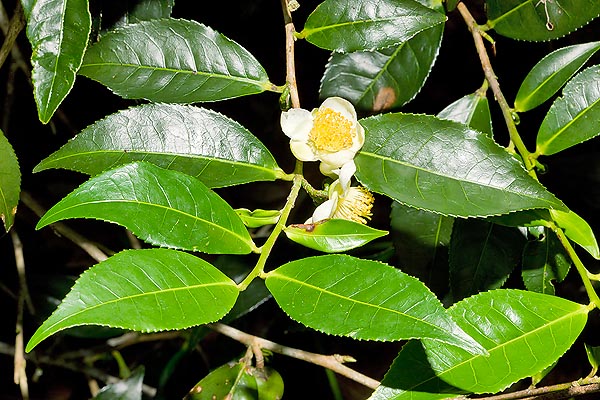 The Camellia sinensis may be 12 m tall, but is cultivated low © Giuseppe Mazza

The plant is native to Cambodia, China (Guangdong, Guangxi and Yunnan), India (Assam), Laos, Myanmar, Thailand and Vietnam, where it grows in the broadleaf forests up to 2.000 m of altitude in tropical and subtropical humid climate zones.

The genus was honoured by Linnaeus to the Moravian Jesuit Jiří Josef Kamel (1661-1706), not for having introduced in Europe the camellia, which he did not know, but because of his studies on the Philippines flora which he signed with the Latinized name Camellus; the Latin name of the species, “sinensis” = of China, refers to one of its origin countries.

The Camellia sinensis (L.) Kuntze (1887) is an evergreen shrub or tree which may be 12 m tall; the branches are greyish, those of the current year are purple red and are covered by a thin white tomentum with silver grey apical buds.

The alternate leaves, on a short, about 0,5 cm long, petiole, are oblong or elliptic, 5 to 14 cm long and 2 to 6 cm broad, coriaceous, glossy dark green on the upper page, pale green below, with prominent venations and indented margin. The flowers, with a diameter of 2,5-3,5 cm, axillary, solitary or in groups of 2 to 5 on a 0,5-1 cm long peduncle, appear by late autumn, early winter; they have 5, 0,5 cm long sepals, ovate and ciliate on the edges, glabrous or with a thin white tomentum, and 6 to 8 unequal white petals, obovate, 1,5-2 cm long and 1,2-2 cm broad, with rounded apex. The stamina are numerous, yellow, showy, of an average length of 1 cm. The fruit is a globular-depressed capsule, 1-1,5 cm tall and with a diameter of 1,5-3 cm, containing 1 to 3 brown, globular seeds. 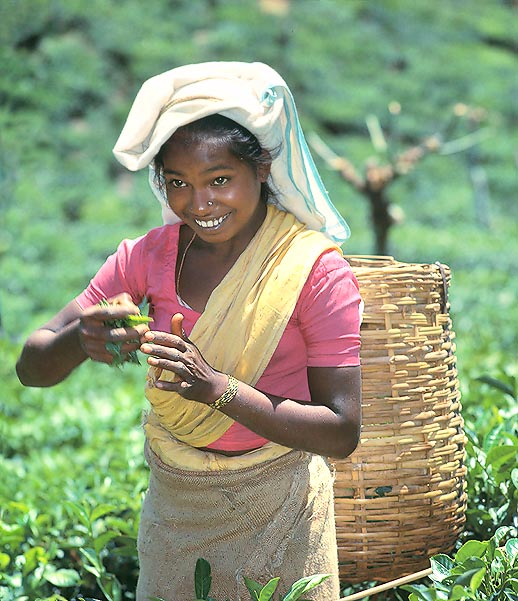 The black, green and oolong teas originate from different treatments of leaves © Mazza

It reproduces by seed, which takes 3-4 months for germinating, and, mainly, by cutting.

The cuttings are to be kept in a vivarium for about one year before to place them in the soil; when the plants reach a height of about half a metre, are to be drastically pruned to about ten centimetres; this pruning gives the plant a flared look with a bigger amount of apical buds in the upper part of the plant.

In the low altitude plantations, the harvest of the leaves may begin already by the second-third year of implantation, in those at higher altitudes, cooler and consequently with a minor growing speed, starting from the fifth year.

The Camellia sinensis needs acidic or neutral soils and high atmospheric and soil humidity; the last one in any case is to be kept well drained for avoiding dangerous stagnations.

It grows in full sun as well as in partial shade and may bear (the sinensis variety) for a very short time, with few damages, temperatures as low as -6° C.

In cultivation, the plants are kept low, at a height of 1-1,5 m, by means of periodical pruning which have the aim to stimulate the production of the leaves and for facilitating the harvest, which is still now handmade for the best quality teas, even if the mechanic harvest is more and more utilized.

In particular, only two apical leaves are harvested (three for a product of lesser quality) along with the bud; in fact, into them is concentrated the maximum of the enzymes, the polyphenols (about the 30%) and of the caffeine (4%) which characterize this drink; the plantations at higher altitudes give a minor yield, but a better quality, the slower growth, in fact, guarantees their bigger concentration.

Depending on the climate, the harvesting may be done during all the year round or in particular seasons, for instance, in the monsoonal climate zones the same is done during the dry season at 1-2 weeks intervals.

The harvesting time is one of the many factors influencing the characteristics of the produce. 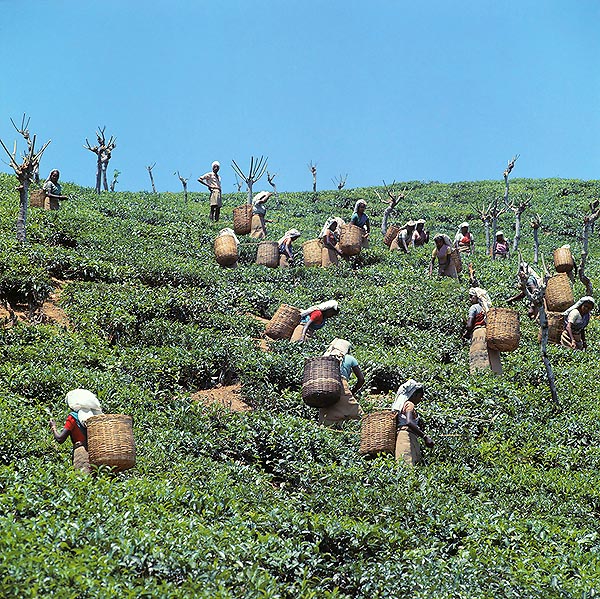 A vast cultivation of tea in Sri Lanka © Giuseppe Mazza

India and China are the main world producers, followed by Brazil, Argentina, Sri Lanka and Kenya.

There are three main typologies of tea, black, green and oolong, differing only for the treatment to which are submitted the leaves; treatment which must begin at the earliest after the harvesting and which will confer the different characteristics of the final produce.

The black tea, the most popular, represents more than the 80% of the production, is obtained drying up only partially the leaves, distributed on appropriate shelves such as to favour the contact of the air over and under them, which was done, in the past, under the sun, nowadays in dryers, till when the are soften up and become flaccid.

Then, the leaves are hand-rolled, for the first quality teas, or by machine, with consequent breakage of the cellular membranes for releasing the essential oils and the enzymes, and distributed on shelves in a homogenous way by means of rollers to make them ferment (actually, it is not matter of fermentation, but of oxidation, the term however, even if improper, has become of common use), for 2-6 hours at a temperature of 21-27 °C.

During the fermentation, the quantity of tannins decreases, rendering the tea less astringent, and the enzymes oxidize the polyphenols contained in the leaves, such as catechins and gallocatechins, forming flavoinoids, in particular theaflavins, of yellow colour, and thearubigins, of brown-red colour, which change its colour.

The fermentation process is stopped at the desired time by passing the leaves in a room with an entrance temperature of about 90 °C for approximately 30 minutes which reduces the humidity contents to the 3% and gives the leaves the typical colour of the black tea, whose taste and aroma is the result of the oxidation process and successive exsiccation.

The tea placed in the trade is usually blended before wrapping, if at this stage the humidity contents increases over the 5%, it must be exsiccated again; the packaging must be designed to prevent the absorption of moisture and odours.

The green tea, which represents about the 15% of the total production, is obtained without the preliminary partial exsiccation and successive oxidation. 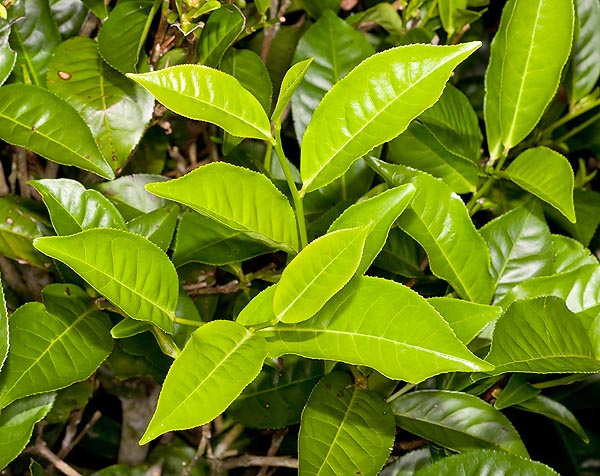 Only the apical leaves are collected. The first two are the best ones © Giuseppe Mazza

Therefore, the contents of theaflavin and of thearubigin in the final produce is lower than the one of the black tea, whilst is greater the contents of polyphenols with antibacterial, anti-inflammatory and antioxidant properties.

The leaves are brought to high temperature on a heated metal plate, the heat destroys the enzymes preventing the oxidation; they are then rolled, exsiccated and crumbled.

The drink obtained has a pale green-yellow colour and an aroma which totally differs from that of the black tea.

The green tea is the one having the major beneficial effects on the health, due to the high contents of polyphenols, but contraindications do also exist, for instance, it has a high contents of vitamin K (about 5 times that contained in the same weight of black tea), and therefore it is not advisable a customary use for the subjects having a risk of thrombosis who assume warfarin as anticoagulant, as it will reduce its effect.

The oolong tea (or red tea), is obtained from a process similar to the one of the black tea, but with a minor initial exsiccation and a short oxidation (1-2 hours) at the sun before the final warming and exsiccating process; the length of the exsiccation and oxidation greatly affect the final characteristics. Oolong is the English transcription of the Chinese name Wu-long, meaning black dragon, but perhaps is coming simply from the shape the rolled leaves were assuming in the old process, shape which was recalling the classical Chinese dragon.

There are several other “minor teas”, for production, but not for quality, among which stand the white and the yellow teas.

The white tea is the one which undergoes less processes, for its production are utilized the apical buds not yet open, of silvery grey colour, from which the name, of some specific Chinese varieties; the exsiccating time is very small, practically is the time standing between the harvest and the arrival in the place where they are submitted to exsiccation, once in the sun, but nowadays, more frequently, in particular dryers at low temperature. 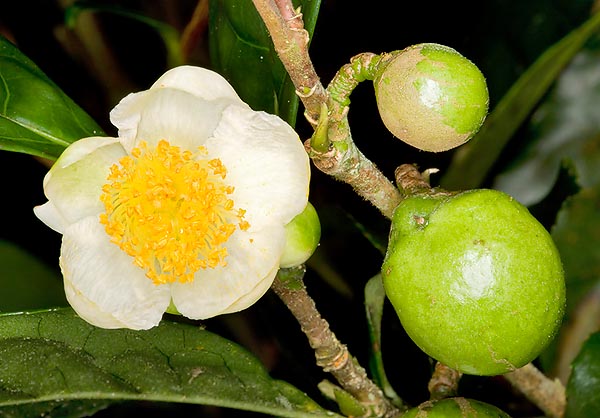 Detail of flower and fruit of Camellia sinensis © Giuseppe Mazza

It is a rare tea utilized almost exclusively in China and holds the highest contents of antioxidant and anti-inflammatory polyphenols.

The rarest tea is the yellow one, with its particular delicate taste, produced only in China and in limited quantities. Like the white tea, only the apical buds are utilized; they are brought to high temperature, but less than that of the green tea, then rolled by hand and submitted to a slight exsiccation for more than one day, during which the get a slight oxidation becoming yellow.

The great popularity of this drink, like the coffee too, more than for the aroma, the taste and the real or presumed beneficial effects of the active principles contained, comes mostly from the presence of the caffeine, known the central nervous system stimulant alkaloid; the caffeine increases also the gastric secretion and has a diuretic and analgesic effect.

A cup of tea contains approximately 50 mg of caffeine, whilst a coffee one contains 3-4 times more of the same. We have not to forget, however, that the effects of the caffeine are not always good for the health, and that the utilization, and not only, of course, the abuse, of these drinks has also many contraindications. The caffeine is a rare compound in nature, only six genera of phanerogams do have some species capable to synthesize this alkaloid, which are the Camellia, Coffea, Theobroma, Cola, Ilex and Paullinia.

It seems that the utilization of this drink has been introduced in China from India in remote times; the same was initially and for long time utilized as medicinal plant for the treatment of countless sicknesses and ailments. Many legends exist about the utilization of this drink in China, the first historical documents trace to the IV century A.D. whilst its introduction in Japan, effected by Buddhist monks, dates from the VIII century.

During the Mongol domination, the use of the tea in China was forgotten; there are no documents of that period telling about the same, Marco Polo (1254-1324), shortly hints of this, but not as a common drink, but as a yearly tribute to the emperor. The drink was back in vogue with the Ming dynasty (1368-1644). 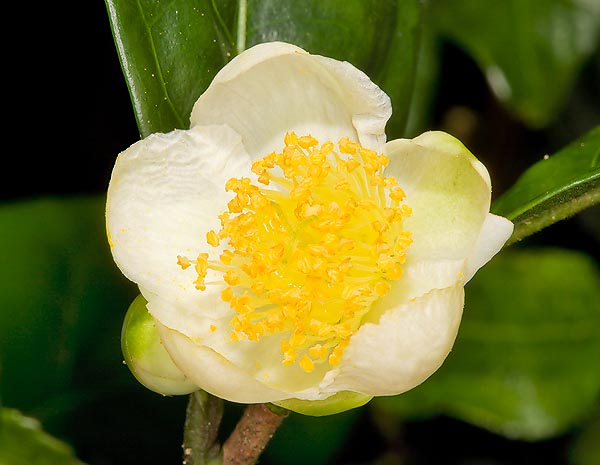 In its perfect simplicity, the candid flower recalls, and not by chance, the camellias © Giuseppe Mazza

Detailed information about its medicinal properties is found in the Li Shih-chen (1518-1593) herbarium and it is during this dynasty that the complex ceremonial of the tea is codified.

The tea arrived in Europe during the XVII century, thanks to the English and Dutch navigation companies, and had a quick diffusion, especially in England. Though the Chinese name is cha, in Europe it has come with the dialectal name used in the province of Fujian, where it is rightly pronounced “tea”. This dialect was spoken also in the city of Xiamen, the first Chinese port open to the trade with the Europeans (first of which were the Portuguese).