The two humps Camel or Asian (Camelus bactrianus – Linnaeus, 1758) is the other species afferent to the family of the Camelidae, suborder Tylopodia, see text Camelus dromedarius. It is widespread tamed in all central and eastern Asia, where its domestication, after some Chinese documents, should date back to more than ten centuries B.C.

Nowadays, in the Gobi Desert do live some feral herds of these animals, and in the eastern Turkestan are found herds whose individuals have rather small humps and which are considered by some zoological biologists, as still wild, as a race or subspecies of the nominal species, the Camelus bactrianus ferus.

There are, in reality, after the biologists, several races of camels, differing between them due to the proportions of the limbs and of the humps, and also for the length of the coat, which, in the winter season, in some races apt to bear the very rigid temperatures of the highlands of central Asia, may reach the soil.

Like the dromedary, when we talks about the countless services and of the irreplaceable aid that this animal gives to the man, we risk to fall into the rhetoric. It nevertheless remains in fact that the Camelus bactrianus was, and still is, used as mount, as well as beast of burden, at times yoked to the plough, in regions so much arid no to allow the utilization of the oxen. 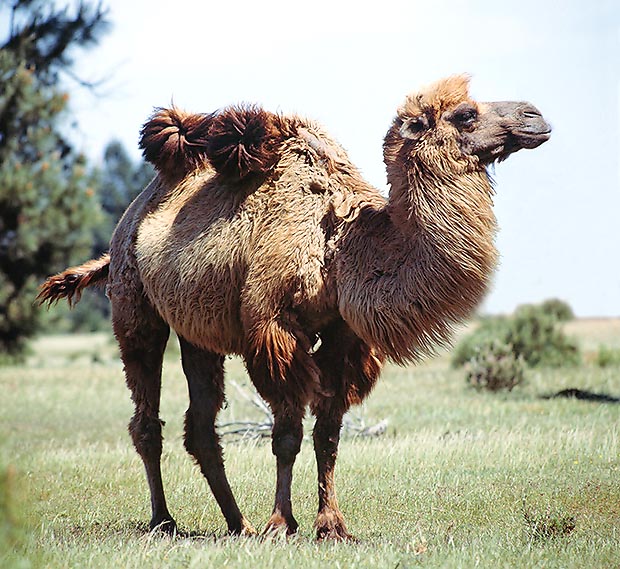 Also the flesh forms among certain populations an important economic resource. Furthermore, the camel’s milk replaces among some populations and in all usages, our cow’s milk. Fleece and skin are utilized for making fabrics, curtains and clothing; even the dung is utilized as fuel and for the construction of huts.

Enormous is the resistance this animal opposes to the most extreme climatic conditions, easily bearing intense heat and cold, and being able to remain without drinking for several days (for the physiological aspects, please see the text of the Camelus dromedarius). Popular today, among the nomadic Asian populations (Kurds, Kyrgyzes, etc.), it is able to travel even fifty kilometres per day, transporting a burden up to two quintals.

The two humps or Asian or Bactrian camel (Camelus bactrianus) is autochthonous to central Asia, Mongolia, northern China, in particular to the Gobi Desert, for the wild species; the tamed races are found also in Kazakhstan.

Extremophilic environments, arid, desert and stony grounds with extreme temperature changes. In the Gobi Desert, in summer there may be a difference of 40-50 °C between the day and the night; and, in winter, due to the strong winds and the altitude (we are between the 800-1400 m above sea level) it is much colder than in the Sahara, and it is not rare to encounter dunes covered by frost and snow.

The Camelus bactrianus measures 2,10 of height from the lower extremity of the limbs to the extremity of the humps. When galloping, it reaches the 25 km/h, walks at amble and the walking speed is of 3,5 km/h when it is utilized for carrying heavy loads. The dental system is the same as the Camelus dromedarius and, like this one, has a 40-50 cm tail. For what the physiological mechanisms are concerned, utilized for compensating the dehydration and that allow it to live in arid habitats without drinking for several days, please see the text of the Dromedary.

The Camelus bactrianus) from the other Artiodactyls (Artiodactyla) due to the skeleton of the extremities which have only the third and forth toe, whose metapodes (that is the metacarpi for the fore legs and the metatarsi for the hind ones, of the third and forth toe), are soldered together forming the “cannon bone”, whilst the second and fifth toe are completely missing; the nails are not very big, and the foot stands on two calloused soles, which is an anatomical adaptation very useful for walking on the much unstable grounds of the desert zones. 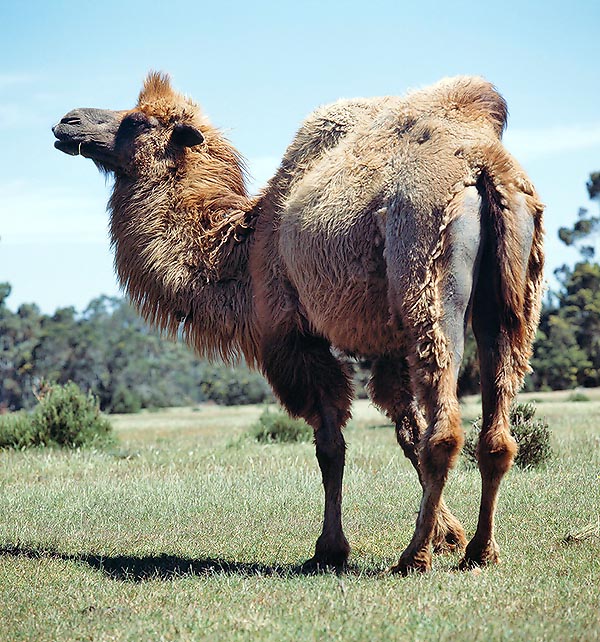 It differs from the dromedary due the two humps, thick coat and solid look © Giuseppe Mazza

However, the Camelus bactrianus, is native to cold climates, and for this the biologists think that this specialization as generated as adaptation for snowy soils.

Therefore, we can say that, like the Horse (Equus caballus), which has the most evolved structure in the perissodactyls, the camel has reached the most advanced model of artiodactylous foot.

The have the dental formula equivalent to that of the Camelus dromedarius, 1/1; 1/1; 3/3; 3/3, with two more premolars compared to the llamas and tubular teeth.

Common character to all members of the suborder of the Tylopodia, and which differentiates them (besides the anatomy of the digestive system) from all other ruminants, is still the possession of a pair of superior incisors when adult, whilst in the young specimens are present from two to three pairs of them; furthermore, also the superior canines, absent in the other ruminants, are always present.

In the digestive system, at the level of the “rumen”, like the dromedary, are present some diverticula, called “aquiferous cells”, which may absorb a remarkable quantity of water which, as seen, explains the proverbial resistance to the thirst of these animals, but it is not a reservoir, contrary to what is commonly thought. Also the red blood cells have an odd morpho-physiology, being elliptic instead of lenticular, like in the other mammals. We have briefly said in the text on the dromedary, how this species and the camel are distinct but similar. Close relatives so much that we may easily get hybrids. Essentially, the biologists recognize three differences among the two species, however not fundamental on the zoological point of view.

First of all, the Camelus bactrianus has on the top of the two humps, two big adipose gibbosities, whilst the Camelus dromedarius has only one of them; then, it is more robust and stockier, whilst the dromedary is more slender; finally, its hair is more robust, even in its most intimate morpho-physiology, thick and long along the neck, dorsally and ventrally, whilst the dromedary has a shorter mantle and a slight down on the neck, more suitable for always very hot habitats such as the Sahara Desert. The colouration may be dark brown as well as tawny, reddish or white.

It usually reproduces in January-February. Also here the female has single and very difficult deliveries, with a gestation lasting even more than 13 months. The mother nurses the cub for 3-4 months and the cub, a few hours after its birth, is already capable to follow her.

The male shows the same phenomena of sexual attraction as the male dromedary, during the heat periods: lachrymations, swelling of the pink lingual bladder like a balloon and deep rumbles and gurgles (please see the text Camelus dromedarius).