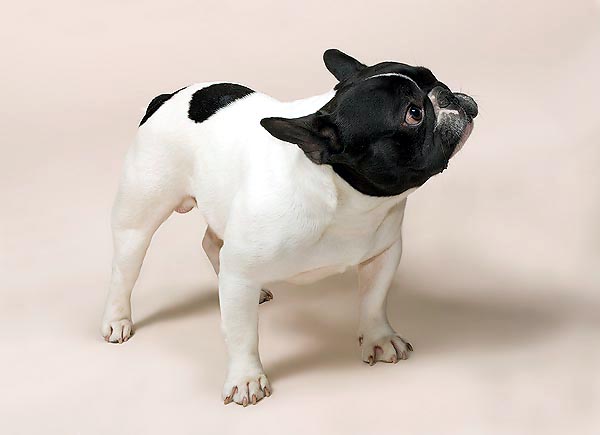 With a likely origin from the English Bulldog, the FCI recognizes officially the breed, awarding its nationality to France.

And that is right, as it’s in this nation that the French Bouledogue has reached a proper selection.

It was utilized as a ratter in the Parisian outskirts. It was accompanying normal persons, lamp-lighters, workmen, butchers.

The spirit of a “ratter” was transmitted by possible crossbreeds with terriers of the time, and from these ones, it inherited also the stiffness of the cartilages of the auricles which have originated the typical shape and appearance, called “bat ears”.

As by those times the dog fights were very common, also this small dog met that bloody experience, which, anyway, mad it known.

More and more selected, the French Bulldog, started to introduce itself with a certain homogeneity of type, winning the attention of upper classes, so much to become one of the favourite breeds of the “demi-mondaines”, and of the French aristocracy. 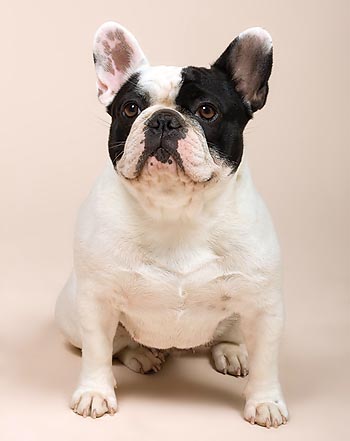 The Bouledog Français is in fashion © Giuseppe Mazza

Thus it loses its innate aptitude to the fight and become the very sweet and nice dog we know nowadays.

In its overall appearance, we find a typical bulldog, even if on a reduced scale, a compact dog, well structured in all its shapes, solid and powerful.

Its hair is short, in its fawn colour, which includes all gradations of the colour, and we can also admire it with brindled and caille colouring.

The profile of the dorsal midline goes up slightly on the lumbar region, typical of the type. Broad chest, cylindrical thorax, with bow ribs which originate a barrel thorax.

Retracted belly, solid limbs and small and compact paws. Its weight must range from 8 to 14 Kilos. It’s a difficult breed to select, but in the latest fashion.

And it’s rightly for this reason, that it is good to rely, in case should we decide to have one of them in our house, on the clubs officially recognized, which protect it with their experience, nowadays.

As in all other fields, where also the clubs of breeds are subjects to dangerous counterfeits, from which we have to be on the look-out.