The name of the genus Canthigaster comes from the Greek “Κανθήλια” (kanthelia) = basket and “Γαστήρ” (gaster) = belly, for the capacity these fishes have to pump water into the belly inflating it like a balloon. A way to appear bigger for the mouth of many predators and slide away if they try to catch them. The species amboinensis means in Latin “of Amboina”, an Indonesian island of the Maluku islands, old centre for the trade of the spices.

The Canthigaster amboinensis has a very vast diffusion in the tropical seas of the whole world. In the Indo-Pacific from the African eastern coasts to those of the Baja California up to the Galapagos and in the Atlantic, from the Gulf of Mexico, Caribbean zone and Central America up to Brazil, up to the distant African coasts. 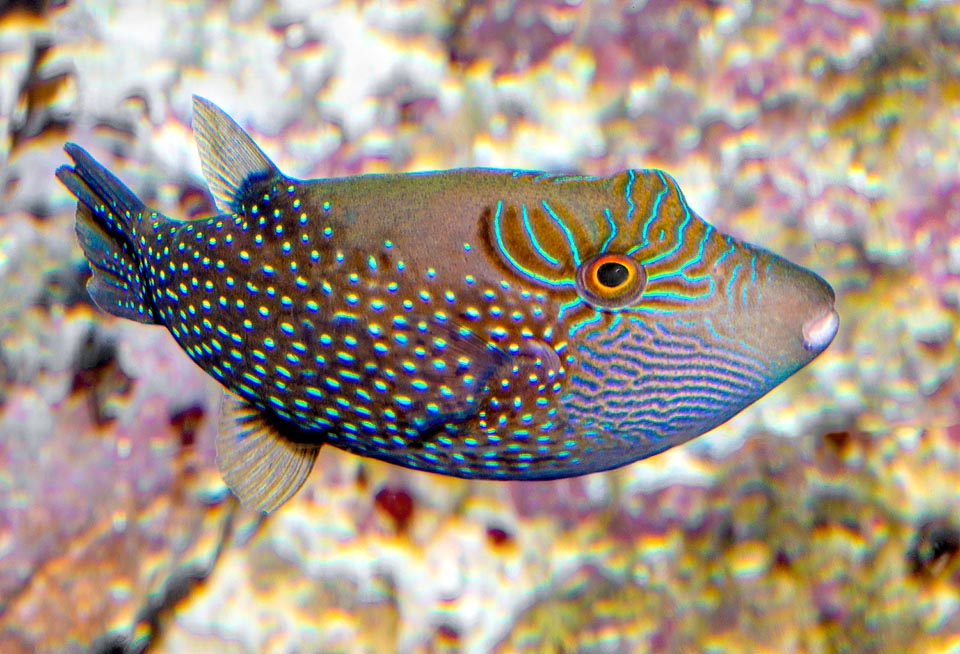 15 cm long, considerable size for a boxfish, the Canthigaster amboinensis is present in the tropical Atlantic and in Indo-Pacific oceans © Giuseppe Mazza

It lives in very shallow waters between the waves of the tidal area, usually at 1-6 m of depth and it is not rare to find young ones trapped in the large rock pools. Rocky coasts, but especially madreporic environments rich of food and of hideouts. In fact, they nourish mainly of algae, the filamentous green but also of bigger species among between the thalli of which they enrich the diet with small crustaceans, molluscs and small worms, without forgetting the tunicates and the sponges. Poor animals, visible even from far away, unable to flee and that are chewed up cheerfully such as the polyps of the corals.

The echinoderms do not have a better treatment: small sea urchins and mainly brittlestars, frail marine stars with long thin arms reduced then to stumps.

15 cm in size are of more than a considerable size for a Canthigaster. For the rest it follows the typical pattern: no scales and a subcutaneous armour provided, as usual, of the vital openings for the eyes, the mouth, the fins, the gills and the anus. 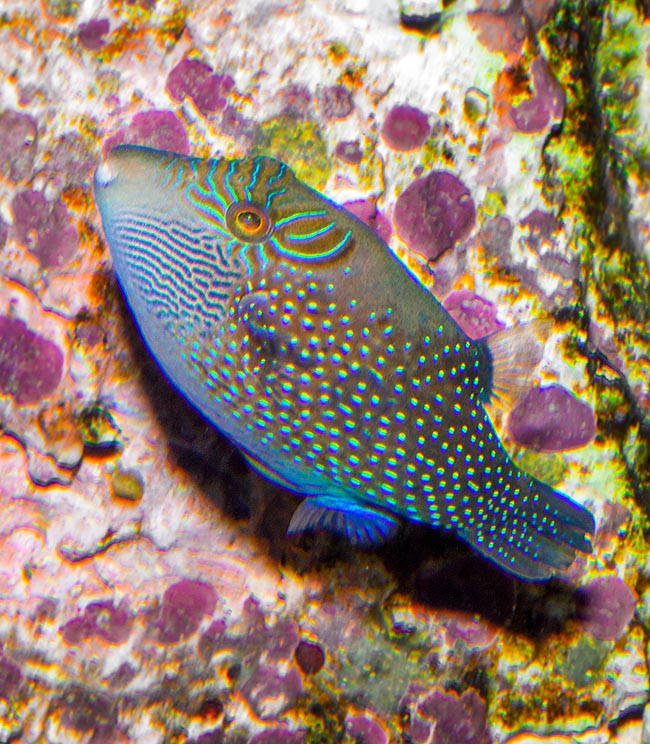 To discourage the predators, like all Canthigaster it can gulp water and enflate the belly disproportionally, like a balloon. Moreover, the skin and the bowels contain tetrodotoxin, a powerful venom elaborated by symbiotic bacteria © Giuseppe Mazza

The muzzle, placed in advanced position, shorter than that of the small congeners who are obliged to look for the food inside the holes, has the characteristic beak of the Tetraodontidae, formed by two incisor teeth per jaw, whilst in the Diodontidae they merge in one only element.

Like for all Canthigaster, the ventral fins are absent.

The pectorals serve mainly for maintaining the trim and for precision displacements.

The livery is particularly elegant.

The blue turquoise camouflage lines that start radially from the orange eye, detach on the background dark brown colour.

Further down, on the sides up to the belly, parallel wavy traits adorn with blue lines the fore part of the fish and then there is a constellation of blue specks that become more intense on the tail.

What is for us pure beauty is actually serving as a camouflage suit in the colourful world of the corals.

A certainly winning formula, seen the enormous diffusion of this species, who, moreover, knows how to make itself respected by the predators not only inflating but also for the presence on the skin and in the bowels of the tetrodotoxin, the powerful venom of the puffers elaborated by symbiotic bacteria. 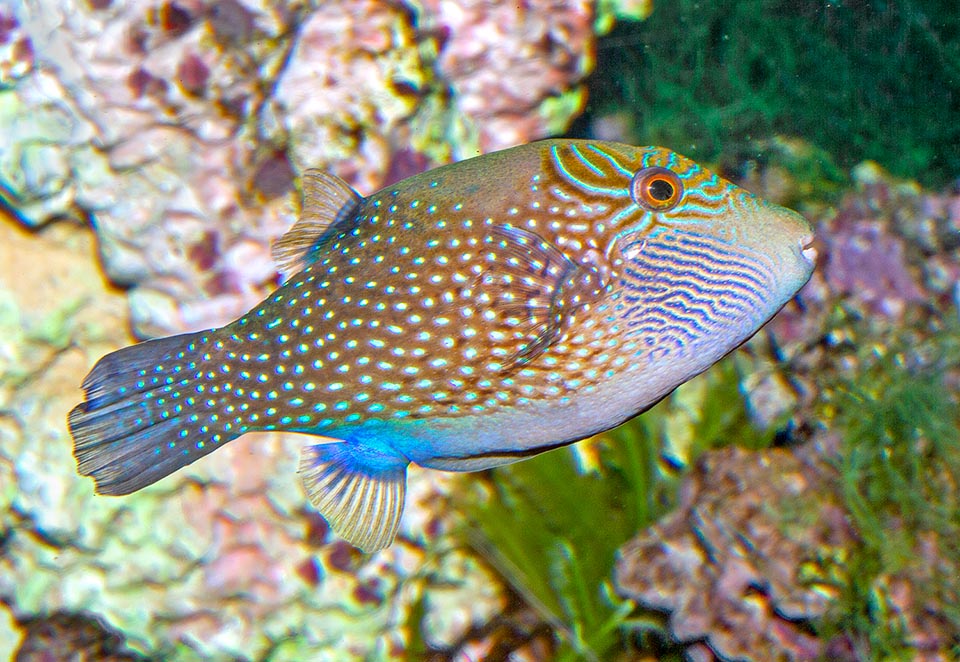 The dazzling livery, besides reminding to the intruders this hidden weapon, is an excellent mimetic suit and the species, practically omnivorous, is surely not in danger © Giuseppe Mazza

If there is a female ready lay, it is there. The partner chooses the nest, usually a well protected crack, and lays the eggs in many times. It observes and can fertilize them while the female takes a breath or at the end, expelling it, more or less gently if the space is narrow, in order to complete its job. The female remains alone, surveys for about 15 minutes the nest, and then goes away convinced of having done its own duty.

The hatch occurs a few days later and the larvae get dragged by the currents.

The resilience is good, with populations that can double in less of than 15 months, and seen the enormous diffusion of the species, nowadays (2019) the vulnerability index of the Canthigaster amboinensis is very low, marking only 13 on a scale of 100.