The name of the genus Canthigaster, comes from the Greek “Κανθήλια” (kanthelia) = basket and “Γαστήρ” (gaster) = belly, due to the possibility of inflating the belly of water, like a basket, in order to appear bigger in case of aggressions.

The species solandri recalls the Swedish Daniel Carlsson Solander, pupil of Linnaeus, who accompanied Capt. James Cook in Australia and New Zealand on-board of the Endeavour. 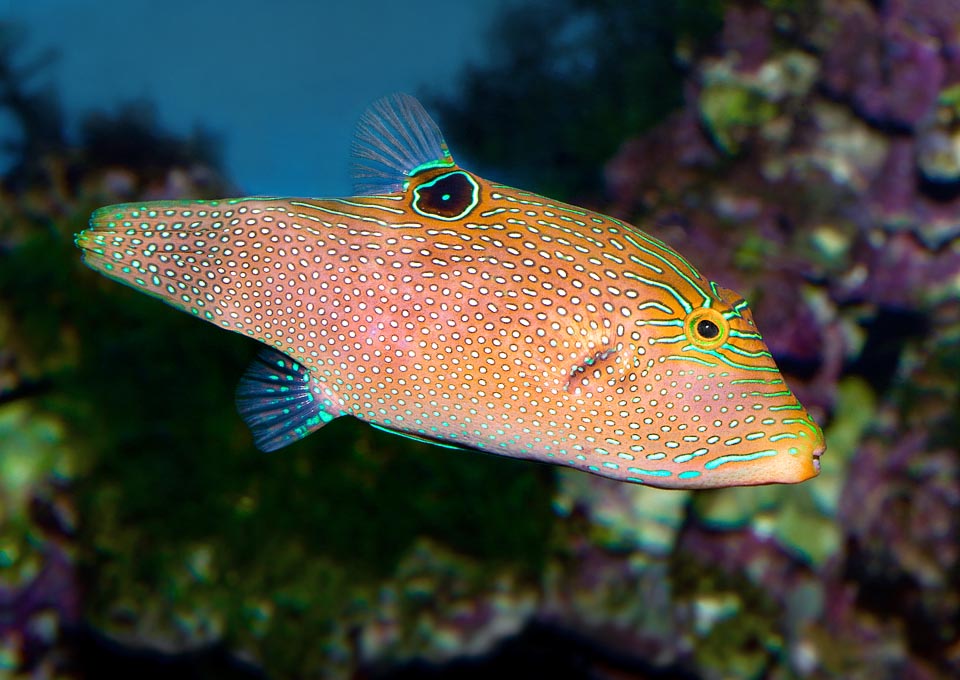 Present in Oceania, the Canthigaster solandri has no scales but an armor covered by a colorful venomous skin © Giuseppe Mazza

If we want to be restrictive the Canthigaster solandri is therefore a species of Oceania present from the Mariana Islands to French Polynesia, with presences, as an indication, in Micronesia, in the Marshall Islands, Caroline Islands, Salomon Islands, Wallis and Futuna and in New Caledonia.

It lives in relatively shallow waters, between the 10 and 36 m of depth. Rocky coasts, lagoons, and both sides of the reefs.

It is a small fish, of oval and squat shape, that is just over the 10 cm. It displays the typical structure of the trunkfishes: no scales and an underskin armour equipped with small openings at the eyes, the mouth, fins, gills and anus. The muzzle, elongated, narrows in a funnel towards the mouth, placed in advanced position with the characteristic beak of the Tetraodontiformes formed by the two incisors per jaw. 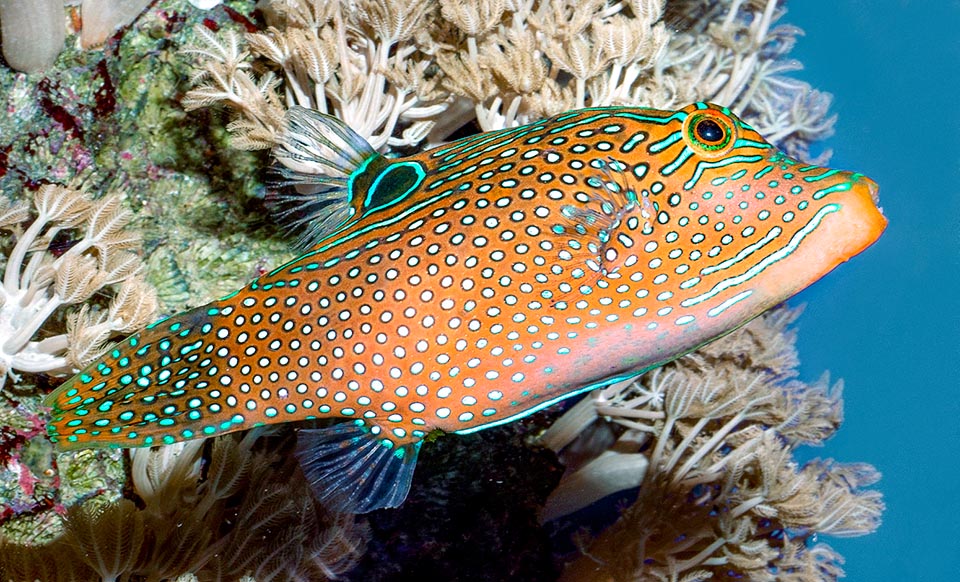 The males, bigger than the females, display less thick speckling but with polka dots of bigger diameter © Giuseppe Mazza

The body and the caudal fin have a reddish background colour, fading to orange towards the mouth, dotted by dense light punctuations with more or less turquoise shades such as the bands straddling the muzzle and close to the eyes that we find again more or less fragmented on the back and starting from the mouth to the belly. The males, bigger, show a less thick punctuation but with polka dots having a larger diametre.

Typical is, anyway, the dark ocellus at the base of the dorsal fin encircled by a turquoise stroke, often almost fluorescent like the possible small dot at the centre. A fake eye to confuse ideas to the predators that adds, on the defensive level, to the capacity of inflating the belly of water, like a balloon, to astonish and not to be seized, and at the presence in the skin and in various organs of the tetrodotoxin, the powerful venom of the balloonfishes developped by symbiotic bacteria such as the Pseudoalteromonas tetraodonis and associated to colourful liveries to warn the intruders. 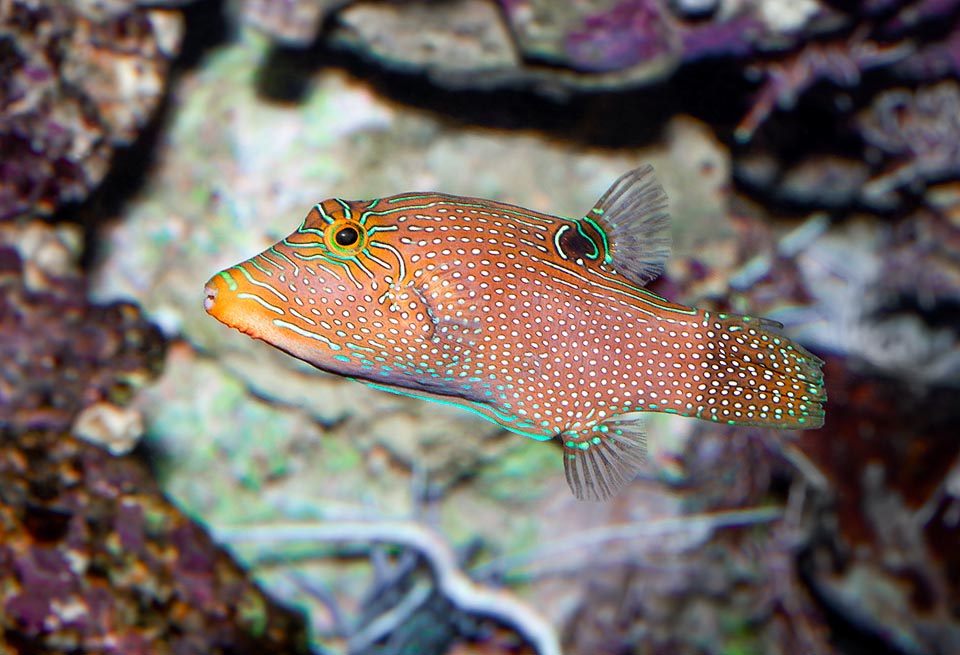 The Canthigaster solandri is omnivorous. It cares the reefs nourishing mainly of the filamentous algae infesting the corals, except when, without too many scruples, it eats their polyps and nibbles sponges, ascidia or echinoderms. Finally, it eats all what it finds without making too much effort, including the small crustaceans, the molluscs or the tasty little worms that fall in its dish.

It is a species living in pairs or in small groups. The males, very territorial during the reproductive period, at times have a small harem. The spawning takes place in nests improvised by the female between the algae. The eggs, immediately fecundated, will hatch after a few days.

The resilience is good, with populations that may double in less than 15 months, and nowadays (2019) the index of vulnerability of the species is extremely low, marking only 11 on a scale of 100.