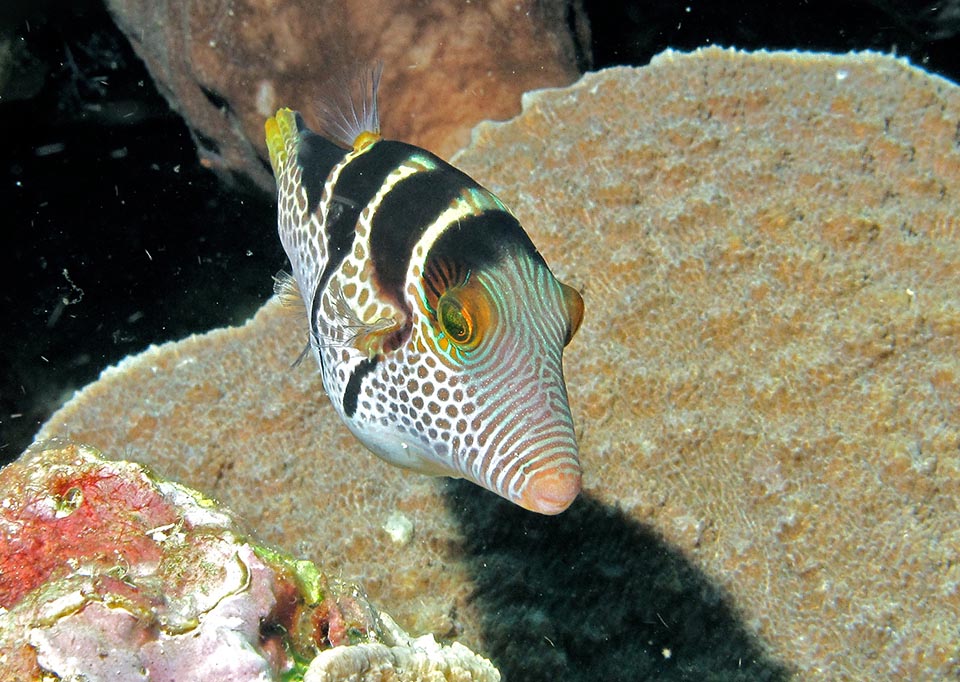 With its funny snout narrowing into a funnel towards mouth, the Valentin’s sharpnose puffer (Canthigaster valentini) has a vast distribution in the tropical Indo-Pacific © Bernard Dupont 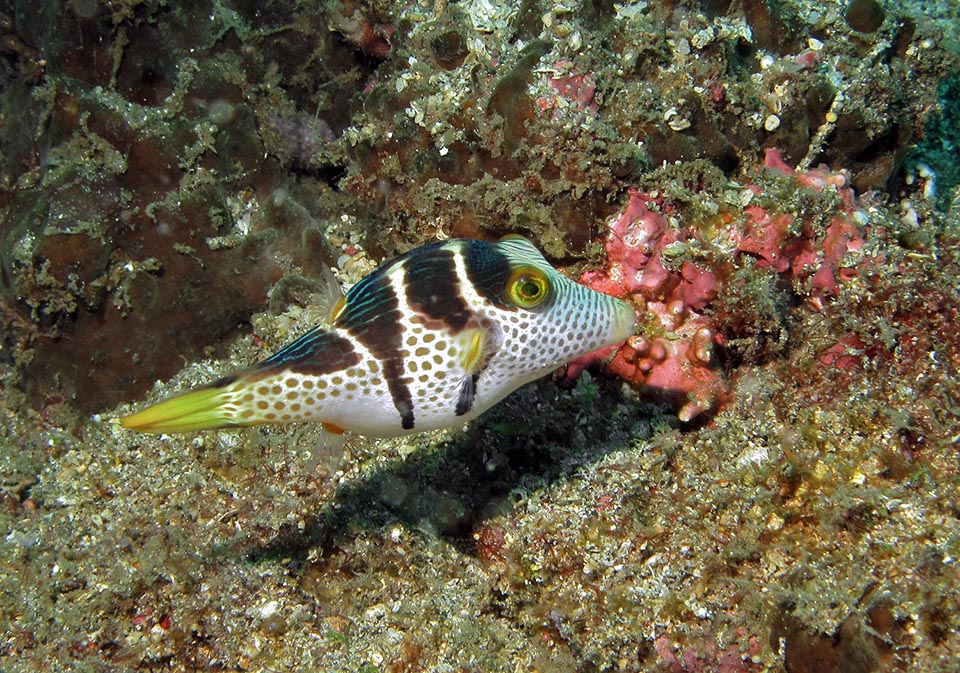 At most 10 cm long, roundish towards the back and even more on the belly if has eaten well, usually lives in shallow waters and is rare at 50 m © Bernard Dupont

The name of the genus Canthigaster comes from the Greek “kanthelia” – baskets and “gaster” = abdomen. It is, finally, a fish with the abdomen shaped like a basket.

There is no precise information about the origin of the name of the species, valentini, of Valentin, in Latin. It might honour the memory of the German physician and physiologist Prof. Dr. Gabriel Gustav Valentin (1810-1883) or, possibly, seen the geographical distribution of this fish, of the Dutch priest François Valentijn, great traveller and malacologist (1666-1727) who spent many years in the Maluku Islands and in the eastern part of the island of Java. 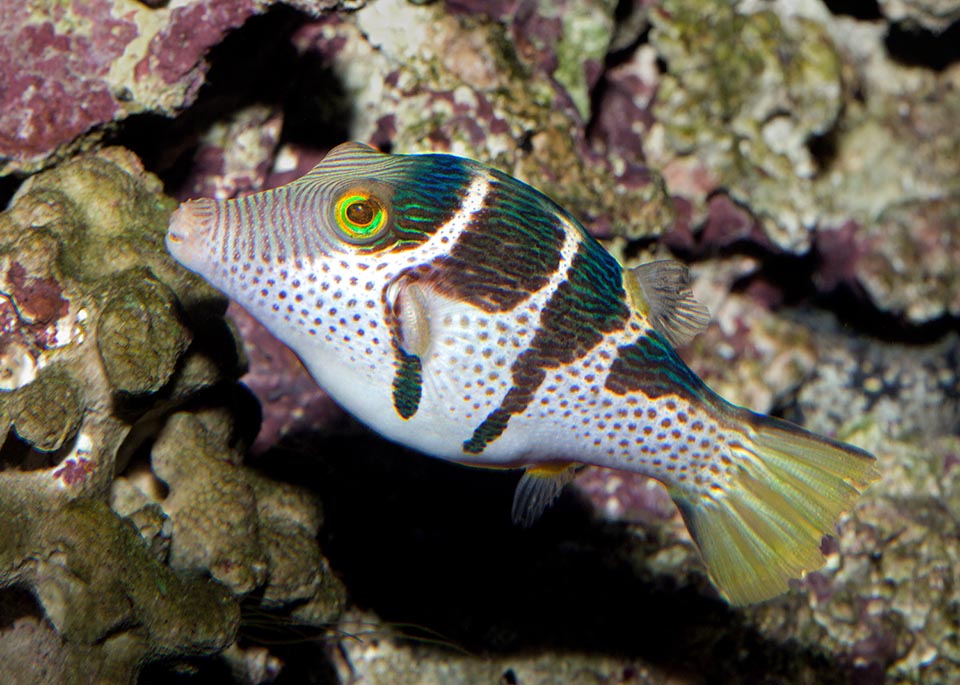 Like all tetraodontids, it has 4 teeth only, two per jaw, that form a small beak. The caudal fin, often closed, opens out like a fan for the quick movements © Giuseppe Mazza

The Valentin’s sharpnose puffer has a vast distribution in the tropical waters of the Indo-Pacific. We find it, indicatively, from South Africa up to the southern part of the Red Sea and in the Gulf of Aden, in the Seychelles, Mauritius, Chagos, Cocos, Réunion, Maldives and Andaman islands, in Indonesia, Australia, New Guinea, Micronesia, Philippines and Taiwan up to the southern part of Japan. Estward, it has colonized the Samoa, Tonga, Cook and Tuamotu islands. Southward, in the Pacific, the Great Barrier Reef, New Caledonia and Lord Howe Island. 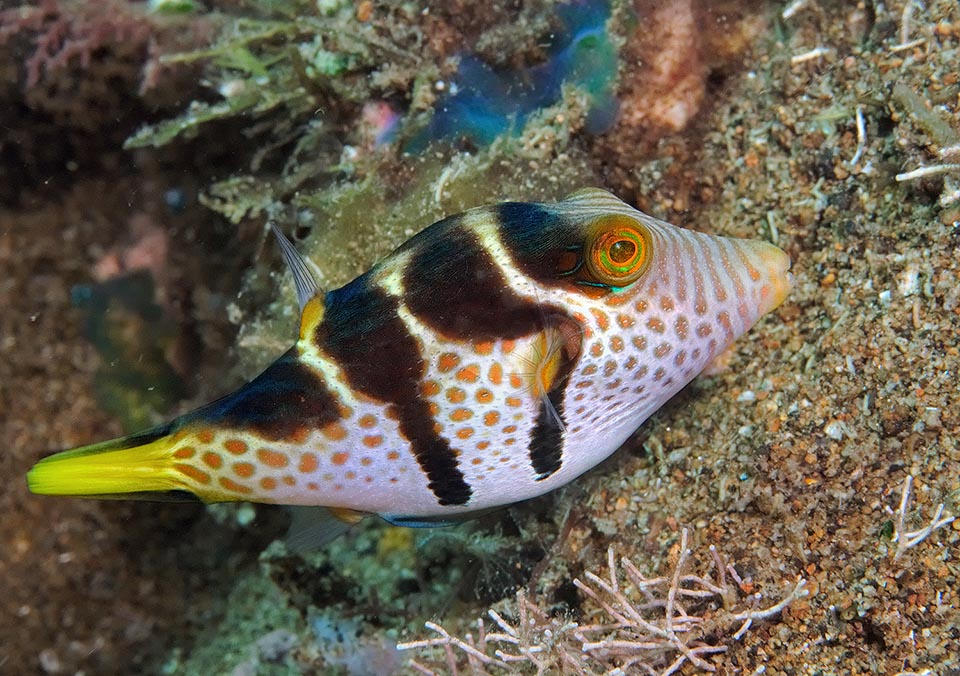 It lives amongst the madreporic formations, mainly in shallow waters, up to about 50 m of depth.

It is a 10 cm small fish with a funny and cute look. Roundish on the back and even more on the abdomen, when it has well eaten, with the snout narrowing like a funnel towards the mouth placed in advanced position and two incisors for the jaw forming a small beak like all tetraodontids. 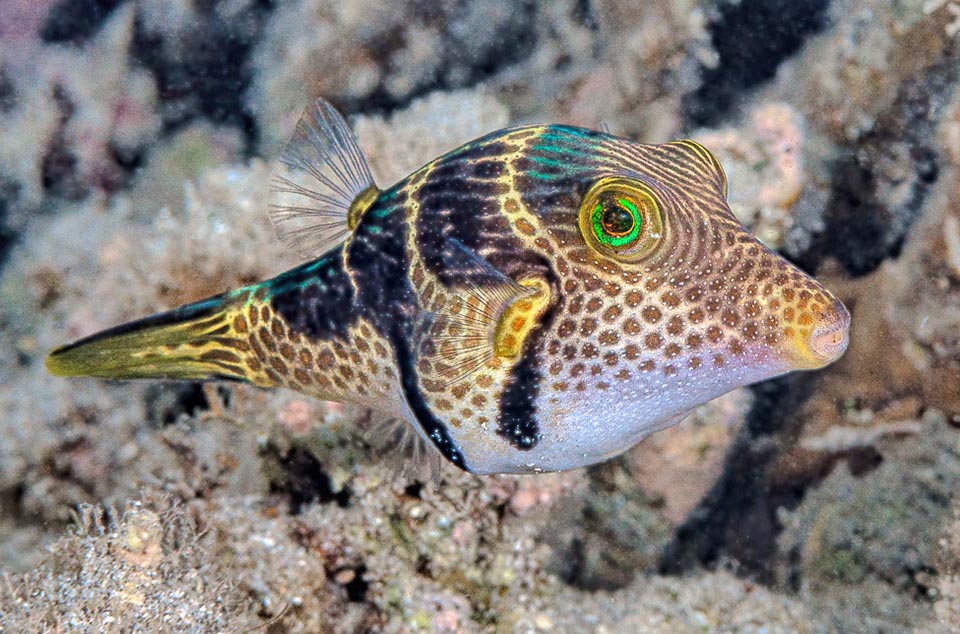 It’s a territorial species, with males that have a harem and assign to each female a zone of their small kingdom © François Libert

Also the scheme of the fins is the classical one.

The mobile and colourful eyes, protruding on the head, are very expressive, sided by a characteristic blue-green drawing on orange background prolonging in the four dark zones of the back which have granted it the common epithet of Valentin’s sharpnose puffer 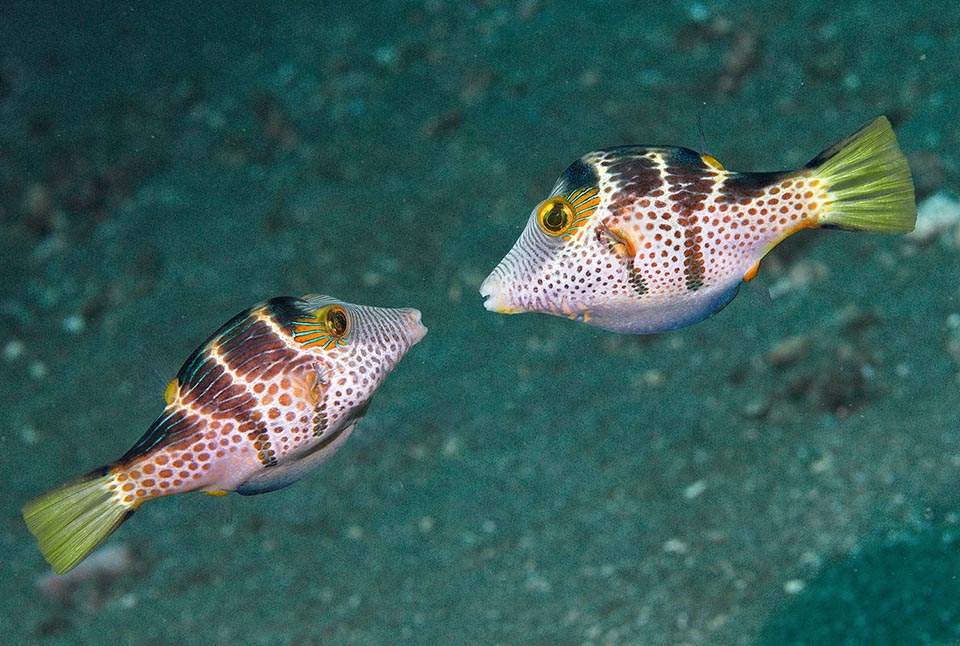 They monitor the territory, often arguing with the neighbouring males and allowing only females to enter, usually contenting of 7 © Klaus Stiefel

The second and third spot reach, tapering, the ventral zone, whilst the last one dyes black the upper edge of the yellow caudal fin. On the whitish background colour of the body stand out uncountable ochraceous spots which merge forming parallel stripes on the snout, rotating around the eye on the front.

The scaleless skin is protected by poisonous mucus. This is the famous tetrodotoxin, which renders it theoretically poisonous also for the man, even if nobody would ever think to eat it seen its modest size. Of this take advantage the juveniles of a tropical grouper, the Plectropomus laevis, and a small flefish, the Paraluteres prionurus, which, with analogous livery often mix with the Canthigaster valentini making their predators think that they are as poisonous as the Valentin’s sharpnose puffer, although they are totally harmless. This trick is used by diverse animal species, and is known as Batesian mimicry. 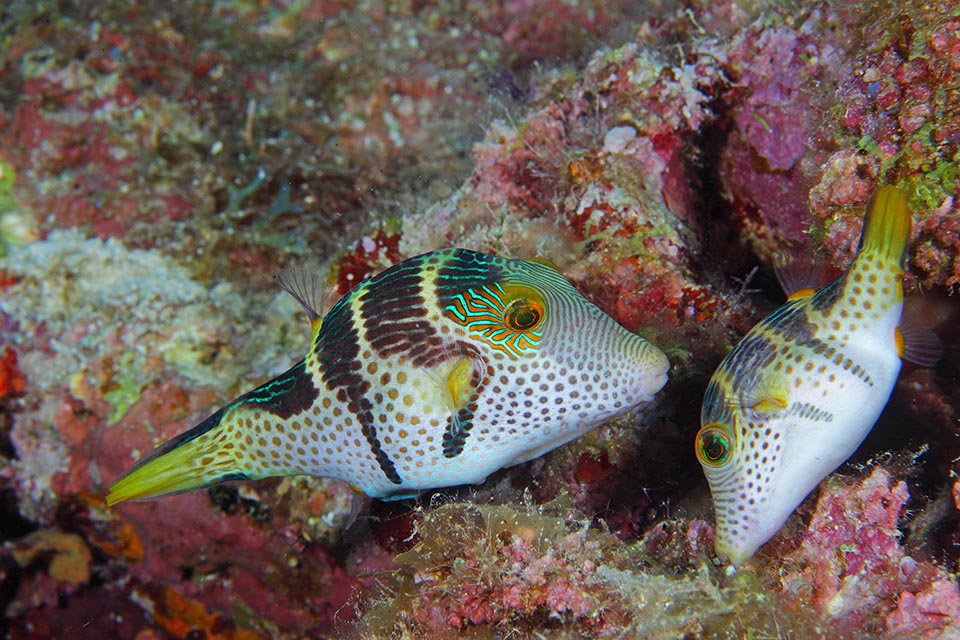 Here’s one waiting for the male. It has dug a nest in the sand in a sheltered zone and is ready for spawning © Klaus Stiefel

The Valentin’s sharpnose puffer is omnivorous. It takes care of the cleaning of the reefs nourishing of the filamentous weeds infesting the corals, but then, unscrupulously, eating their polyps, not to forget the echinoderms, the sponges of the ascidians it merrily nibbles, the small crustaceans, the molluscs and the tasty small worms which fall into its dish.

It is a territorial species dominated by the males that assign each female of their small harem a sector to defend. When one of these is ready for spawning, it digs, early in the morning, a small nest camouflaged by seaweeds in the sand of its territory and flexing the tail, with characteristic movements, informs the male about its availability. 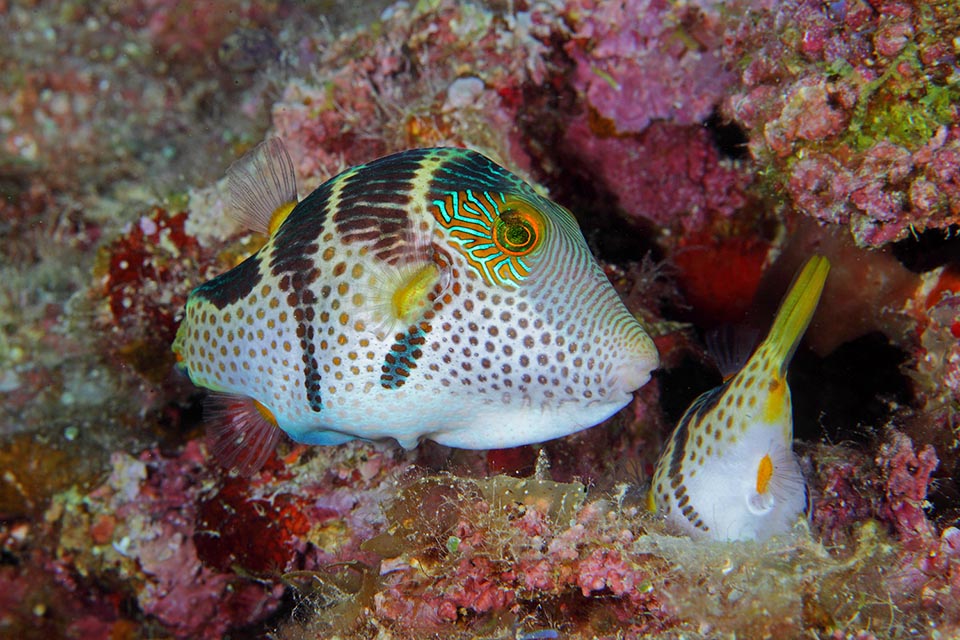 It signals this by wagging the tail in a characteristic way, and the fecundated eggs hatch after 3-5 days. Canthigaster valentini is not an endangered species © Klaus Stiefel

The male, who is regularly patrolling its kingdom, does not need to be told twice and then goes back to the current administration: drive out the young males, satisfy the other wives and attract new females (usually, they content of 7 of them).

The numerous eggs hatch among the seaweeds after 3-5 days. The resiliency is good, with populations which may double in 1,4-4,4 years, and the fishing vulnerability index of the species is very low: just 10 on a scale of 100.