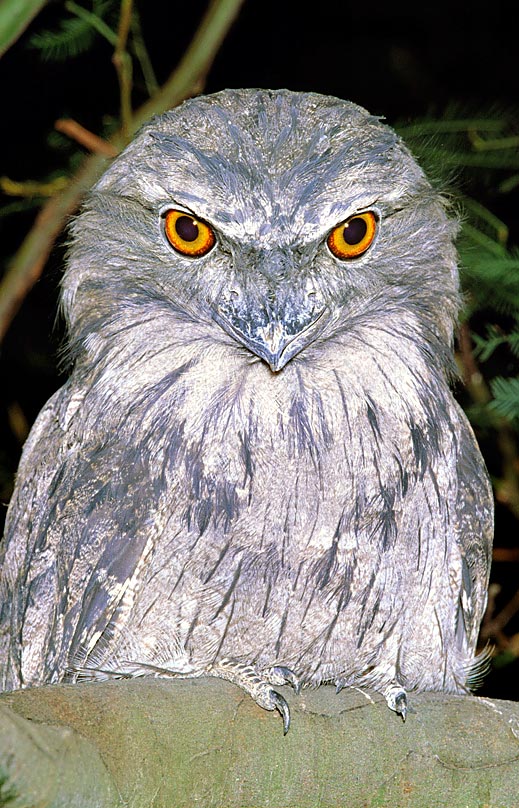 I am not an owl, but a Podargus strigoides © Giuseppe Mazza

They form an order of birds presenting rather homogenous characteristics. The species belonging to the four families of the order all have, as a matter of fact, liveries and behaviours rendering them much cryptic-mimetic in the habitats where they do live.

The plumage is very soft and shows, mainly, grey-brown-reddish colourations with darker and paler streaks, dots and marblings recalling the colourations of the trunks, branches, barks, dried leaves, rocks, of the ground and of the soils present in the distribution ranges of these birds.

All species have great eyes and sharp eyesight. In these birds the hearing is excellent and they are endowed of wide mouths and consequently of beaks ample as extension but small and short as size; the beaks have hooked apices.

All the species, but the Oilbirds which nourish of vegetal aliments, are predators as they mainly nourish of insects and small animals; they mostly have crepuscular-nocturnal habits, their flight is silent.

They have square and voluminous heads. The legs are rather short and little evident (hidden) when they are flying as well as hen perched; the gait on the soil or on the perches is rather awkward and clumsy when it does not even become creeping. They have average size and rather elongated shapes.

This order, with a different distribution of the families and of the extant species, has a practically cosmopolitan distribution having members of the genus in all the continents but Antarctica. The taxonomical classification of the birds belonging to the order of the caprimulgifoms has been object of many revisions and of continuous confrontations; only recently it has been structured with the recognition of the four aforementioned families.

In the past, due to the mainly nocturnal predatory habits, the big eyes, the colour and the silent flight, they have been compared and considered similar to the night raptors (Strigiformes). Other times, due to the long wings and the short legs combined with the conformation as agile and light fliers, they have been considered as similar to the swifts (Apodiformes). Again, other times they have “transited” in orders, belonging to the class Aves, still different. To complicate the whole there has been also the very poor finding of fossil remains of extinct ancestors birds having family ties with the presently extant caprimulgiforms.

To the family of the Caprimulgidae belong birds vulgarly called “Goatsuckers”. This family is distributed with several species in the old and new world. They have medium-small size and a shape reminding that of great brown-reddish-greyish swifts. The buccal opening is very ample going up to under the projection of the eyes and is surrounded by modified feathers of tactile type. The nostrils are partially hidden by the feathers, the neck is short. They have small legs with short tarsi, partially plumed. The three fingers bent forward are merged up the first phalanx. The middle finger has a peculiar nail, shaped like a comb on the inner side. The wings are long and equipped with a ten of primary feathers. The tail is rather long and rounded; it is formed by about ten rectrices and in some species is equipped with particular ornamental feathers even longer than the rest of the tail.

The Goatsucker is called in this way due the old belief that it should enter, during the night, the stables for milking the goats; also the Latin name of the family has the same meaning as well as the name of the order itself which derives, it too, from the Goatsuckers. 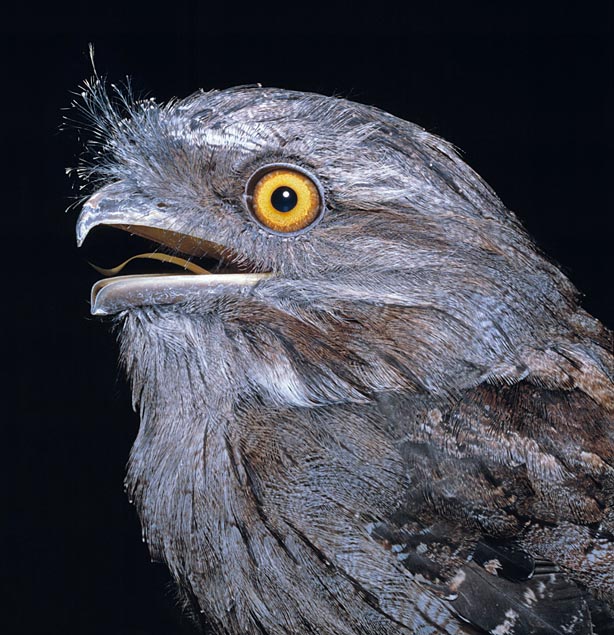 And not even an Apodiformes, but a Caprimulgiformes © Giuseppe Mazza

The origin of this legend came from the habit of this bird of entering the stables and the enclosures where the cattle is sheltered, fluttering and driving out the nocturnal insects which in these places, being attracted by the cattle, are more numerous. The huge mouth and which can be widely opened has contributed the belief that these birds might suck the milk from the udders.

Few birds have received so many names like the birds belonging to the family of the Caprimulgidae: the goatsucker is in fact also known under the name of “Nightjar” due to its nocturnal habits; it has also been called, in Italian, “Ingoiavento” = “wind swallower”, because it flies keeping the mouth open for hunting; another name is “Covaterra” = “hatches on the ground” because stays crouched for camouflaging, seeming hatching also when this is not the case; another name given is “Portaquaglie” = “quail carrier”, because its arrival in Italy coincides with that of the quails (Coturnix coturnix), etc.

The family of the Caprimulgidae counts more than 90 extant species distributed in the Old World (Caprimulgus europaeus) and the New World.

To the family of the Podargidae belong birds of an average size bigger than the goatsuckers; they are also stockier and more massive. They are called “Frogmouths” due to the big mouths they can widely open; many other local names erroneously associate them to some nocturnal raptors. The colouration is always mimetic but, having habits mainly arboricolous, they better camouflage with the trunks and the branches of the trees. They hunt more actively in respect to the goatsuckers swooping down on the preys they await and sight from their perches. They live in the south eastern regions of the world, from India to Australia (Podargus strigoides). The species belonging to this family are a dozen.

To the family Steatornithidae belongs one species only, unique also due its peculiar life habits; it’s the Oilbird (Steatornis caripensis). This lives only in the South, and in some Central America zones. Its unicity stands in the fact that it is the only vegetarian species belonging to this order; in fact it exclusively nourishes of oily fruits, mainly the palm’s ones. Another matter rendering it further unique is that of being the only bird frugivorous and nocturnal at the same time. During the day, the Oilbird lives and rests in grottoes and caverns it utilizes also for reproducing.

Finally, to the family Nyctibiidae belong 7 species of birds distributed in Central and South America and which occupy the same ecological niche, having similar habits, occupied in the other part of the world, by the Frogmouths. Also the Nyctibius, in fact, have arboricolous habits and go hunting starting from a perch. They have a conformation that stands somewhere in between the Goatsuckers and the Frogmouths; the tactile feathers (similar to hairs) of the beak are absent. Also the birds of this family have therefore carnivorous alimentary habits as they mainly nourish of insects and of some small animal and are nocturnal spending the day hours perched on branches in a cryptic manner. Unlike the Forgmouths, they do not build the nest and the unique egg spawned is laid and hatched on whatever small supporting base offered by a broken or horizontal branch.

Caprimulgiformes was last modified: May 6th, 2020 by Giuseppe Mazza