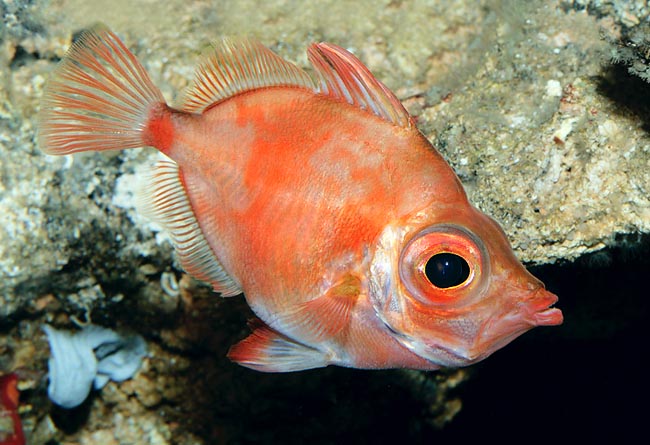 The Boarfish, “Pesce tamburo” (Drum fish) in Italian, (Capros aper Linnaeus, 1758), belongs to the class of the Actinopterygii, the ray-finned fishes, to the order of Zeiformes for some, or of Perciformes for others, and to the family of Caproidae which counts this species only.

The name of the genus comes from the Latin “capra” = goat.

The name of the species “aper” in Latin means boar. And, as a confirmation, in French the boarfish is called “Poisson sanglier”, that is, Boar fish.

It is difficult to find a minimum common denominator between these things, apart the human fantasy. By sure, the profile of the snout recalls a goat, that of the body a boar and is roundish like a drum.

It is present in all the Mediterranean, Black Sea included, even if here its density is modest. After Gibraltar Strait it goes northwards along the eastern Atlantic coast up to Scandinavia and reaches, southwards, the Senegal, colonizing the Azores, Canary, Madeira and Cape Verde Islands.

It lives along the coasts, on the corraligenous depths, but also on the gravelly and muddy bottoms, between the 40 and the 700 m of depth.

It can be 30 cm long, but rarely exceeds the 15 cm. The body is discoidal, much compressed on the sides, with tiny scales with a velvety look, but rough to the touch, just like sandpaper. Proportionally, the eye is huge, for granting good visibility in the darkness; and to support the thesis of those placing it in the Zeiformes, the fins retrace the pattern of those of the Zeus faber. 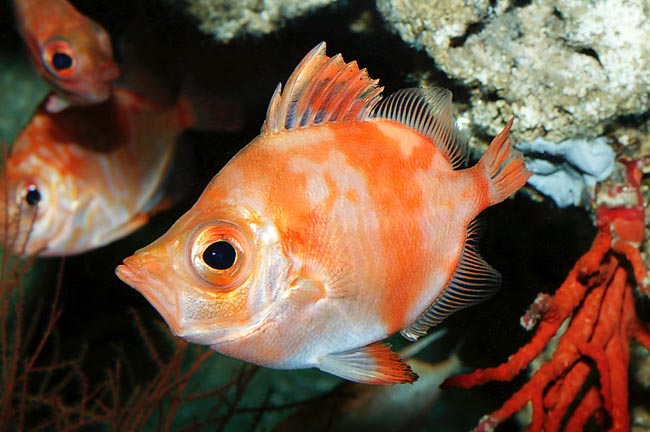 Rarely exceeds 15 cm, but recalls Zeus faber and like this one has a very protractile mouth © Giuseppe Mazza

As Zeus faber it has a very protractile mouth, covered by tiny teeth on the jaws and on the vomer.

The dominant colour is pink, darker on the back, more silvery on the sides, with bands and spots tending to the red-orange which interest also the fins.

Not less greedy than St. Pierre, the boarfish surprises the preys with the mouth which suddenly extends, like a pipe. But, seen its modest size, these are not fishes or squids, but small crustaceans, mainly copepods and planktonic forms, integrated, when it’s the case, by some small worm or mollusc.

The Capros aper lives in schools. The males are smaller than the females. In the Mediterranean, it reproduces between April and June, whilst, northwards, in the Channel, the eggs are spawned two months later and in Ireland starting from July. They are pelagic, little more than 2 mm broad and are floating.

The post-larval stages let already perceive the shape of the parents, and when about 4 cm, the juveniles are absolutely similar to the adults. The vulnerability index of this species is of 51 over 100.