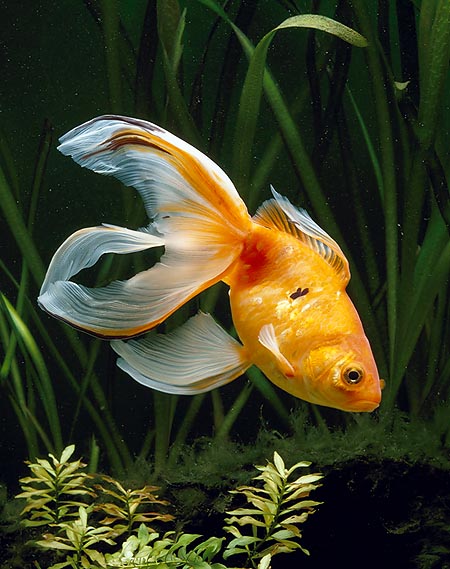 Very common in home aquaria the Golden Carassius or Red fish or Goldfish (Carassius auratus Linnaeus, 1758) is one of the many fishes afferent to the family of the Cyprinids (Cyprinidae), order of the Cypriniforms (Cypriniformes), genus (Carassius).

They stand among the most known fresh water bony fishes (Osteichthyes) in the world. The races selected by the man, for ornamental purposes, have enlivened the aquarium of everybody.

The Crucian carp (Carassius carassius), is diffused in central Europe and in the temperate Asia, in the wild; it is present, even if extremely rare, also in Italy, where, since long time, only three natural locations where it can be found, are known: near Modena, Bologna and Palermo.

It is a species with a brownish yellow body. The Goldfish (Carassius auratus), subject of this text, is much better known than the Crucian carp (Carassius carassius). In reality, this species has, as centre of origin, the freshwaters of central-eastern Asia.

The Carassius auratus, like other species of the genus Carassius, loves the still waters, often little clean and poor of oxygen, where it feeds of the animals present in the pebbly and muddy bottom and of weeds.

Thanks to these habits, the Carassius auratus and its congeners, stand among the easiest fished to breed in aquariology (an excellent beginning for the neophytes), because they do not require particular environment conditions and are content of various foods. When in captivity, they may reach even the 30 years of life!

The Carassius auratus and the other congeners of the Carassius, are fishes strictly similar to the carps, with which they may be crossed (often the aquaculture biologists, in order to produce races to commercialize, effect these crossings in the nurseries) due to the characteristics of the scales, the shape of the body and the habits, but they may however well distinguish from the carps, for the absence of the barbells and the minor dimensions. Even easier, if their separation from other species of Cyprinids (Cyprinidae); among the Italian, the tenches and the barbels have much evident barbs, whilst the chubs and bleaks have a much more slender silhouette than the Carassius. 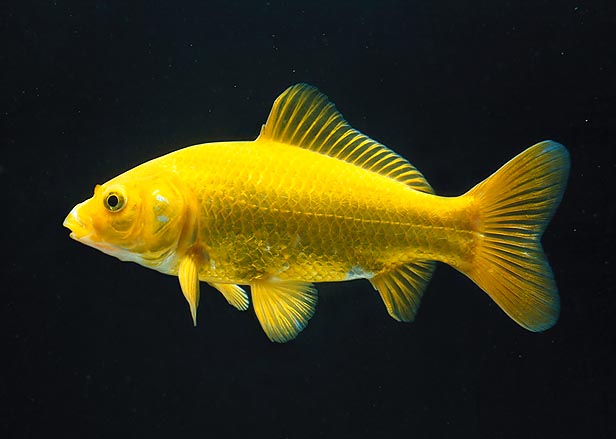 A more rustic form. The kinship with carps is evident © Giuseppe Mazza

In the wild, the Carassius auratus and the Carassius carassius, have brown, greenish-brown liveries, with a rather high dorsal fin and the remaining fins with a normal development; the tail is “diphycercal”, that is bipartite, with amply rounded tips.

The maximum reported length is of 30 cm.

The very gracious red and golden specimens that all know, have been gotten, only through the artificial selection.

In the simplest to obtain varieties, they modify only the colour of the fish, which presents as follows: golden, orange, red and uncoloured whitish, or spotted by these colours, in varying proportions and dispositions.

These very economical fishes are often used for embellishing pools and fountains.

More sought after and expensive are, on the contrary, the varieties where, besides the colours, are modified also one or more morphologic characters; in reality, it’s matter of poor beings, malformed and monstrous, to which the absurd malformations caused by the human selection may create incidents of various kinds.

The ocular bulbs may also evert so much to give the poor little fish a grotesque appearance; these are the famous orandas. 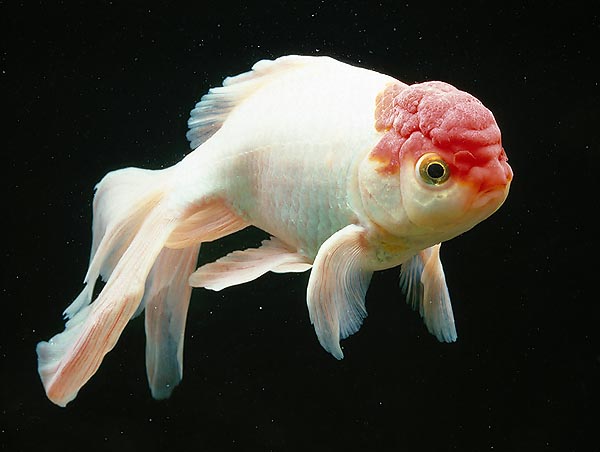 Among all these monstrosities, that which damages more the animal getting it is the hypertrophy of the tail and the fins, which hinder a satisfying swimming; specimens of this type, if bred with normal fishes, risk of dying due to their slowness in getting the food.

The females of Carassius auratus and the other congeners of Carassius, lay a great quantity of eggs, covered by a gelatinous film, which allows their adherence to the aquatic plants, after which they will be fecundated by the male. The adults do not show any king of parental cares.

The vulnerability index of this species is of 24 over 100.