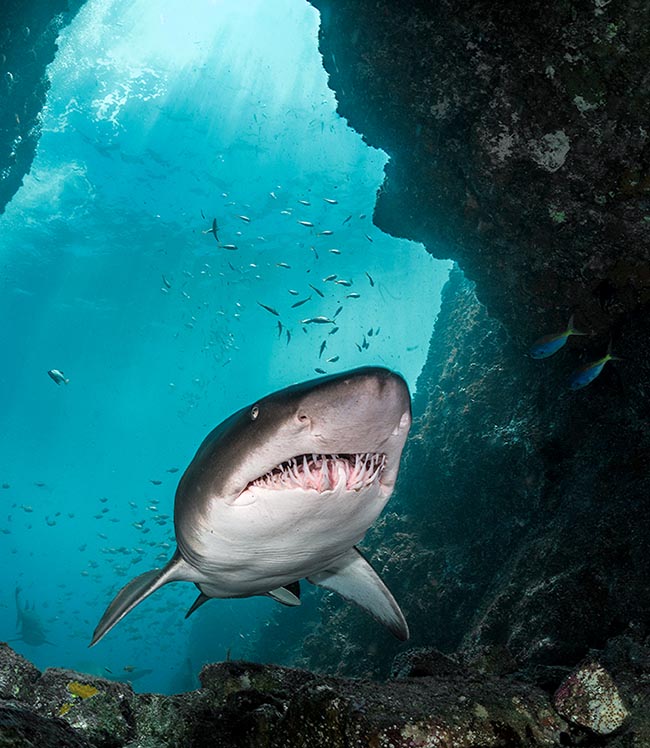 Not all aggressive-looking sharks are dangerous to man. Conversely, it’s the man who is dangerous for the sharks, so much so that about one quarter of these fishes are under risk of extinction.

This is the case of the Sand tiger shark or Grey nurse shark (Carcharias taurus Rafinesque, 1810) that presently appears in the Red List of the species under risk as “Critically Endangered”).

With its sharp and protruding teeth, greatly displayed even when the mouth is closed, it is terrifying, but has a mild temper and attacks man only if feeling threatened or for stealing the bleeding prey of the divers.

It can cause injuries, but its mouth is not big enough to cause fatal accidents.

It belongs to the class of the Chondrichthyes, the cartilaginous fishes, and to the order of the Lamniformes, the same of the far more frightening Great white shark (Carcharodon carcharias), at the top among the predators in the world of the fishes, and to the family of the Carchariidae, born during the Late Cretaceous and represented presently only by this genus with two species.

Carcharias originates from the old Greek “καρχαρίας” (karcharías) meaning shark, whilst the species taurus, bull in Latin, refers to the squat and massive fore part of the body.

Like Sphyrna lewini, the Sand tiger shark is practically cosmopolitan with a preference for the temperate warm waters between 12,5 and 28 °C.

It is present along the coasts in all oceans, but the eastern Pacific.

It can be found in the Mediterranean, the Gulf of Aden and the African coast, Madagascar included, up to South Africa and Namibia. Then, in the Indopacific, we find it, after India, in the Andaman Islands, Indonesia, Australia, Philippines, Vietnam, Taiwan, China, Korea and Japan with an eastern limit at the Fiji Islands. 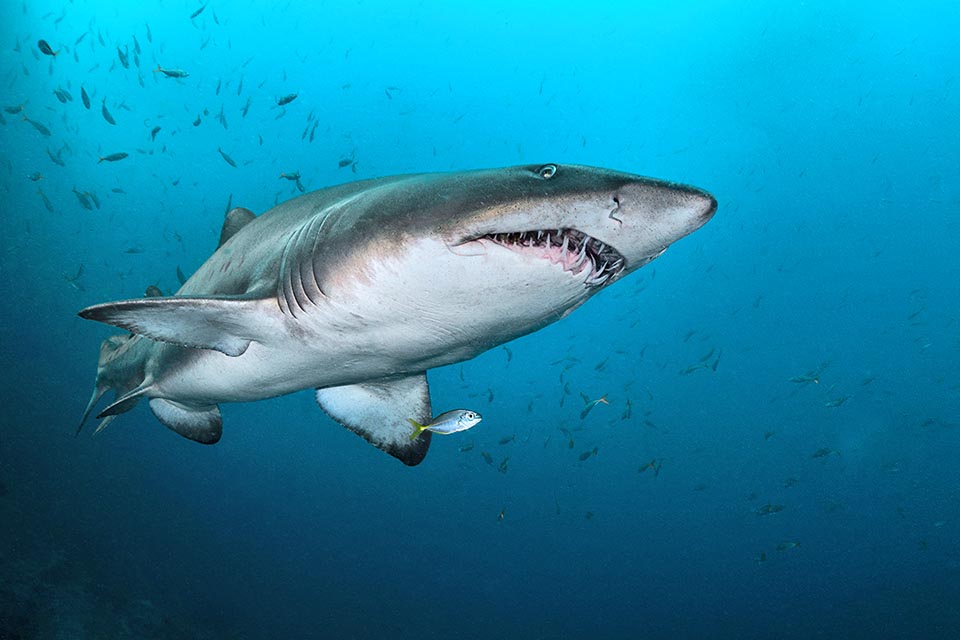 Despite the menacing look, it attacks man only if it is provoked or attracted by the bleeding fishes of divers, but usually does not cause fatal accidents © Rafi Amar

In western Atlantic it is present along the USA and Canada coasts, the Bermudas, in the Caribbean and then, in the austral hemisphere, in Brazil, Uruguay and Argentina.

On the other side of the Atlantic, starting from the Mediterranean, we find it in France, Spain, Morocco, Mauritania, Macaronesia and Senegal, up to Cameroon and São Tomé and Príncipe.

The Sand tiger shark goes swimming in relatively shallow waters, between 1 and 20 m of depth, with a sighting reported at 191 m. 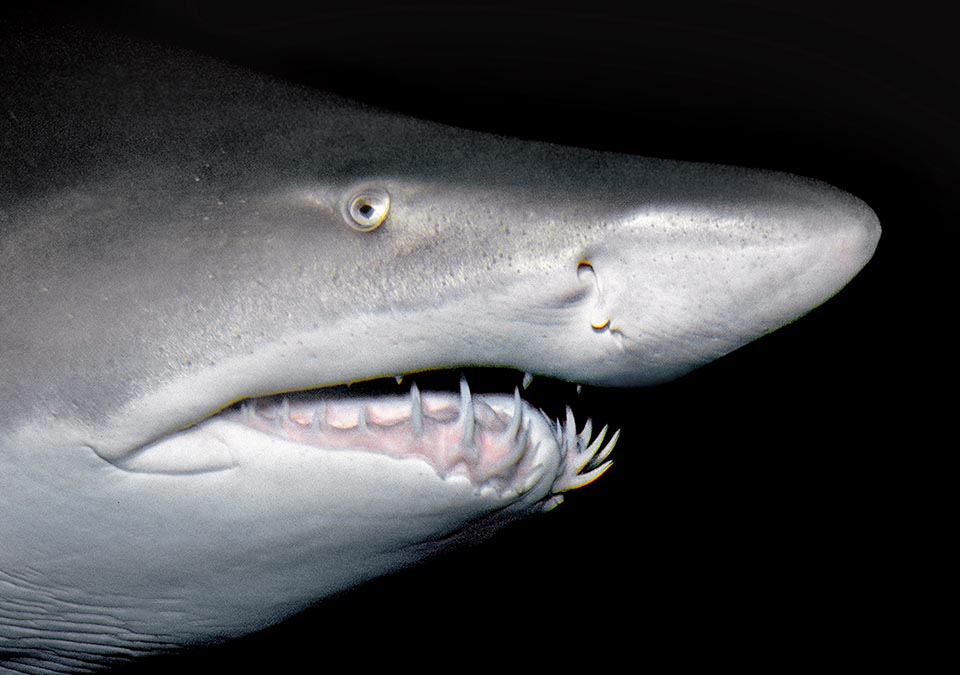 The eye is small and has no nictitating membrane. Nostrils are closer to mouth than to snout, where we note like many small pores the Ampules of Lorenzini, very sensitive sensors with which localizes in the dark of night the magnetic field emitted by preys and orients, with GPS precision, basing on the Earth’s magnetic field © Giuseppe Mazza

Present in rocky, madreporic environments and along the sandy coasts, it rests mostly during the day in submerged grottoes, staying quietly in mid-water. Even if, like all sharks, it does not have the swim bladder, it may in fact swallow the air and store it in the stomach for a neutral buoyancy.

In various locations it performs annual migrations covering even thousands of kilometres. Along the Australian coasts and South African coasts, for instance, gives birth at the extreme South in cool waters, but for mating it goes up along the coast for more than 1000 km in warmer waters and for the pregnancy movers even more to the North, towards a tropical climate until when the time comes to get back to the starting point to deliver other sons. 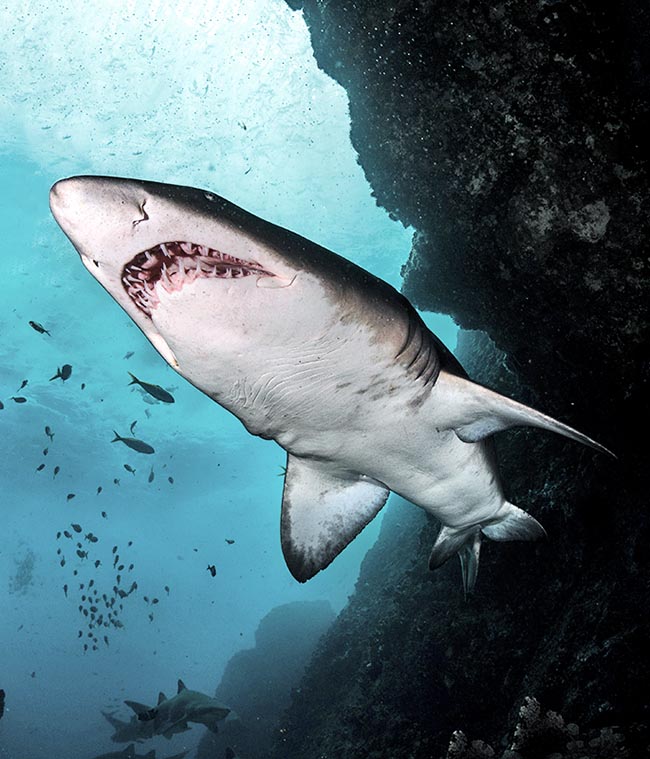 The very impressive mouth, seen from below, forms an acute arc, with rows of sharp and protruding teeth, like daggers, presenting two unusual sharp points at the base. 45-55 on the upper jaw and 40-46 below © Rafi Amar

The body, covered with spaced small scales, presents brownish grey on the dorsal side with irregular dark brown reddish spots on the sides, more evident in the juveniles.

As usual, the ventral part is whitish.

The body is dorso-ventrally flattened with pointed snout and with an eye small if compared to the body without the protection of a nictitating membrane.

Aligned with this, not far away, stands a barely visible, very small spiracle.

The nostrils are closer to the mouth than to the apex of the snout.

Are not missing, visible like many small pores, the Ampules of Lorenzini to localize the magnetic field emitted by the preys and for orienting through the Earth’s magnetic field.

The impressive maw that, seen from below, forms a sharp arc, has sharp teeth similar to daggers with two unusual sharp points at the base.

They are arranged on more rows with the first two protruding, the third bent backwards and the other ones, in reserve, still growing in the gum tissue.

The upper jaw has at the centre some very small teeth that give the impression of a void and those close are less inclined outward for holding the prey. 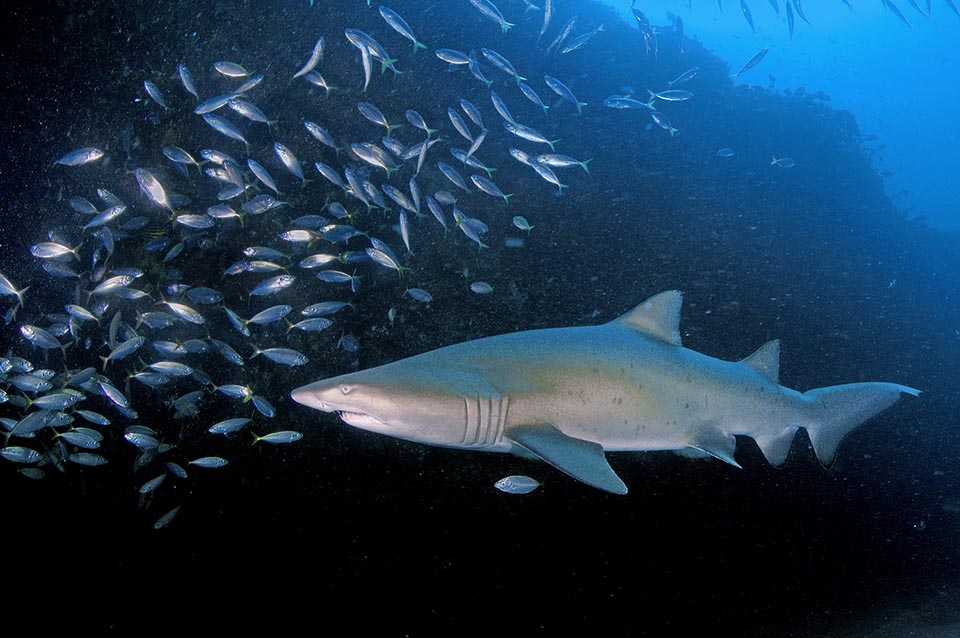 The top common size is of 2,5 m and 100 kg, but males may reach 2,8 m, the females 3,3 m. The maximum ascertained weight is of 158,8 kg. The sharks do not have swim bladder and if they don’t move they sink, but this swallows air and can stand motionless in mid-water with a neutral buoyancy to rest or to stand in ambush © Klaus Stiefel

The heterocercal caudal fin is long and sturdy, with the lower lobe inconspicuous and the upper one presenting a pronounced subterminal notch.

Carcharias taurus goes hunting during the night, alone or in. school if the prey are big and fierce, like, for instance, the Great barracuda (Sphyraena barracuda). 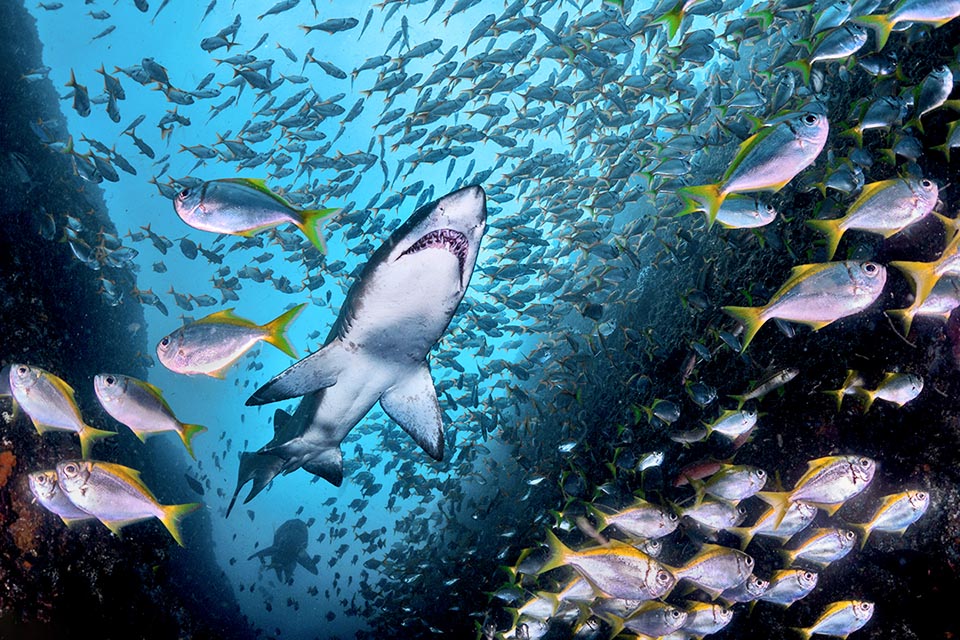 It hunts by night, alone or in groups if the preys are big. It eats for the 60% bony fishes, but it also attacks rays, small sharks, squids, lobsters and crabs © Rafi Amar

60% of them are demersal bony fishes, that is swimming over the bottom, that often surprises standing still, without making a sound, thanks to its neutral buoyancy, but attacks also rays and small sharks, squids, lobsters and crabs.

The males of the Sand tiger shark reach the sexual maturity by around the 5-7 years when they measure about 1,9 m, the females later, when 7-10 years old and 2,2 m long.

The mating has been observed in an aquarium where an alpha male has pushed rivals away and courted for several days a female initially biting and defensive. 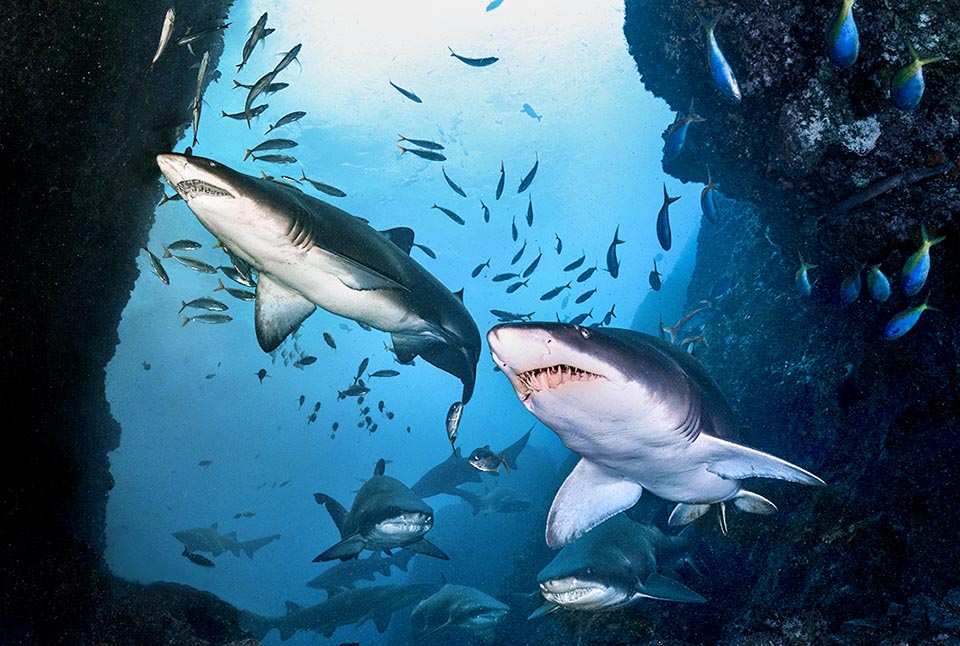 Male’s courting lasts several days. When it is accepted, it seizes the pectoral fin of the female and fecundates her © Rafi Amar

The coupling has occurred as usual with the male clenching between its teeth the pectoral of the partner while introducing in the cloaca one of its two pterygopodia with the sperm.

The Sand tiger shark is a particular ovoviviparous species, characterized by the intrauterine cannibalism of the embryos.

The female has two uteri that initially can contain even 25 fecundated eggs each. In both, after having consumed their yolk sac, around 10 cm, the embryos grow up devouring the other embryos. So, at the end, only one remains per uterus and the female, after 8-9 months of pregnancy therefore gives birth only to two sons about 1 m long. 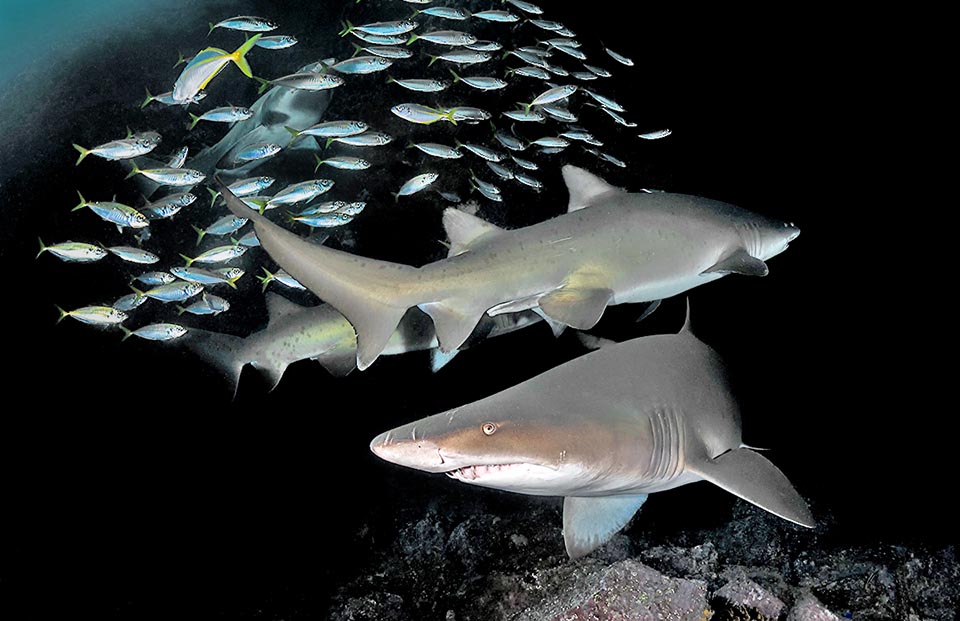 The females have two uteri with even 25 eggs each. In both the strongest embryo while growing eats the brothers and so the mother delivers only 2 pups © Rafi Amar

On the one hand they get out already weaned, with good chances of getting away with it, but the females must recover from the effort, 2-3 years are needed for a new delivery and the average rate of reproduction is therefore less than one pup per year.

Therefore, the resilience is very low, with a minimum doubling time of the populations of 14 years to which we have to add a high vulnerability linked to the fishing that marks 58 already on a scale of 100.

Underwater fishing, line fishing, random catches with trawl nets or targetted, like, for instance, in Japan where the flesh of this shark is particularly appreciated. 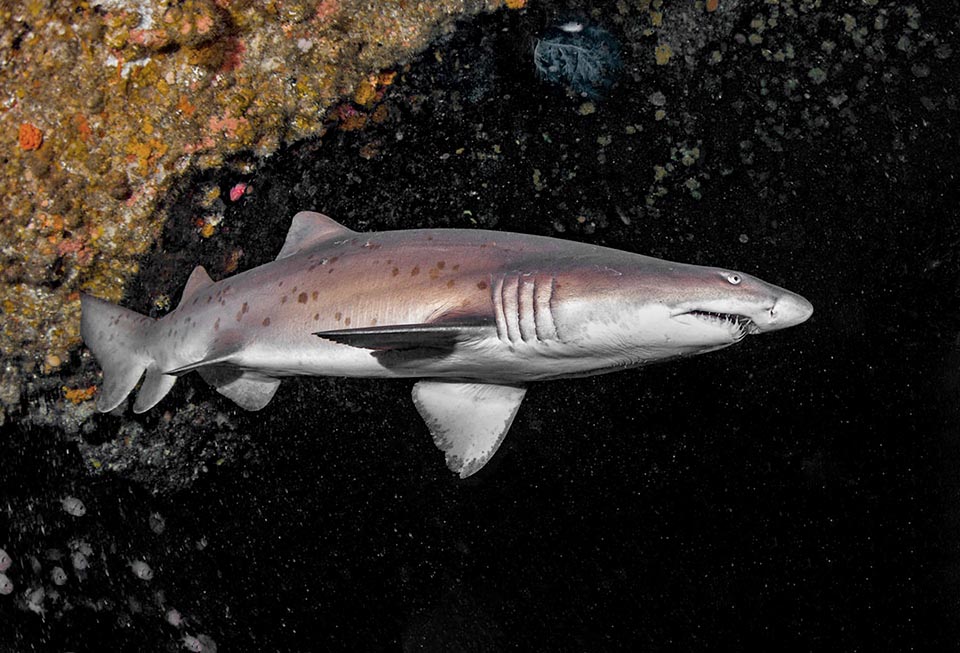 Upon birth they measure about 1 m. This is a young with the typical spots on the sides, often attenuated also in the adults © Raimundo Fernandez

Presently, in 2022, off the coast of Florida the species has already disappeared and is in marked. decline in all locations.