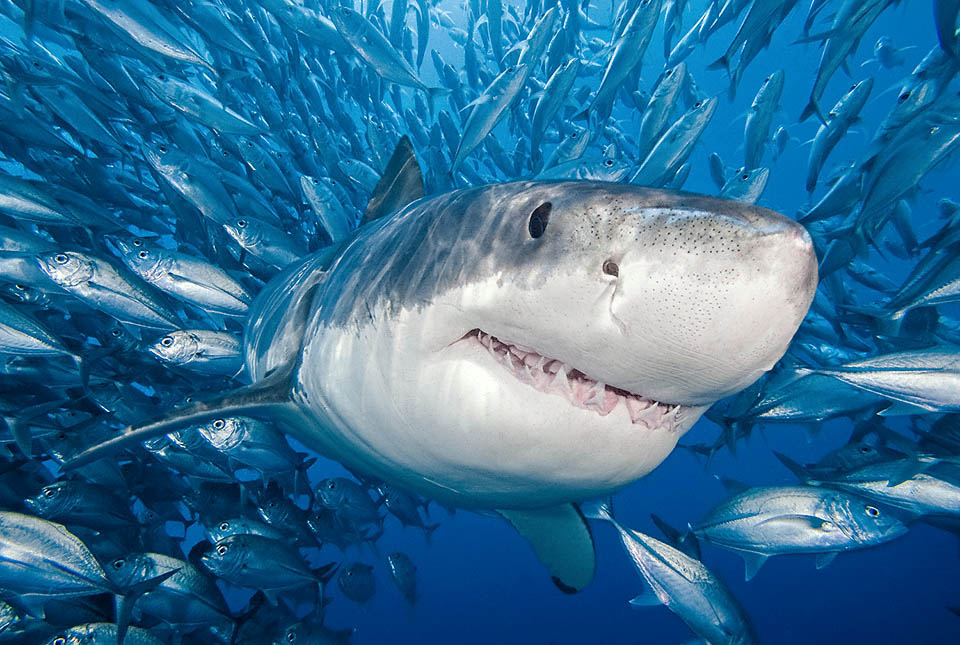 Present in almost all seas, Carcharodon carcharias is the biggest extant predator fish. On the snout are visible, like pores, the Loenzini’s ampullae that locate the electrical field emitted by the prey. The big nostril perceives at great distances even infinitesimal blood traces. The eyesight is excellent with a good perception of the colours © www.davidfleetham.com

Known as Great white shark, White shark or simply as Great white, Carcharodon carcharias (Linnaeus, 1758) is the biggest is the largest predator in the fish world, with a proven record of 6,4 m and 3175 kg, and the third fish by size, after the Whale shark (Rhincodon typus) and the Basking shark (Cetorhinus maximus).

It belongs to the class of the Chondrichthyes, the cartilaginous fishes, to the order of the Lamniformes and to the family of the Lamnidae that counts only 3 genera and 5 species with tapered body and pointed snout with 5 gill slits per side that reach the pectoral fin. Frightening teeth, similar to daggers and eyes without nictitating membrane.

It already circulated in the Miocene and there are fossil remains that highlight, after the size of the teeth, a huge 17 m Carcharodon megalodon now assigned to the Otodontidae, an extinct close family.

The name of the genus Carcharodon originates formed by the old Greek “κάρχαρος” (kárcharos), meaning sharp, pointed, and “ὀδούς” (odóus), tooth, whilst the specific term carcharias from the Greek “καρχαρίας” (karcharías) that simply means shark. It is therefore a shark with pointed teeth. 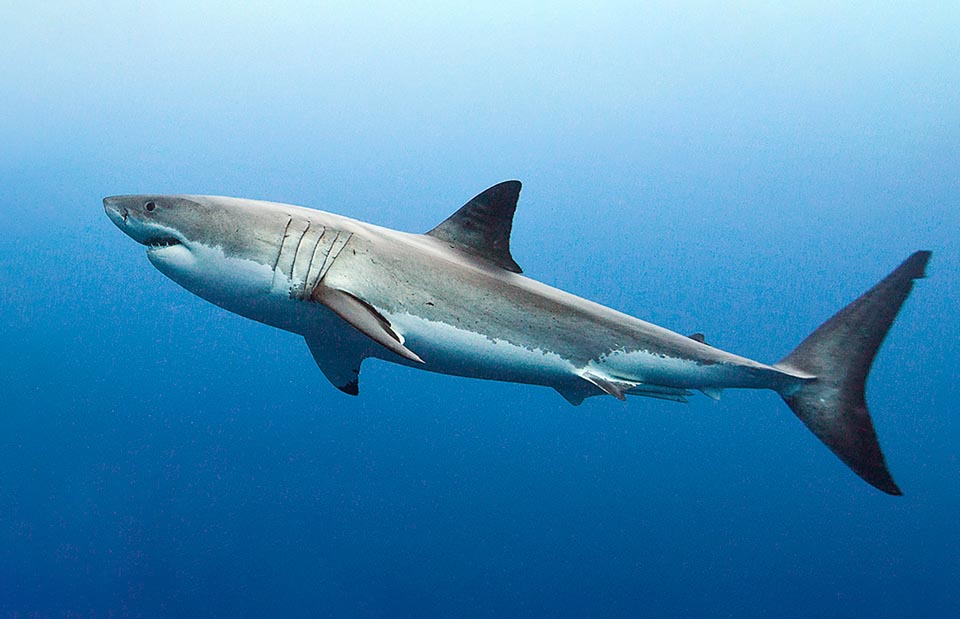 Even 6 m long with 3 t of weight, has a huge caudal fin that allows the 25 km/h and incredible ascents from seabeds at 40 km/h to seize prey from below © Elena Regina

Carcharodon carcharias lives in waters with temperatures included between 11 and 24 °C and is therefore present in all seas excepting the Arctic and Antarctica cold zones. Uncommon in the tropics, it conversely goes swimming in the Mediterranean, where it reproduces between Tunisia, Sicily and Malta, but without going too far east seen have never occurred sightings along the Israeli coasts and in the Black Sea. It seems that it entered by chance through Gibraltar thousands of years ago, coming, who knows how, from Australia. Recent molecular studies have in fact proven that the Mediterranean white sharks have a genetic heritage more like the Australians than the Atlantic ones.

It is very frequent along the coasts of California and of Mexico, southern Australia, New Zealand, and mostly of South Africa, where in Seal Island are organized travels for tourists who wish to see them while diving, protected by solid cages in zones where they are regularly nourished, or by boat when they effect unbelievable jumps out of the water, deceived by the silhouettes of fake sea lions who in that zones are their usual preys. 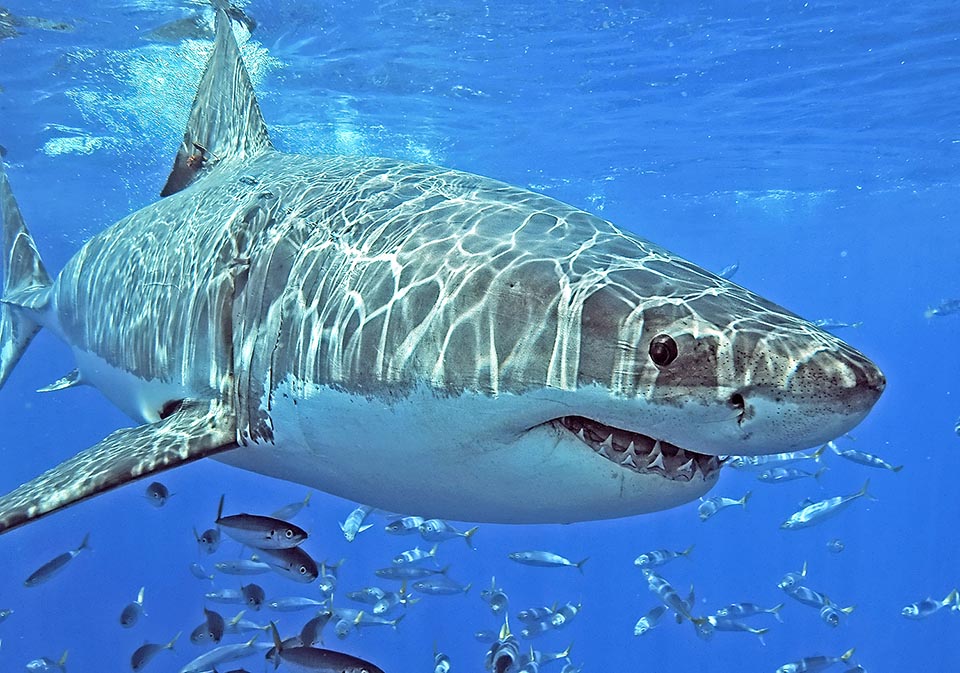 Here the waves throw a mimetic net on the dark back that seen from above seems a seabed, whilst the white belly, seen from below, confuses with the sea brightness © Terry Goss

Coastal and pelagic, the Great white shark goes swimming usually solitary between 0-250 m of depth. It can go down up to 1200 m, but it mainly moves on the surface, making migrations of thousands of kilometres, and can jump out of the water, like the whales, to locate on sight and with their exceptional sense of smell, the presence of terrestrial prey. It does not love too much the brackish waters whilst it does not disdain those, often polluted, of the ports, probably looking for waste. It seems to be increasing in north-eastern Pacific and in the Indian Ocean whilst, compared to the past, is in sharp decline in the southern Pacific and especially in north-western Atlantic.

The snout, conical and pointed, displays nostrils closer to the mouth than to the apex. This opens downwards and has on the lower jaw several sharp teeth for holding the prey whilst the upper ones, triangular and laterally serrated, are used for cutting it in pieces. 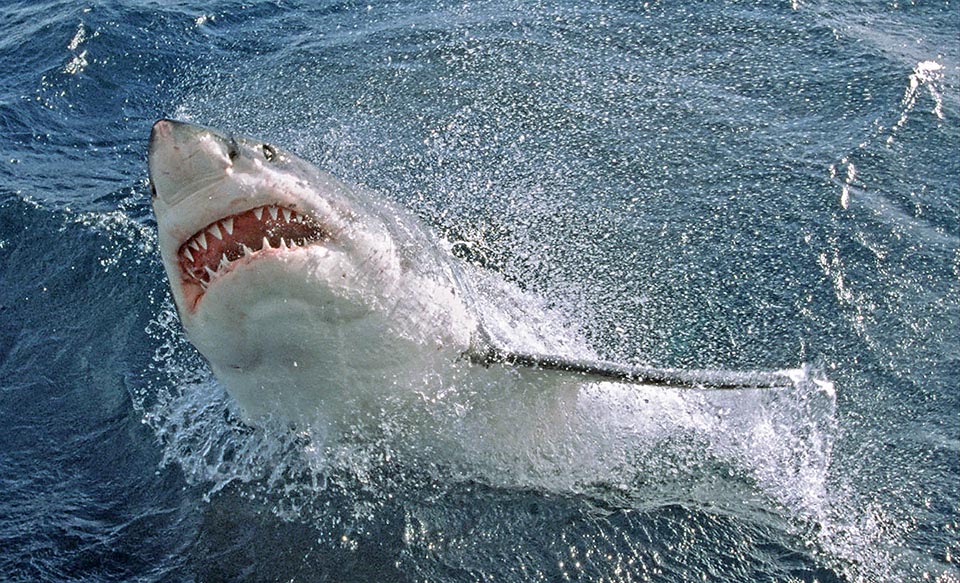 Here has lost a tooth, but then they grow back. The lower ones hold the prey and the upper ones, serrated, tear it in pieces © Nick Sidle

The Ampullae of Lorenzini, visible like pores on the snout, perceive the electric fields emitted by the preys they perfectly locate even in the darkness, helped also by a lateral line very sensitive to the water vibrations. The sense of smell is excellent, able to feel from far away even infinitesimal traces of blood. Therefore, Carcharodon carcharias could very well go hunting in the dark but prefers to go looking for its prey by day for the sight enjoyment that, moreover, has an excellent perception of colours. However, the eyes are vulnerable because there is no protective nictitating membrane and to avoid disabling wounds, during the attacks, the Great white shark prefers to rotate them backwards into the eye sockets.

The propulsion is entrusted to the huge crescent-shaped tail fin, preceded by a dorsally-ventrally flattened peduncle expanding like a keel on the sides. 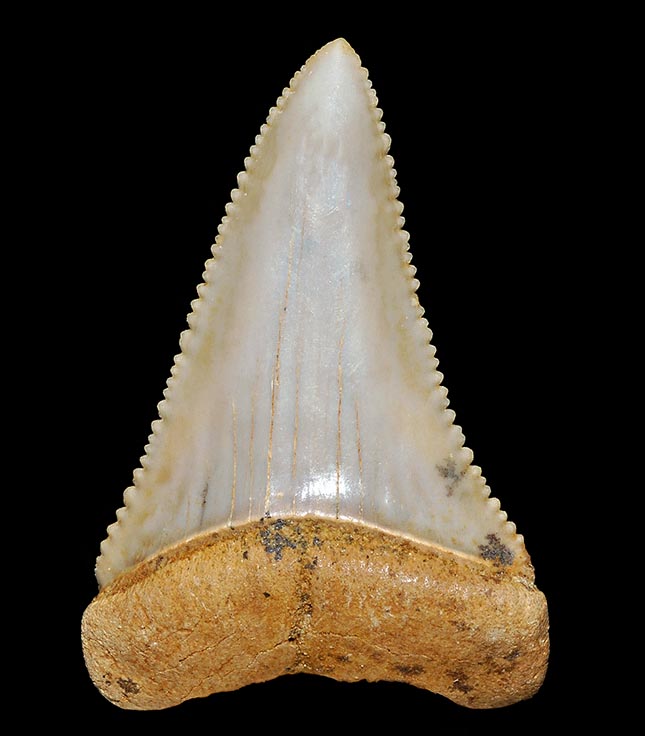 The triangular teeth of the upper jaw reach the 7,5 cm and are nowadays the biggest in the world of the sharks © Géry Parent

It is a motor that cannot ever stop, because unlike the other sharks that may rest on seabed, like the Lemon shark (Negaprion brevirostris), the Great white shark must be constantly moving to oxygenate its gills. A motor that allows it to reach the 25 km/h and unbelievable ascents at 40 km/h, facilitated by absence of the swim bladder for seizing the prey from below.

The skin is protected by tiny keely scales with three tips, covered with enamel to reduce the friction with the water. They are so small that the skin seems almost smooth when touched.

The upper part of the body is dark, with shades ranging from lead grey to brown and black, and the lower one white,

to escape the fight of prey both from above, where the enormous mass is taken as a bottom, and from below because the animal is confused with the brightness of the sea.

Carcharodon carcharias is a very intelligent fish as it does not choose its prey at random.

Its diet is selective depending on the locations: in the Mediterranean it looks for tuna, dolphins, sea turtles, swordfishes and other sharks, but in South Africa and In Australia, for instance, its choice dish consists of fur seals and sea lions. It also eats, of course when it happens, any bony fish of suitable size, rays, squids and octopi.

The small catches are ingested whole and for the big ones it uses the “hit-and-run technique” waiting in the surrounding area, without running any risks, for the preys to bleed to death after the first bite.

Then they are real scavengers of the seas: they follow the ships throwing overboard their waste and do not disdain the carrions of big dead animals such as the whales.

Their only natural foe is the Killer whale (Orcinus orca), significantly larger, that often goes predating in schools.

Also the Great white shark has a social life. Even if it hunts alone, in fact, is found sometimes competing with its consimilar in the sites where the prey abounds. In this way get form alimentary aggregations with a hierarchy based on the size and the priority to the occupants of the place. The disputes are mostly settled with predatory movements, showing teeth, arching the back or slamming the water with the tail displays of strength that discourage the rivals and lead to the formation of clans consisting of about ten individuals.

The sexual maturity is reached around the 3,8 m of length in the males and the 4,5-5 m in the females. 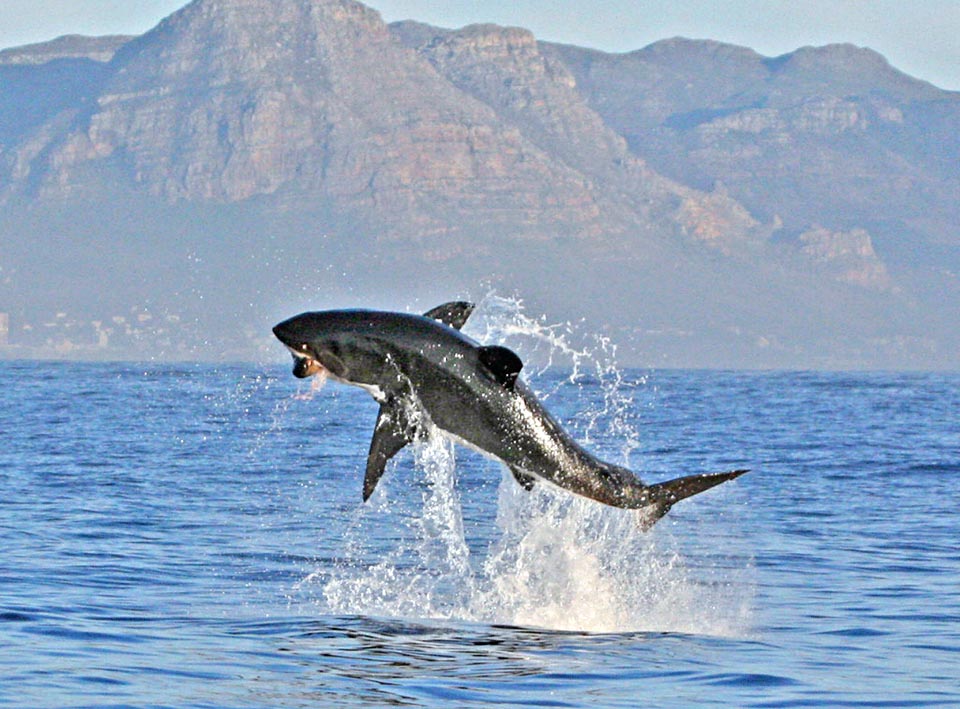 Great white shark with a Cape fur seal in the mouth, surprised while swimming. Its ascent from the seabed has been so rapid to send them out of the water © Graham Ekins

Not much is known about the mating, but by evaluating the traces of the bite on the females’ pectoral fins it is thought that they occur, with a hookup like that of Negaprion brevirostris, in synchronized parallel swimming while the male introduces a pterygopode into the female cloaca. But whilst the females of the Lemon shark are placental viviparous, those of the Great white shark are ovoviviparous: that is, the pups are born in the womb from the fecundated eggs and when the embryos have exhausted the reserves of the yolk sac they don’t grow at the mother’s expense but devouring the other not fecundated eggs. It is thought that the gestation lasts about one year. The litter is usually formed by 7-14 pups that upon birth are already 120-150 cm long and weigh even 30 kg with a lifespan of more than 70 years.

The Great white shark is a fish dangerous for the swimmers and the surfers as they are at times mistaken for seals, but the risk is minimal. The statistics affirm that between 1876 and 2010 all over the world only 244 unprovoked attacks have occurred with just 65 deaths.

Conversely, nowadays, it is rather the shark who must be afraid of man. Even if the flesh is not that great, and the marine pollution that may accumulate poisonous substances over time, it is fished for feeding, the leather that is gotten from its skin, the oil extracted from the liver and the fishmeal. The teeth are sold to the tourists and the jaws end up in the museums. 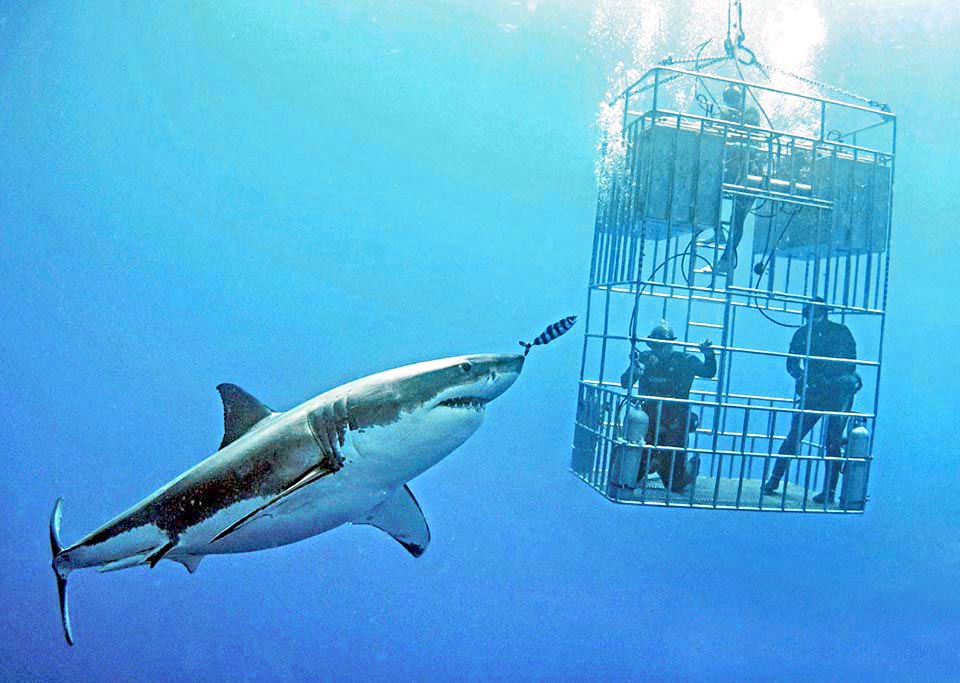 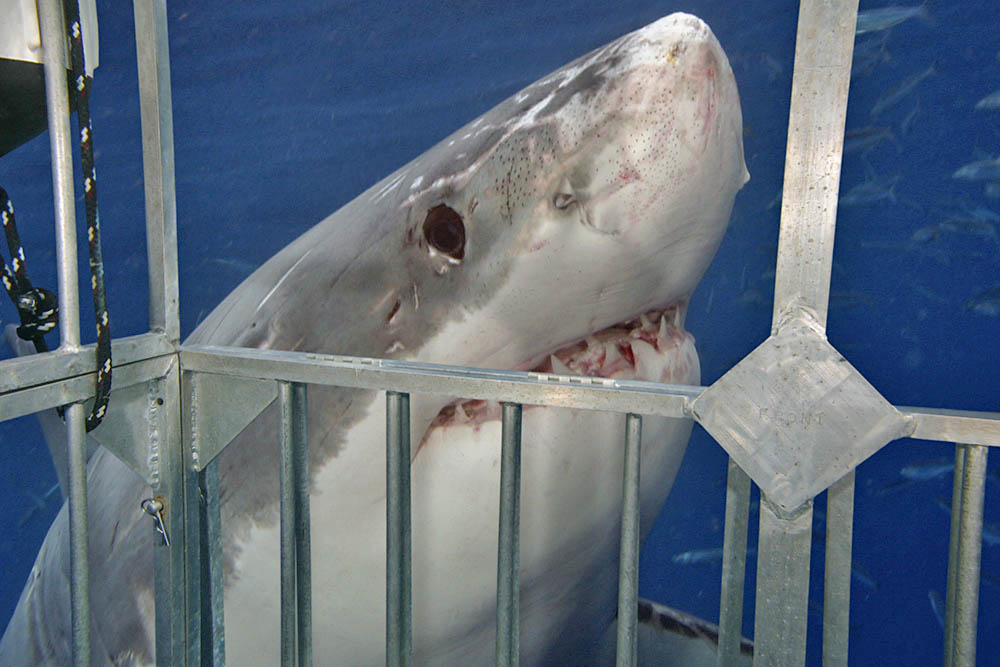 To photograph safely a Carcharodon carcharias is obviously necessary the protection of a cage. Here we are at Guadalupe Island, Mexico, but similar initiatives were born in Australia and in South Africa where it is artfully fed, regularly, for the cage tourists. On the one hand this raises awareness and consequently the protection of the species, but on the other hand it may associate in the head of the shark the presence of man to the food, and this could trigger dangerous attacks wherever there is no cage © www.davidfleetham.com

The attempt to set them in the large oceanic basins has been unsuccessful. The Monterey Bay Aquarium in California has been able to keep one specimen alive for 198 days and then, like other four specimens, was obliged to set it free at sea. When captive, in fact, the Carcharodon carcharias often does not eat, butts against the glasses of the pool and injures the other sharks.

Presently, in 2022, the Great white shark has a very low resilience as are needed more than 14 years for doubling the populations decimated by the events, and the vulnerability index to fishing marks 86 on a scale of 100. The November 2018 IUCN evaluation and the insertion as “vulnerable” in the Red List, appears quite optimistic, as these fishes cover enormous distances, and it is possible that some animals have been counted more than once. In a recent study, the Stanford University in fact evaluates the consistency of the species as just 3500 individuals.