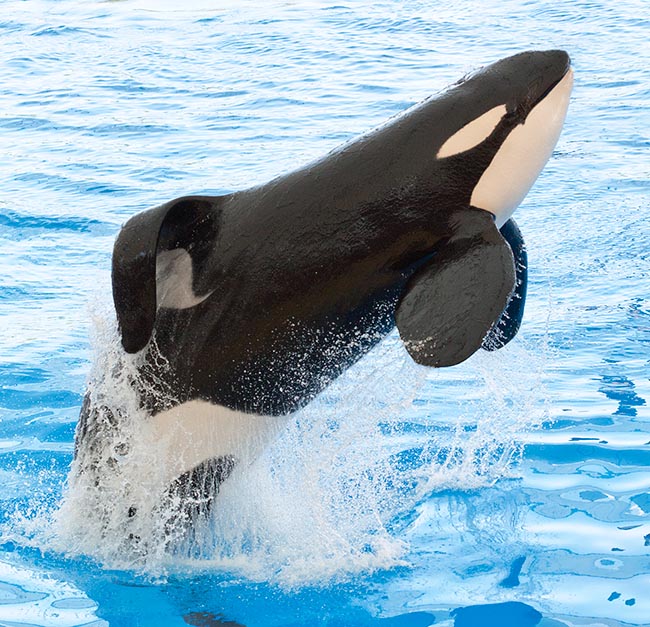 The Orca or Killer whale (Orcinus orca Linnaeus, 1758), is the biggest and the most ferocious amongst the Delphinids (Delphinidae).

It is an aquatic eutherian-placental mammal, afferent to the order of the Cetaceans (Cetacea), suborder Odontocetes (Odontoceta), family of the Delphinids (Delphinidae) and genus Orca (Orcinus).

The scientific name of the genus and of the species come from the Latin “orca” = cruse, barrel, jar, due to the shape of the body.

As we said, the orca is the biggest delphinid, as well as the most ferocious and dangerous, also for the man, who at times is victim of its attacks. It is a redoubtable predator, present in all the seas.

In its description, the Swedish biologist Linnaeus called this splendid species Delphinus orca. The genus Orcinus was introduced by the taxonomist biologist Fitzinger in 1860. The zoologist biologists Van Beneden and Gervais, in 1880, did use the denomination of Orca gladiator.  With successive systematic revisions, the orca was ascribed to the genus Grampus, proposing the name of Grampus rectipinna for the specimens having the dorsal fin more developed, but nowadays the marine biologists and the taxonomists indicate one only species, the Orcinus orca, perhaps subdivided in different subspecies.

The social behaviour of the orcas has been studied much more than what has been done with other species of delphinids; for instance, the biologists of Nanaimo Biology Station and of the University of British Columbia have done for almost 40 years studies on the social organization of the orcas present along the coasts of western Canada as well as those of California up to the Chilean ones. 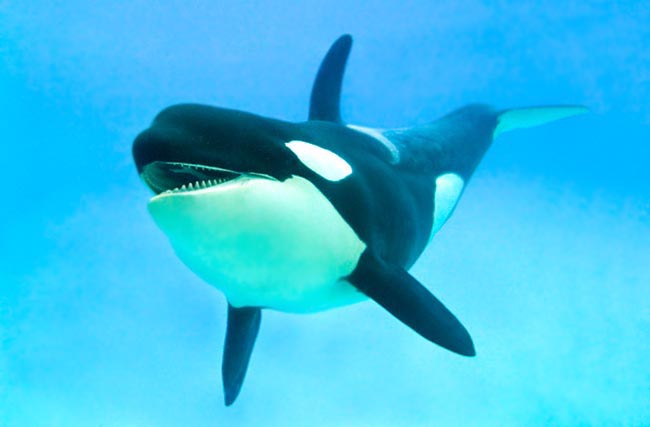 It reaches the depth of 1.000 m and the apnoea lasts even 20 minutes © Giuseppe Mazza

These studies of ethologic and ecologic nature, have brought to light a particular behavioural module, defined by the Anglo-Saxons as “Spy hopping”, this particular cetacean seems to share with the Short-finned pilot whale (Globicephala macrorhynchus) and the Risso’s dolphin (Grampus griseus) and which consists in a slow and silent emersion of the animal, just with the head, in explorative phase.

Historically, the orca belongs, unluckily, to the long list animals hunted (in the specific, the cetaceans) by the human being. The International Union for Control of Nature (IUCN) is still investigating, by means of a census, about the real numerical status of this mammal and the data are not yet available.

The great Canadian biologist Dr. Michael Bigg, deceased in 1990, who studied for 40 years the orcas in the Boreal Hemisphere by means of the technique of the photo-identification he had invented during the seventies of the last century, shows the existence of 10 different morphotypes, differing for the length and the shape of the dorsal fin, as well as for the general size, to which should correspond just as many geographic ecotypes; the International Commission for Zoological Nomenclature (ICZN) still now, though recognizing the enormous value of Dr. Bigg’s work, has not classified them as  subtypes, waiting for other data.

Cosmopolitan species, diffused in all the oceans and seas.

It has coastal as well as pelagic and bathypelagic habits, depending on the geographic areas of distribution.

In a way, these animals resemble, from the social point of view, the lions: in fact it is possible to find isolated individuals or two adult or sub-adult males which live roaming, nourishing of fishes (salmons) but also of baby sea lions (with skilful technique getting up to the ice pack of the beach where they are), of seals, of adult otaries in open seas and of cetaceans such as dolphins, mereswines, belugas, etc.

Though rare, also attacks to the walruses are reported. The struggle, in these instances, is titanic. When they live aggregate, we have small communities formed, as is the case of the lions, by stable groups, with even 50 specimens of all ages and of both sexes. The leader is a mature male, easily recognizable due to the huge triangular fin on the back, whilst the females do have fins with sickle-shaped morphology.

This character of permanent dimorphism allows the distinction between the sexes with the simple observation, for instance by means of a binocular and to utilize the technique of the photo-identification, very much useful when long studies lasting for years are done on determined groups. Each group is formed by more families, where the unity of base is an adult female with progeny. 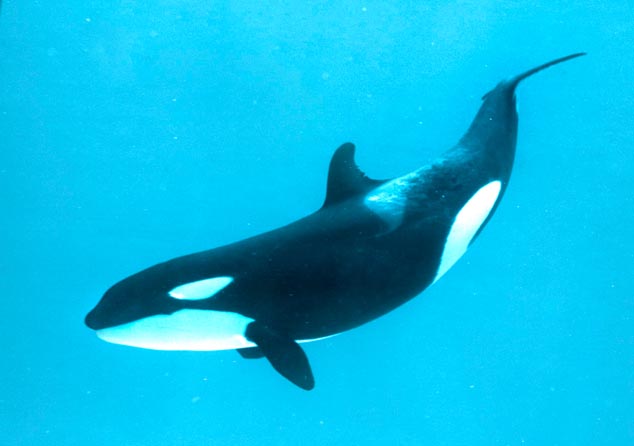 When the young are females, the stay with the mother also after the birth and leave it only when its death occurs, in order to form other unities of base. When they are males, even if they keep inside the group, they do not belong, on the contrary, to any family.

In both sexes, the orcas can reach the 1.000 m of depth and the apnoea can last even 20 minutes.

Like the other delphinids and the cetaceans, they present an echolocation mechanism with which they sound the bottom and the surrounding area by emitting noises organized in a linguistic code which, perhaps, divides in dialects (for the associated mechanisms please refer to the text of the Tursiops truncatus ). On October 12th, 1958, they sighted an about 6 m long male moving at the remarkable speed of 55 km/h. The biologists noted that a similar speed, besides the bottlenose dolphin, could be achieved by the Dall’s porpoise (Phocoenoides dalli). In the aquarium of Vancouver, Canada, where the studies on the orca are much developed, since many years, precisely since 1988, on the frequency 88.5 FM transmits a radio station called Orca broadcasting the sounds of the voices of these extraordinary cetaceans. 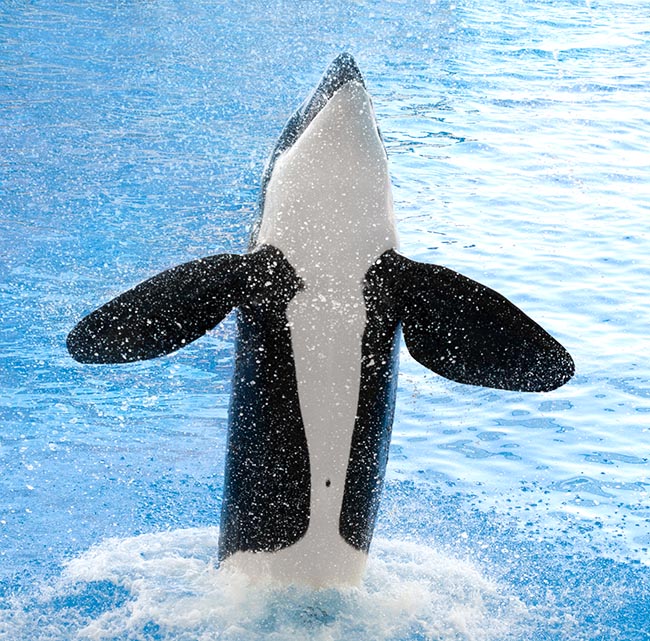 As previously said, the orcas are ferocious predators. Among the fishes, besides the salmons, they eat also the halibuts, enormous arctic soles, and the herrings.

During a research campaign, the biologists have studied the gastric contents of a group of orcas, finding the residuals of even 4 species of pinnipeds, 24 of cetaceans, one dugong, 30 species of fishes, 7 of sea birds and 2 of cephalopods, besides an ample variety of warm and cold-blooded animals, such as the marine turtles.

During the winter, it is not rare that the orcas nourish of seals, otaries and various cetaceans and of one of their choice preys, the common minke whale.

Between the orca and its prey exist complex ethologic relations, because often the biologists and the fishermen have seen this surly predator while swimming in the middle of schools of preys without creating the least alarm.

In summer, the main prey is formed by the fishes (salmons for instance), for such reason they often cross the migratory routes of these fishes which are seized in the moments of low tide.

If the individuals are numerous, they collaborate by surrounding the school of salmons and at times the oldest and most expert animals emerge with the salmon in their mouth and instead of eating it they give t to the young, who are not yet skilled hunters.

The groups of transients are able to cover great distances in short times. They form groups with various compositions, little stable, and hunt mainly pinnipeds. For instance, the male of the Patagonia orca, in order to catch the otaries and in particular their young, gets up to the beach with the risk of remaining stranded there. 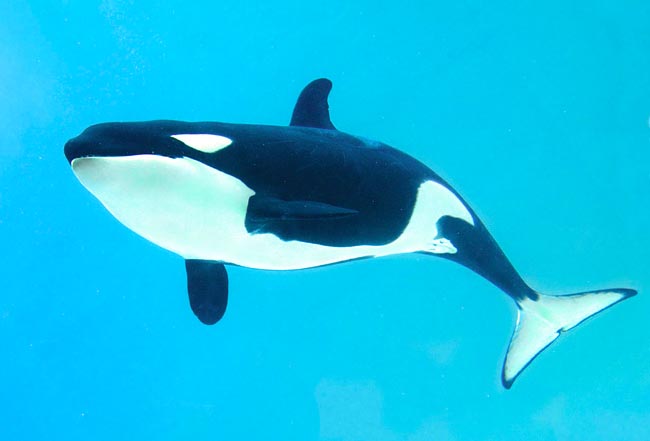 Once seize the pinniped, it takes it offshore, where the female with the weaned cubs is waiting, and before biting the prey the young play with the father, throwing each other the unfortunate pinniped thus training in the venatorial techniques.

The mating happens always belly against belly, so that the penis penetrates the vagina. The pregnant female has a gestation period of 12-16 months, the newborn measures 2-2,5 m with a weight of 180 kg about.

The suckling period, followed by the weaning, is of about 15 months.

The milk, a mix rich in fats, is very nourishing and allows the cub to reach remarkable weights in a relatively short time.