The two largest extant sharks are not ferocious predators as one might think, but they peacefully feed on plankton.

This is the case of the Basking shark [Cetorhinus maximus (Gunnerus, 1765)] that we find in second position, with the considerable maximum size of 15 m and with an estimated weight of 16 t, after the famous Whale shark (Rhincodon typus) that reaches the 20 m.

It belongs to the class of the Chondrichthyes, the cartilaginous fishes, and to the order of the Lamniformes, the same, coincidentally, of the Great white shark (Carcharodon carcharias), standing at the top among the predators in the world of the fishes, and to the family of the Cetorhinidae, born in the Late Cretaceous and represents nowadays the only member of this species.

The name of the genus Cetorhinus originates from the composition of the old Greek “κῆτος” (ketos) = sea monster and “ῥιvός” (rhinos) = nose, with a glance at the frightening bulk and that strange snout it has, stretched above the jaw, similar to a nose, whilst the specific term “maximus” = the biggest, in Latin, is again a reference to its shape.

Like Sphyrna lewini, the Scalloped hammerhead shark, Cetorhinus maximus is practically cosmopolitan, but whilst the first loves the warm temperate waters between 18,7 and 29 °C, this one lives in the cold temperate ones at temperatures included between 6 and 24 °C with a preference for those between 8 and 16 °C.

Present in the Atlantic and Pacific Oceans, is almost absent in the Indian, excluding western Australia. It can be found also in the Mediterranean where the 3-8 m long young are more frequent.

The Basking shark often swims in the surface at times bumping into the fishing boats, so much so that some have placed in the stern cruel fin-cutting blades, but for the major continental movements it prefers the calm of the depths, as is proven by the finding in its stomach some shrimps living only in the depths. It seems that it can go down up to 2000 m.

It approaches the coasts, entering even the brackish waters of the estuaries, but it remains, basically, a pelagic-oceanic animal.  Where water is cold, it has the odd habit to rest on the surface, at times resting on a side or face up, hence the English name of “Basking shark”, that is of a sunbathing shark. 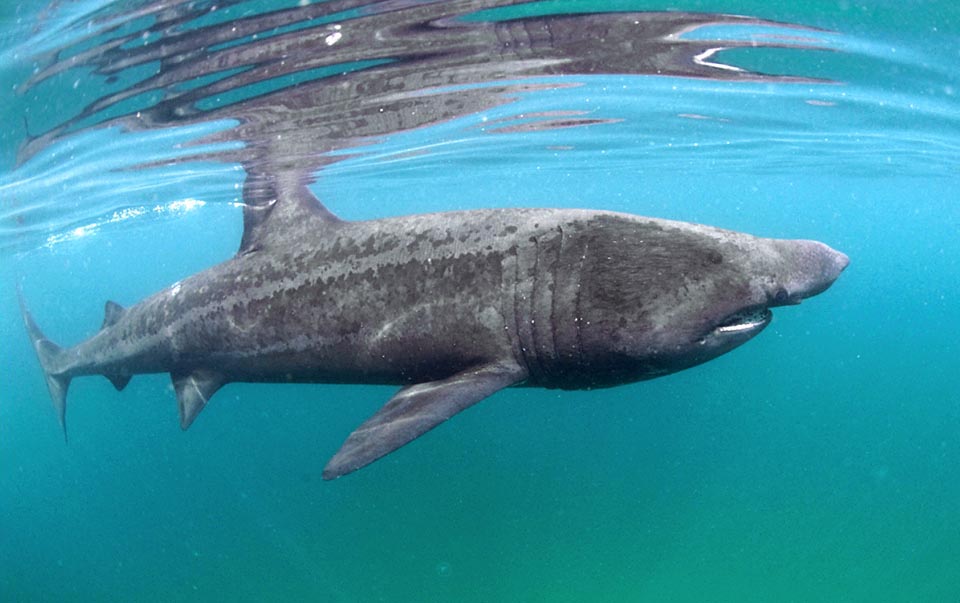 About 8 m long with 4-5 t of weight and a record of 15 m and estimated 16 t, is second after the Whale shark among the largest extant fishes © Nick Sidle

When moving, it does so lazily at the speed of about 3 km/h. In summer it looks for food on the surface whilst during the winter it follows the zooplankton currents that circulate in the depths.

The current size is about 7-9 m with a weight of 4-5 t. The body is fusiform starting from the first dorsal fin, which marks the maximum diametre of the fish.

The head is slightly compressed on the sides of the snout that in the juveniles ends in proboscis, a sort of nose destined to disappear upon puberty, rich as the head of electromagnetic receptors, the famous Ampullae of Lorenzini that it use to locate the planktonic concentrations and memorize the sites where they pass by means of the terrestrial magnetic field. 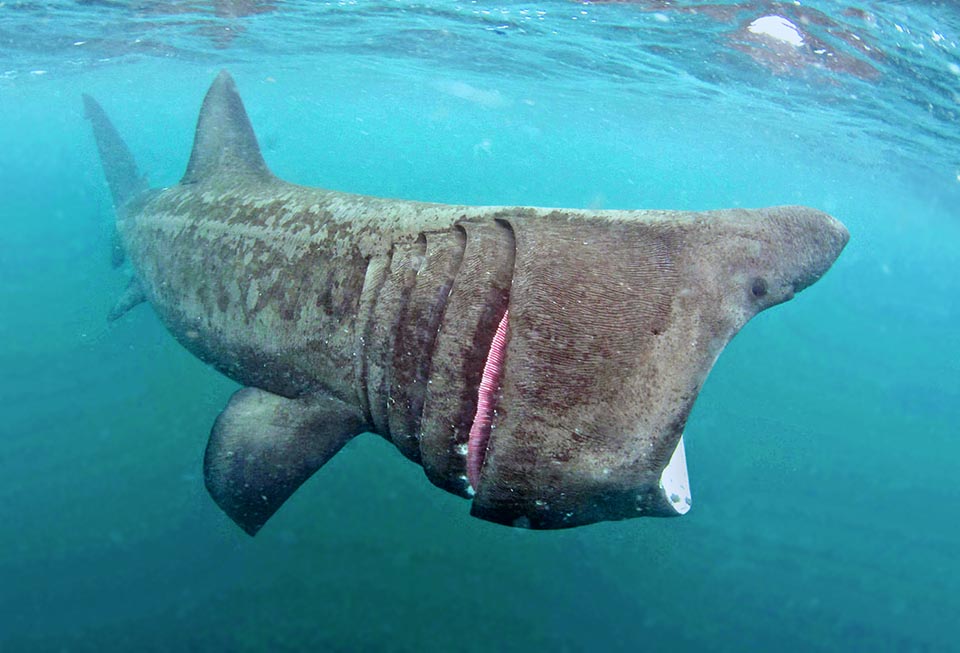 The young have on the snout a sort of nose that disappears with sexual maturity. Five huge branchial fissures surround the head © Christine Roberts

The pectoral fins, placed immediately after the fifth gill fissure, measure one seventh, of the total length, whilst the pelvic ones, shaped like the first dorsal, are about one fourth of this last.

The powerful caudal fin, asymmetrical, with the upper lobe about twice as large as the other, is preceded on the peduncle by prominent keels.

The eyes are small and do not have the protective nictitating membrane, absolutely useless as the fish must not protect them against the reaction of the preys and also the nostrils that hare do not need to find infinitesimal traces of blood.

Two huge openings surround the head protecting the gills. These, in addition to oxygenating the blood, have filters that hold the plankton while the fish advances mouth open: these bristles formed by 1000-1300 lamellae of keratin per each gill arch that renew regularly.

Compared to the size, the brain is very small if confronted with other sharks, because, practically, it serves only to memorize, like notes on a calendar and a geographical map, the places and the season where the sea is rich in plankton. 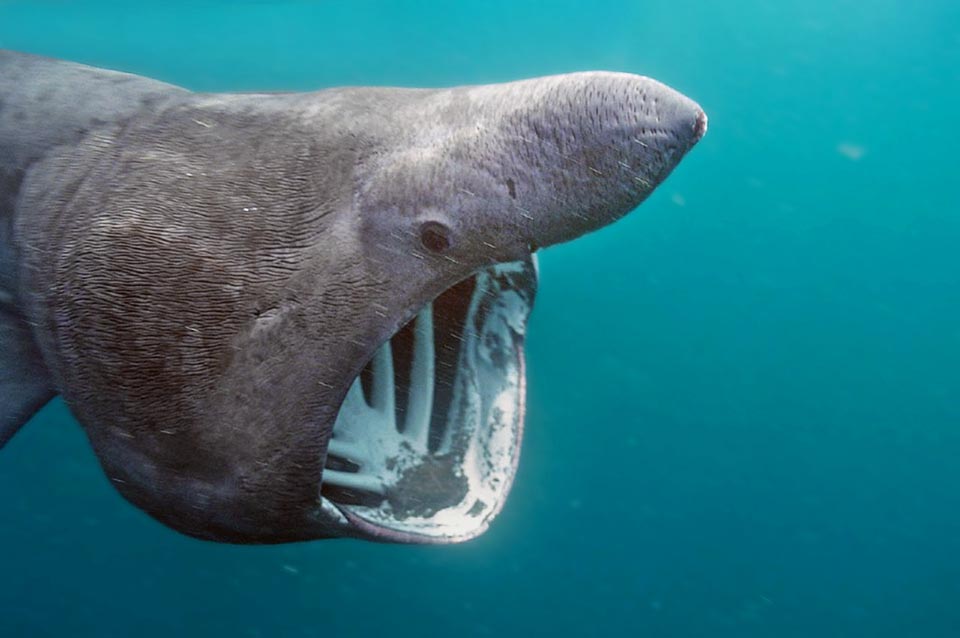 When it advances mouth open, the gills, in addition to oxygenate the blood, hold, with particular bristles, the plankton © Derek Haslam

The numerous but very small teeth are facing backwards to hold and swallow even small fishes. In a 4 m young they measure just 3 mm, and 6 in a 10 m adult.

They are arranged on more rows having about one hundred elements: 3-4 bands on the upper jaw and 6-7 on the lower one. And it is thanks to these tiny teeth that in the maternal womb the pups, after having exhausted their yolk sac, grow up gnawing that of the not fecundated eggs.

The livery tends to grey with whitish belly and possible clear spots or bands on the back and on the sides.

The huge stomach may contain even 500 kg of plankton mixed with small gregarious fishes such as sardines, mackerels and herrings. 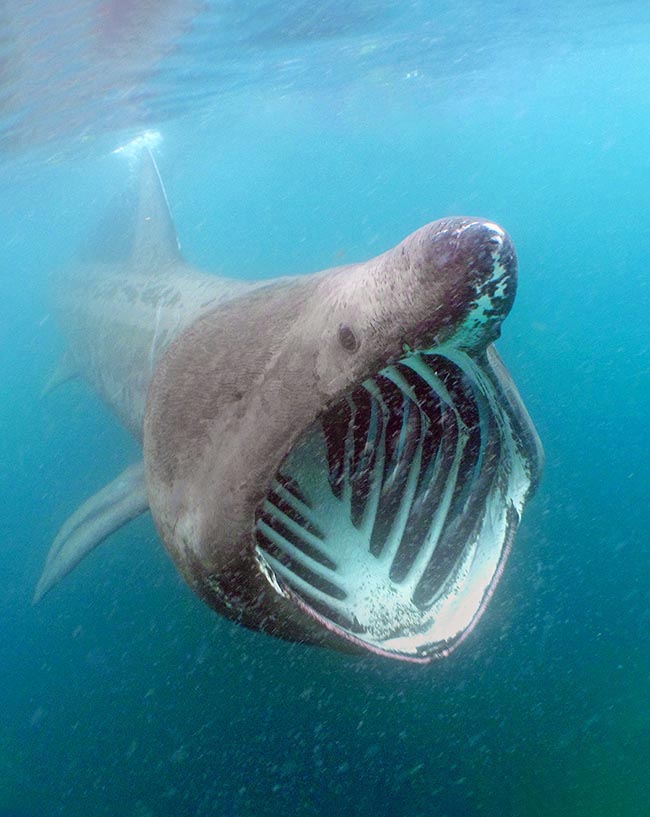 At 3 km/h an adult sieves more than 1000 t of water per hour. The stomach may contain even 500 kg of plankton to which often add also small fishes swimming in school, such as sardines, mackerels and herrings © Yo-Han Cha

The liver, which helps in floating, represents 15/20% of the fish weight. It often reaches the ton and can furnish averagely 600-700 litres of oil, used in times of famine also for frying and with therapeutic virtues, although less valuable than that of other fishes such as the cod.

Cetorhinus maximus chiefly nourishes of zooplankton, especially calanoid copepods such as Calanus helgolandicus that it gulps down advancing its mouth open. At 3 km/h and sieves more than 1000 t of water per hour.

It lives alone or in sometimes numerous schools.

These gatherings seem to be preliminaries of mating and it is not rare to observe a female swimming followed by more males in single file.

In front of such a show the sailors of the past were convinced to be facing a giant sea snake able to get on the ship to eat the crew as is shown by the imaginative representations of the time.

On these occasions have been seen males jumping out of the water like whales, perhaps for showing their strength, but they do it also in other circumstances for getting rid of remoras and lampreys like Petromyzon marinus who are unable to suck the blood because of the thickness. of the skin but that surely disturb them.

The males reach the sexual maturity when about 12-16 years old, the females between 16 and 20.

It is not well known how the mating takes place, but it is sure that seen the size and the absence of adequate teeth for blocking the partner, like other sharks, the coupling is not very stable when the male introduces one of its two, even one metre long, pterygopodia into the cloaca of the partner, for conveying about fifteen litres of sperm made in about 3 cm broad packets, called spermatophores.

Under these circumstances the gnarled skin leaves showy marks of abrasion on the sexual organs and by the end of the reproductive season, in spring, those more marked on the females lead to think that they have mated with more males.

The gestation seems to last more than one year and has been reported a pregnancy with 6 pups that upon birth should have exceeded the metre and a half.

After that the female must recover from the effort, and between one delivery and the following may pass 4 years.

The resilience of the species is extremely low, with a minimum time for doubling the populations of 14 years, and, moreover, the index of vulnerability to fishing is almost at its maximum marking 86 on a scale of 100. 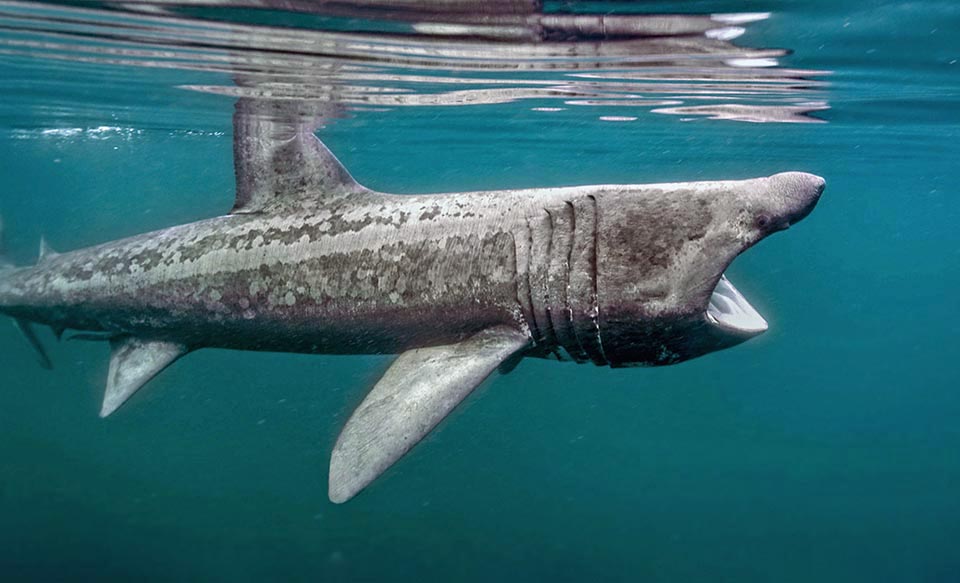 The females are ovoviviparous, and a Basking shark can live even 50 years, but the litters are not numerous and two deliveries may pass 4 years. Too much industrially fished in the past for the liver, that can give about 600-700 litres of oil, and still now in Asia also for the fins, it’s a species very close to extinction © Peter Bardsley

Even if today, in 2022, the industrial fishing is over, on the Asian market the liver of the Basking shark is still sold as aphrodisiac, the fresh fins at 1000 $ per kilo and the dried ones at 700 $.

Though Cetorhinus maximus seems to live 50 years, appears consequently nowadays like the known Scalloped hammerhead shark (Sphyrna lewini) and others, in the Red List of the endangered species classified as “Critically Endangered”, which means very close to extinction.