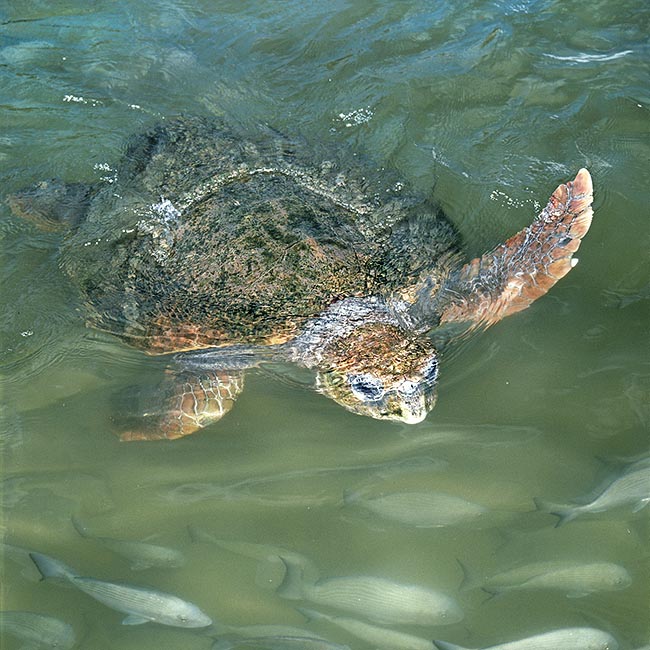 The Caretta caretta (Linnaeus, 1758) belongs to the class of the Reptilia, to the order of the Testudines, to the suborder of the Cryptodira, that differ from the Pleurodira because the first ones hide the head inside the carapace whilst te second ones bend their neck to the side.

The family is that of the Cheloniidae.

The term “caretta” is of uncertain origin. It might come from an incorrect trans- position of the term utilized in the former African French colonies of “karet”, that means probably “turtle shell”, or from the Caribbean, where it would indicate the Hawksbill sea turtle (Eretmoche- lys imbricata).

Caretta caretta is a cosmopolitan species, distributed in the temperate and tropical waters of the Atlantic, Pacific and Indian oceans.

The most relevant nidification sites are the eastern coasts of the Indian (Oman) and Pacific (California) oceans. It is also present in the Mediterranean, where, on the southern coasts, goes also for reproducing (Cyprus, Greece and mainly Turkey).

Caretta caretta in its juvenile phase, the first three-five years of life, practically from the eggs hatching to the sub-adult phase, gets carried by the currents. It often lives in the downwelling zones, that is the zones where the surface waters meet and tend to sink, creating a sort of backwash. These zones are characterized by the accumulation of floating material, especially weeds of the genus Sargassum. In this habitat Caretta caretta may feed of what it finds in surface, including small crustaceans and plastic bags, that lead to the turtle death due to bowel obstruction.

At times, the currents can make the animals stationing close to the beach where has happened the hatching for months, until when they are taken far away by the currents. The juvenile phase begins when the animal goes offshore. This phase is estimated between the seven and twelve years, its habitat being the pelagic zone. Only when the animal exceeds about the 50 cm of Curved Carapace Length (CCL: this is a typical measurement unit for monitoring the sea turtles and deduce the age of the animal, consisting in the length of the carapace taken from the head to the tail measuring the whole extension of its dorsal curve) it is capable to regain the costal areas. 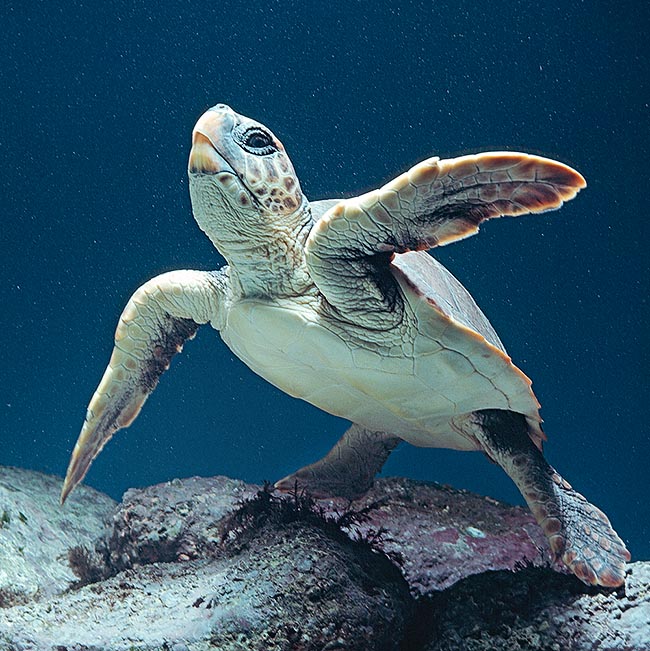 In the neritic zone Caretta caretta reaches the adult age and the sexual maturity, estimate at 25 years, but it is probable that this average is an underestimation. Depending on the populations the animals may perform more or less ample migrations from the neritic zone to the pelagic one, probably for alimentary reasons.

When living in the pelagic waters as well as in the neritic ones, the feeding of Caretta caretta is primarily carnivorous, even if it eats also vegetal material. The diet varies depending on the populations, and also on the phases of life, but the studies done on this matter are rare and really little is known on the oceanic juvenile phases.

For what concerns the predation the juvenile phases are of course the most vulnerable: the nestlings just after the hatch may be attacked by crabs and gulls. In the juvenile phase the sharks represent the main predators, especially the Galeocerdo cuvieri, the tiger shark. In the adult phase, it is documented that Caretta caretta can defend from the sharks attacks by exposing the carapace as a shell. During the deposition the females are very vulnerable, and may be threatened and killed by the wild dogs. However, man seems to represent the greatest danger for the adult animal, that in nature has very few predators.

Caretta caretta is parasitized by several species of parasites of various groups: annelids,cestodes, nematodes and, especially, trematodes. Only the sick specimens are parasitized by cutaneous crustaceans. It has also mutual symbiosis relations with small scavenger fishes the animal frequents regularly for getting the epidermis cleaned from the parasites.

The carapace in the adult as well as in the young animal is reddish-brow, like also the lateral and dorsal scales covering the head and the legs, shading yellow on the margins. The zones not covered by scales are brown, but turn yellow laterally and ventrally. The plastron, the ventral part of the carapace, is pale yellow. The bony carapace is covered by not overlapped scutes, that are not osseous but corneous, and that meet along the sutural lines. Usually there are 11 or 12 pairs of marginal scutes, five costal pairs, five vertebral and one nuchal. Conversely, the plastron is formed by the gular, humeral, pectoral, abdominal, femoral and anal pairs. 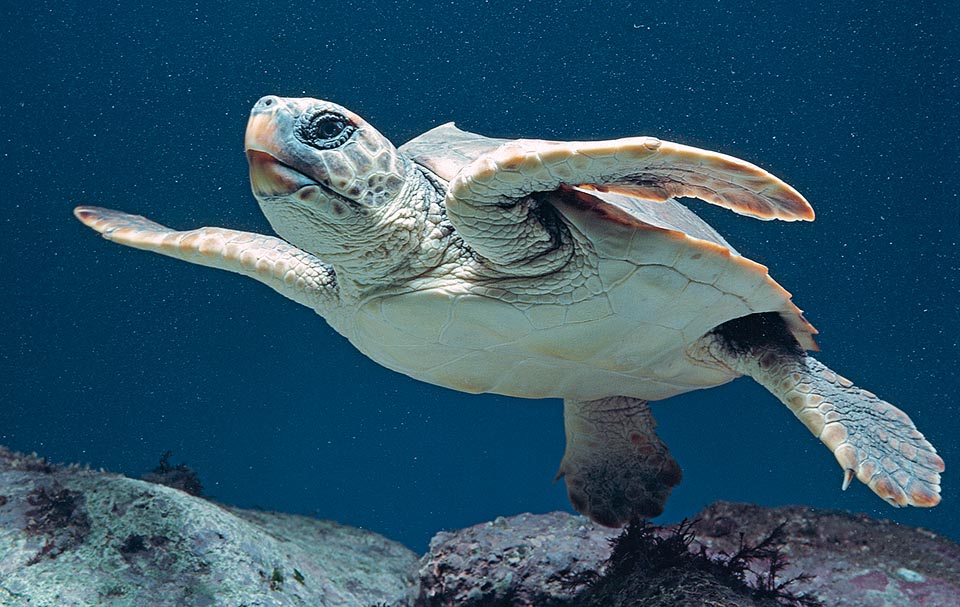 The main foe for the Caretta caretta is the man. Dies choked entangled in the nests and if they are not taken in time fishermen often mutilate them not to ruin the nets thus condemning them to die starving. Moreover the vagrant plastic bags can be mistaken with jellies and cause serius bowels occlusions © Giuseppe Mazza

The nestlings vary in colouration from pale brown to dar brown with dark grey back. They miss of the typical brown-reddish colouration of the adult. Also the legs are dark grey to brown in the upper part, with white margins Caretta caretta can reach a maximum length of about one metre and can exceed the 100 kg of weight. Nothing is known about the longevity of this species, but basing on the estimations it has been hypothesized that the female lives up to an age included between the 47 and the 62 years.

Caretta caretta lives its entire life swimming in the oceanic waters, apart when the eggs are to be laid. Also the mating, that may take several hours, happens completely in water, usually clsoe to the surface where the animals must in any case get back to breathe. The submersion period may vary depending on the activity of the animal, but can last even 3 hours.

When laying eggs they do not form the so-called “arribadas” typical of the genus Lepydochelis, even if more females can lay simultaneously on the same beach. The deposition goes through a series of fixed phases. The turtle tries to carry out them all also in the case of real difficulties (impairments to legs, impenetrable obstacles). 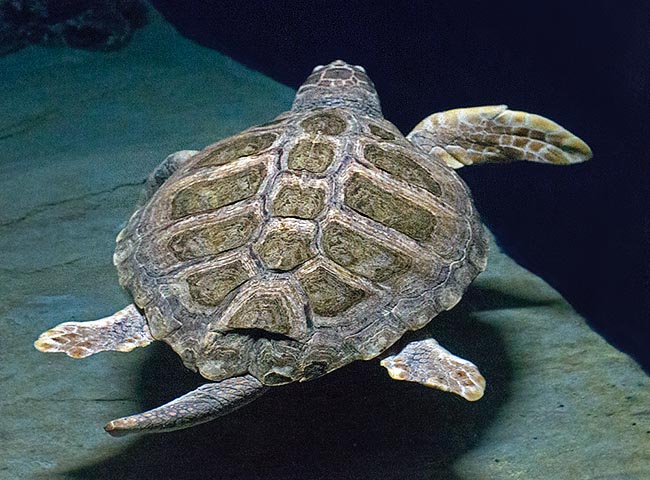 The bony carapace is covered by not overlapped scutes, not osseous but corneous, and that meet along suture lines. Can exceed 100 cm and 100 kg of weight. Sexual maturity occurs when about 25 years © Giuseppe Mazza

If the animal is disturbed, as is increasingly the case, by the man, the deposition does not complete, but sometimes following always the same ritual (for instance, the animal covers the eggs chamber but without having laid the eggs).

The females that have interrupted the deposition can go back during the following evenings for a second attempt.

Caretta caretta is considered a species that easily adapts to different conditions, but they are quite sensitive to the low temperatures. Conversely, they are much susceptible to the anthropic disturbance.

They often remain entangled in the fishing nets, especially in those for fishing shrimps, that is a fishing typology very diffused in the oceans, and that foresees long periods of continuous fishing.

Death may occur for choking, because the entangled animal cannot reach any more the surface for breathing, or because the fishermen prefer to mutilate the animal rather than ruin the nets. The mutilated and abandoned animals are no longer able to feed.

As Caretta caretta nidifies in the tropical and subtropical areas it is thought that they migrate also seasonally from the reproduction zones to winter ones, but, actually, little is known about their movements.

There are reports of turtles having occupied submarine dens for long periods of time and that can be also very territorial and aggressive, with the conspecifics as well as the other species. Among the Tamil fishermen it has earned the name of “nai amai”, sea-dog, rightly for the tendency to bite the fishermen who tried to raise it onboard.

In literature, there are no indications of movements in schools of Caretta caretta, but during the mating period may form some local gatherings close to the deposition beaches. 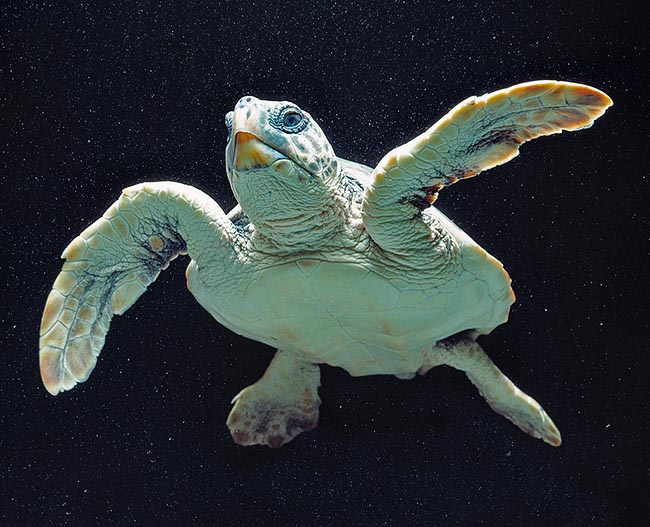 The Caretta caretta can reach the 62 years and spends all life swimming, but when laying the eggs. Also mating, that can last several hours, occurs at sea, usually close to the sites chosen for reproduction © Giuseppe Mazza

The sea turtle Caretta caretta usually nidifies on oceanic beaches (rarely close to the mouths of rivers), typically wide and sandy, that have a frontal approach sandy too and that slopes gently toward the sea, probably because easier to climb for these animals.

The season where the peak of births occurs is the warm one, but in the subtropical and tropical zones the depositions take place continuously. The nests are dug between the high tide line and the front of the dunes. The substratum must be very humid, in way to allow an efficient gas exchange between the eggs and the outer environment. One female lays roughly 100-130 eggs that are incubated in a completely covered with sand nest for a long time that depends directly on the incubation temperature.

The more the temperature is high, the more the embryos develop quickly: between the 26 and the 32 °C an increment or decrement of just one degree centigrade may anticipate or delay the hatching of five days. Also the sex determination is temperature dependant. Incubating temperatures close to the 32 °C produce only females, whilst temperatures close to the 26 °C produce only males. When 29 °C the clutch produces about the same number of females and males. When the eggs open the newborns dig towards the surface in order to quickly reah the sea. Usually this takes place during the night, period during which the unarmed young have more chances of reaching the water. Probably, the event is triggered by the brusque decrease of temperature of the sand at the surface during the night. The newborns are guided by the light gradient to reach the water (the sea tends to be more luminous than the sand dunes). For this reason, the illumination of the coasts may be a hindrance.

The small turtles do not hold very big mobility skills and are mostly transported by the currents, but after a more or less short period, after having started to feed autonomously, the move offshore, where they grow up and when adult they complete their vital cycle reaching the sexual maturity. The mating happens in the neritic waters, close to the deposition zones. The female goes back to lay the eggs close to the place of its birth, alone. The parental cares are absent. 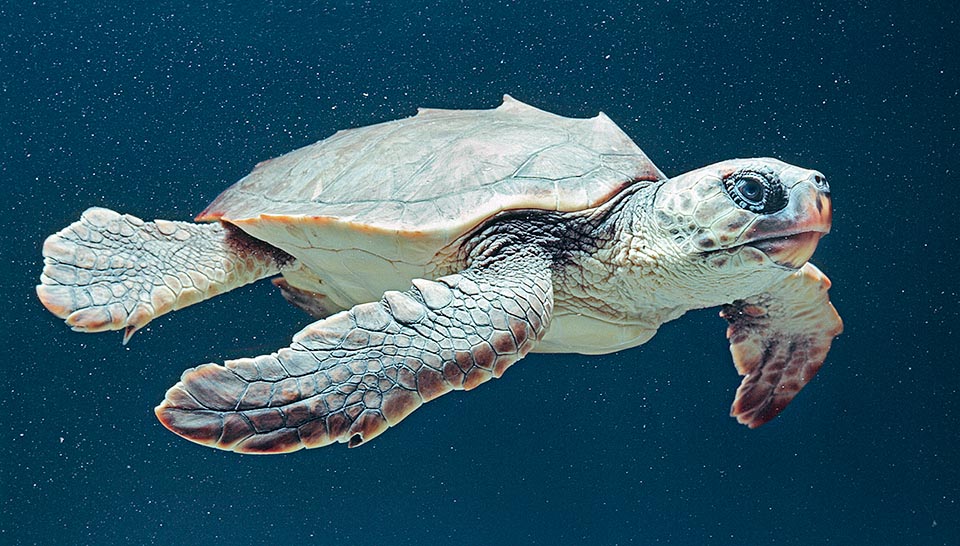 A female lays about 100-130 eggs in a sanded nest. Incubation time and unborn sex depend on temperature. When around 32 C only females are born, by 26 °C only males. When 29 °C the nestling produces about the same number of females and males. The parental cares are absent © Giuseppe Mazza