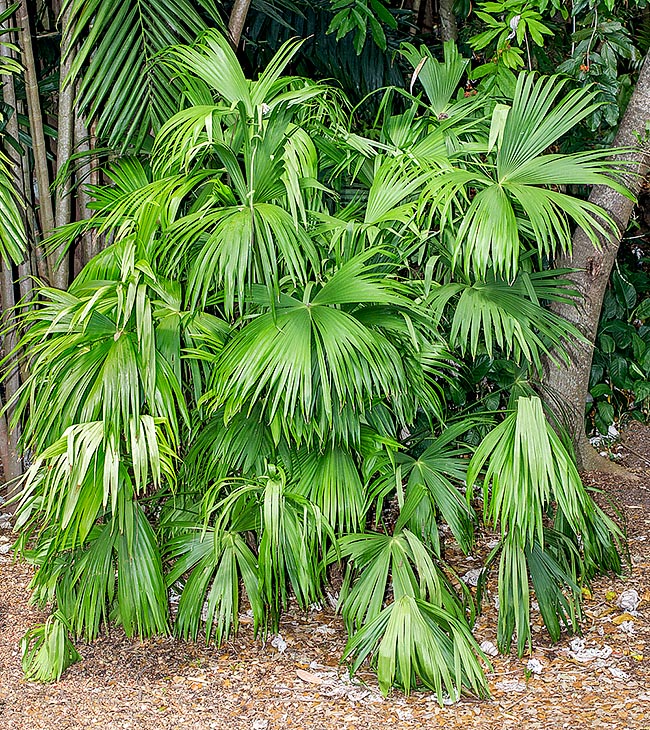 At first sight seems a palm but the Carludovica drudei of tropical America is a herbaceous species belonging to another botanical family: the Cyclanthaceae, Caespitose acaulous rhizomatose, it may be 2,5 m tall © G. Mazza

The species is present in nature in Colombia, Costa Rica, Ecuador, Guatemala, Mexico (Chiapas, Oaxaca and Tabasco), Panama and Venezuela where it grows in the underwood of the humid forests mainly along the water streams, from the sea level up to about 1700 m of altitude.

The leaves, on an almost cylindrical petiole up to 2,5 m long, wrapped at the base, are simple, palmate, up to about 1,6 m broad, of intense green color above, opaque below, divided almost up to the base in 4 cuneiform lobes of variable amplitude, 60-75 cm long and 35-60 cm broad, in turn subdivided for a length of less than the half in linear-lanceolate segments with acuminate apex.

Inflorescences from the axil of the leaves, on a 40-70 cm long peduncle, formed by a fleshy cylindrical spadix, about 11 cm long, and of 1,5 cm of diameter when in flower, 20-25 cm long and of 4 cm when in fruit, initially enclosed by 4 imbricate spathes up to 25 cm long. The spadix is totally covered by the unisexual flowers united in groups of 5 spirally arranged, every group is formed by 4 male flowers that surround the female flower.

Male flowers, having no sepals and petals, with numerous and thick stamina covering wholly the female flowers, but the 4 filiform staminodes, up to 7 cm long of white or yellowish white color. 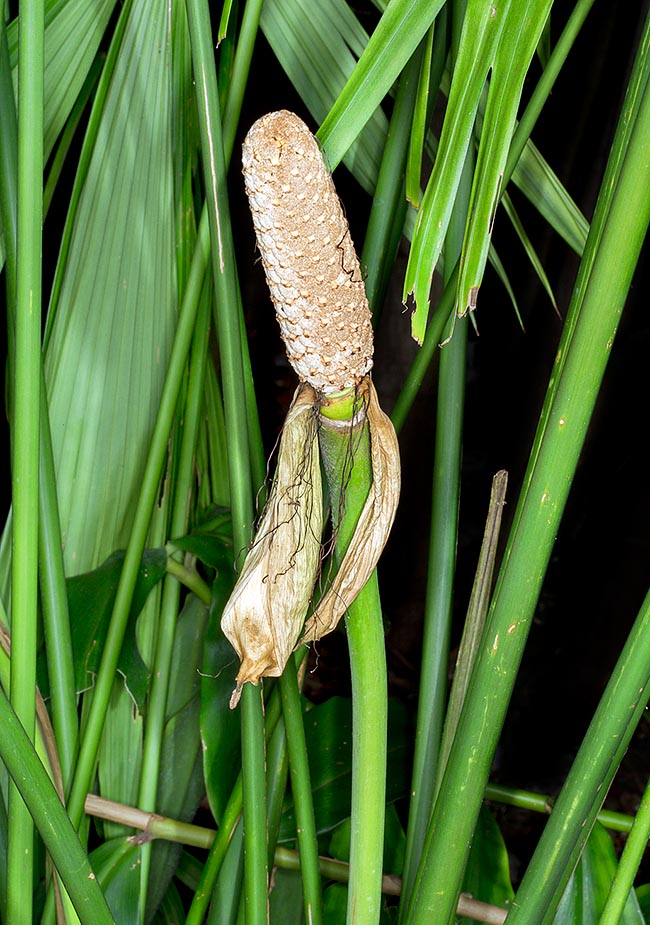 Protogynous inflorescences. Male and female flowers, pollinated by coleopterans, ripe in fact in different times to favour the crossed fecundation. The young leaves, the unripe infructescences and the fruits, when cooked, are edible © Giuseppe Mazza

The inflorescences are protogynous, favoring the crossed fecundation, the female flowers ripe by the opening of the spathes and attract the pollinating insects (coleopterans) with the smell emitted by the long staminodes.

The following day, when the are not any more receptive and the staminodes are withered, takes place the male phase with the opening of the anthers covering of pollen the pronubial insects that will deposit it on another inflorescence in the female phase.

The fruits are oblong berries merged to form a cylindrical, fleshy, syncarp covered by a thin woody layer of greenish color formed by the residues of the tepals.

This woody layer opens when ripe starting from the apex exposing the rachis of orange red color and the oblong berries of the same color, about 1 cm long and of 0,7 cm of diameter, containing several ovoid seeds, flat, about 2 mm long.

It reproduces by division and by seed put in draining organic loam maintained constantly humid at the temperature of 26-28 °C.

Little known species that however presents remarkable ornamental characteristics, cultivable in the tropical and constantly humid subtropical climate, in shady position, on soils rich of organic and draining substance; it does not stand dry periods, even if short.

Since remote times the local populations utilized the plant as food and for realizing handicrafts. The young leaves, the unripe infructescences and the fruits are consumed cooked and added to other ingredients; from the petiole and the young leaves are extracted the fibers with which are realized various common use objects, including, hats, but less famous then the “panama”, done with the fibers of the Carludovica palmata Ruiz & Pav. (1798).

→ To appreciate the biodiversity within the CYCLANTHACEAE family please click here.