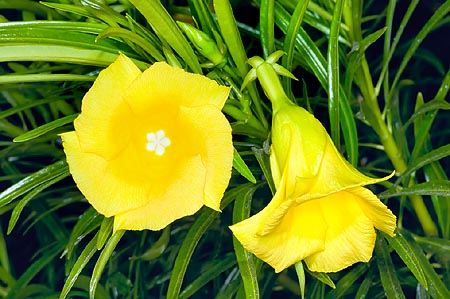 The name of the genus comes from the name “cascabel” with which the plant is called by the local populations; the species is honoured to the French missionary and explorer André Thévet (1502-1590) who described flora and fauna, as well as customs and traditions, of the natives, of Rio de Janeiro Bay, and who, the first, imported in Europe, in 1556, the plant of tobacco.

Evergreen shrub or small tree, tall up to 6-7 metres, with green stems tending to the greyish when ageing; the leaves are linear, about 15-18 cm long and 0,6-0,8 broad, of a glossy intense green colour. The inflorescences are terminal with funnel-shaped flowers of a generally yellow colour, less frequently white and peach, with a diameter of about 5-7 cm, slightly perfumed. The fruit is a woody and rhomboid drupe, broad about 4 cm, of a green colour, tending to the black with black when ripe, containing 1-2 (4) lenticular seeds. It reproduces by seed and by woody cutting in summer.

Widely cultivated plant in tropical, subtropical and warm temperate countries, due to its luxuriant foliage and the long-lasting blossoming. Little particular as soil, as long as well drained, is to be placed in full sun for getting a more compact appearance and a richer blooming; the resistance to low temperatures is not much, the foliage gets spoiled at temperatures of -1/-2°C, temperatures lower of a few degrees cause harm to the whole aerial part, but the plant, generally, vegetates again. All the parts of the plant are highly toxic, particularly, the seeds, which contain, among other things, a cardiac glycoside, (the Thevetin), with an action similar to that of the digitalis.