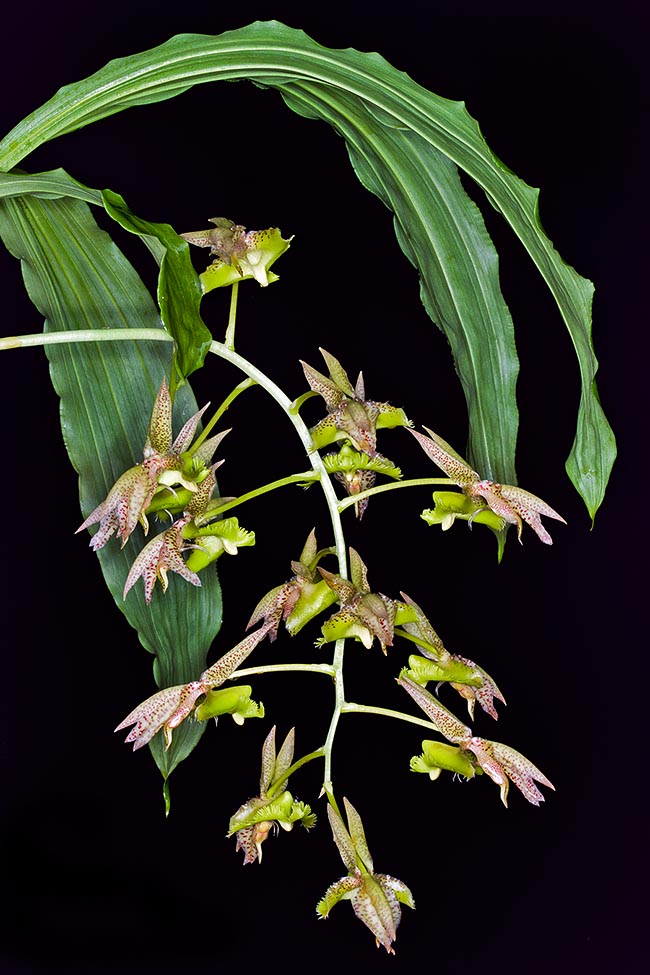 Catasetum fimbriatum is an epiphyte or lithophyte of Central America regions with markedly seasonal climate. It often forms dense tufts with fusiform 8-20 cm pseudobulbs, and 30-35 cm leaves deciduous in winter during the rest period. The male inflorescence, here shown, reaches the 25-40 cm with even 20 flowers © Giuseppe Mazza

The species is native to Bolivia, Brazil (Espírito Santo, Federal District, Goiás, Mato Grosso, Mato Grosso do Sul, Minas Gerais, Paraná, Rio de Janeiro, Rio Grande do Sul, Santa Catarina, São Paulo and Trinidad), Northern Argentina (Corrientes, Formosa, Jujuy, Misiones and Salta), Paraguay and Venezuela where it grows on the branches of the trees, on the trunks of palms or on the rocks, in zones characterized by marked seasonal climate, between 600 and 1000 m of altitude.

The name of the genus is the combination of the Greek preposition “κατά” (catá) = under, down and of the Latin substantive “seta, ae” = bristle, horsehair, with reference to the antenniform appendices bent downwards present at the base of the column in the male flowers; the specific name is the Latin adjective “fimbriatus, a, um” = fringed, with reference to the margins of the male flowers labellum.

The Catasetum have a particular characteristic within the family of the Orchidaceae, as they present unisexual flowers on the same inflorescence or, more frequently, on different inflorescences, only rarely hermaphrodite, characteristic shared only with Cycnoches, (many species of Mormodes have flowers having a marked dimorphism, but functionally are hermaphrodite). Moreover, the diversification of the sex takes place in the initial phase of the development of the inflorescence depending on the ambiental conditions, it has been noted that plants living in shady situations with high ambient humidity produce mainly male flowers, whilst those in very luminous position with low humidity produce female ones, in intermediate situations there may be alternatively flowers of the two sexes.

The Catasetum fimbriatum (C. Morren) Lindl. (1850) is an epiphytic or lithophytic species of big size that forms dense tufts with fusiform pseudobulbs, 8-20 cm long and of 3-5 cm of diameter, provided of oblong leaves with pointed apex, plicate, 30-35 cm long and 6-10 cm broad, deciduous in winter during the resting time. Inflorescences from the base of the pseudobulb arcuate, drooping, the male ones 25-40 cm long and with numerous flowers, up to 20, shorter and with few flowers the female; the flowers are fleshy, waxy and intensely perfumed. Resupinate (with the labellum down, under the column) male flowers with sepals and petals of pale green colour suffused and dotted of brown red, greenish yellow labellum and white column. Lanceolate sepals with pointed apex, 2,8-4 cm long and 1-1,5 cm broad, erect petals, tight, slightly smaller then the sepals, cordate labellum, saccate in the centre, with fringed margins, 3 cm long and 4,2 cm broad, and column, about 2,5 cm long, with at the base two antennae sensitive to the shocks, about 1 cm long. 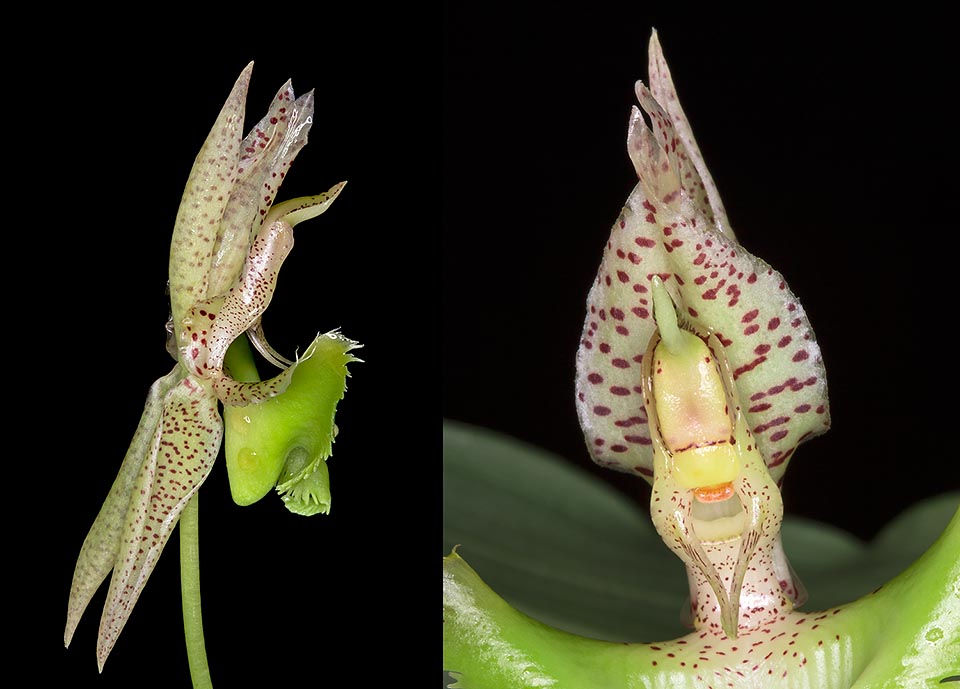 In the Catasetum world the sex of the inflorescence depends on the light and humidity. The rule is unisexual flowers on different inflorescences, but various exceptions exist. Here the male flower, seen by side and front, in detail, to evidence the springs that, just touched, catapultate the polllen masses on the passing-by insect © Mazza

Non resupinate female flowers (with the labellum up, over the column) of yellowish green colour with ovate-oblong sepals and petals, 2,2-2,8 cm long and 1,2-1,5 cm broad, saccate labellum with entire margins and pointed apex, 3,2-3,6 cm long and 1,6-2 cm broad, and short column having no anther and antennae. A further particularity distinguishing the genus is the facinating system of pollination, when an insect slightly bumps the antennae placed on the column of the male flowers, the pollinarium is catapulted explosively, with a speed that has been estimated, with high-speed filmings, around the 2 m/s, on the body of the insects where it sticks by means of the viscidium (or retinaculum), viscous and sticky mass connected with the pollinia through a peduncle. The photo here below shows on the left an intact flower and on the right, one, mechanically stressed, that has expelled the pollinarium, visible on the margin of the labellum to which adheres with the viscidium. It reproduced by seed, in vitro, micropropagation and division, at the vegetative restart, with each section provided preferably of 2-3 pseudobulbs. 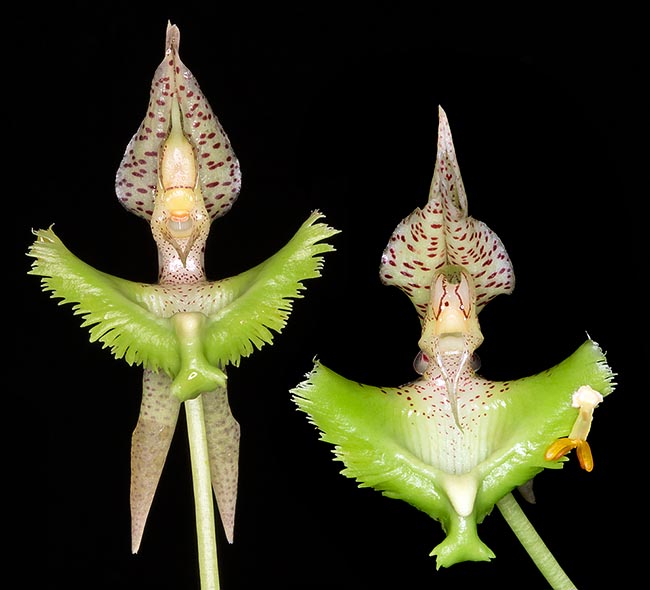 A smiling flower, waiting for the pronube, and one looking sad because has just missed the target. Its two yellow pollen sacs are now well visible, stuck to the labellum with the sticky viscidium intended for the insects © Mazza

Frequent and abundant waterings when in full growth, almost suspended during the resting time until when the new vegetations have not reached a length around the 4-5 cm, giving only the water strictly necessary so as not to shrivel the pseudobulbs, in the morning in order to give the roots time to dry up before evening, being these particularly sensitive the rottenness during the rest period; the resuming of the waterings must occur in a progressive way.

Fortnightly fertilizations from spring to autumn utilizing a balanced hydro- soluble product, with microelements, at ¼ the dosage suggested on the package. It can be mounted on trunks or rafts of cork or of roots of arborescent ferns with a particularly aerated and draining compost that can be formed by bark fragments and medium-sliced charcoal with possible addition of inerts.

The repottings, when necessary, are to be done during the vegetative restart.