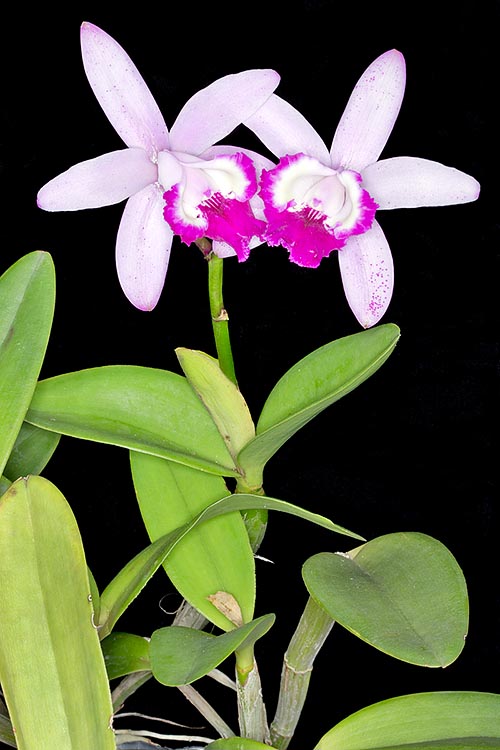 Cattleya intermedia is native to South-East Brazil. The here shown variety 'Orlata Rio' has the margins of the labellum lateral lobes of the same colour as the median lobe © Giuseppe Mazza

The species is native to South-eastern Brazil (Espírito Santo, Minas Gerais, Paraná, Rio de Janeiro, Rio Grande do Sul, Santa Catarina, São Paulo and Trindade), Paraguay and Uruguay where lives as epiphytic on low trees or on granitic rocks close to water streams and the sea, up to about 300 m of altitude.

The genus is honoured to the horticulturalist William Cattley (1788-1835) who first devoted himself to the cultivation of orchids in England; the name of the species is the Latin adjective “intermedius, a, um” = intermediate, with reference to dimensions of the flower inside the genus at the time of its description.

The Cattleya intermedia Graham ex Hook. (1828) is an epiphytic or lithophytic species with almost cylindrical close pseudobulbs, 10-40 cm long and of 1,5 cm of diameter, with at the apex two oblong-ovate practically opposite, 10-15 cm long and 4-6 cm broad, fleshy leaves.

About 25 cm long inflorescence initially contained in a green membranous bract (spathe) with united margins, but at the apex, about 5 cm long, which has the task of protecting it during the initial phase of the growth. Flowers, usually 2-5 per inflorescence of about 10 cm of diameter, of much variable colour, from white to pink, to lilac, in various tonalities, with median lobe of the labellum usually purple-amethyst. Dorsal oblong-lanceolate sepal, 6,5 cm long and 1,5 cm broad, with pointed apex and retroflexed margins, falcate lateral sepals, 6 cm long, undulate, lanceolate petals, 5,5 cm long and 1,5 cm broad, falcate, undulate, trilobed labellum 5 cm long and 4 cm broad, with lateral lobes curved over the column and sub-rounded curved median lobe with waved and ruffled margins. The flowers are slightly perfumed and are long-lasting, about one month.

It reproduces by seed, in vitro, by micropropagation and easily by division, with each section provided with at least 4-5 pseudobulbs.

Much variable species in size of the plant and colour of the flowers, as proven by the number of synonyms, much required and appreciated by the collectors due to its beauty and adaptability to different conditions of cultivation, countless horticultural varieties have been selected, among which some peloric ones (characterized as having the petals almost equal to the labellum per shape and colour), and has been amply utilized in the hybridizations. It requires high luminosity, but not direct sun, but in the first morning hours, medium-high temperatures, with lowest winter values not under the 14 °C, high environmental humidity, 60-80%, and constant ventilation. Regular and abundant waterings, but letting to well dry up before watering again, during the vegetative period, more spaced, up to almost suspend them for some weeks in winter; for the watering and the nebulisations is to be utilized rainwater, by reverse osmosis or demineralised. Fertilizations, during the growth, every two weeks preferably using a balanced hydrosoluble product, with microelements, at half the dosage shown on the package. It can be cultivated in pot with particularly aerated and draining compost that can be formed by medium-sliced bark fragments and crushed granite stone or earthenware fragments, with addition of charcoal, or mounted on trunks. Repottings and divisions, when necessary, are to be done by the vegetative restart signalled by the appearance of the new roots.