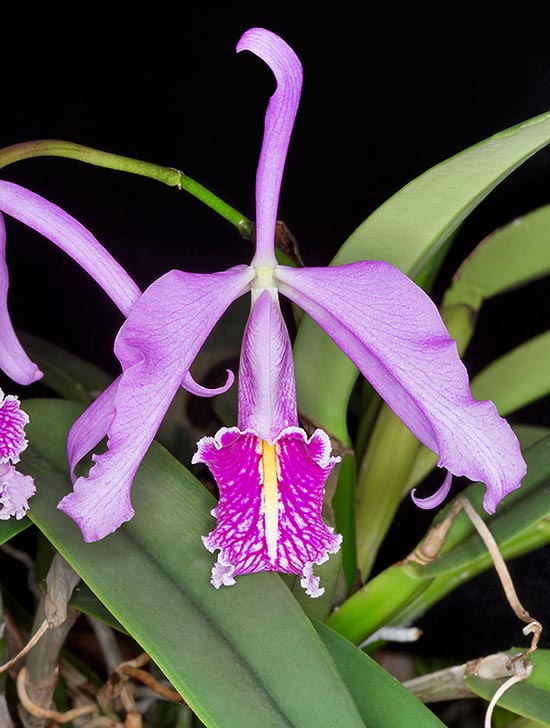 Native to Colombia, Ecuador, Peru and Venezuela, the Cattleya maxima is an epiphyte, rarely lithophyte, cespitose with creeping rhizome from which come, at each vegetative season, one or two pseudobulbs. Perfumed flowers, even 14 cm broad that have originated many hybrids © Giuseppe Mazza

The species is native to Colombia, Ecuador, Peru and Venezuela where it grows in the costal forests, from the sea level up to about 1500 m of altitude, in areas characterized by seasonal climate.

The genus is honoured to the English grower and collector William Cattley (1788-1835); the specific name is the superlative of the Latin adjective “magnus, a, um” = big, considerable, with reference to the size of the flower in respect to those of the species of the same genus known at the time of its description.

The Cattleya maxima Lindl. (1833) is an epiphytic species, rarely lithophytic, cespitose with creeping rhizome from where originate every vegetative season one-two clavate pseudobulbs, laterally flattened, 10-35 cm long, provided at the apex of only one oblong leaf with bilobed apex, 20-25 cm long and 5-7,5 cm broad, coriaceous, of bright green colour. The plants that grow at low altitudes are usually great and robust, those growing at higher altitudes have more contained dimensions.

Erect or arcuate terminal inflorescence, enclosed in the initial phase of growth in a membranaceous bract (spathe) 10-12 cm long, bearing 3-20 flowers, of 10-14 cm of diameter, perfumed and long lasting, 3-4 weeks, with sepals and petals pink to lilac and pink labellum streaked purple with a yellow band at the centre; in nature do exist white individuals with yellow band at the centre of the labellum. Linear-lanceolate sepals with pointed apex, 6-8 cm long and about 1,6 cm broad, oblong-lanceolate petals, of the same length as the sepals and 3,5-4 cm broad, trilobed labellum, 5-7 cm long and 4 cm broad, with oblong median lobe with ruffled and wavy margin and lateral lobes curved over the column, about 2,6 cm long.

It reproduces by seed, in vitro, micropropagation and division, at the vegetative restart, with each section provided of at least 3-4 pseudobulbs. Orchid that has had in the time fluctuating fortunes with the collectors, probably due to the sepals and petals rather thin in respect to those of other Cattleya, but that has originated numerous hybrids. The species seems to well adapt to different conditions of exposition, from slightly shady to full sun for some hours per day, in particular in winter and of temperatures, medium-high, up to 35 °C in summer, with high daily thermal excursion, cooler in winter, with lowest night ones up to 10 °C or little less; necessary is, in all seasons, a good and constant ventilation. They are to be watered regularly and abundantly during the growth period, but allowing the compost to partially dry up between the waterings, utilizing rain water, demineralized or by reverse osmosis, spaced during the rest, letting to dry up completely before giving water again. The ambient humidity must be high, 65-80%, during the vegetative phase, lower, 50-60% during the rest. Fertilizations in spring-summer every two weeks with a hydrosoluble product preferably balanced, with microelements, at ¼ of the dosage suggested. It is usually cultivated in pots or baskets with draining and aerated compost that may be formed by bark fragments and medium-sliced charcoal, but ma be also mounted on trunks or pieces of bark; repottings and transplants are to be done at the vegetative restart signalled by the emission of the new roots.