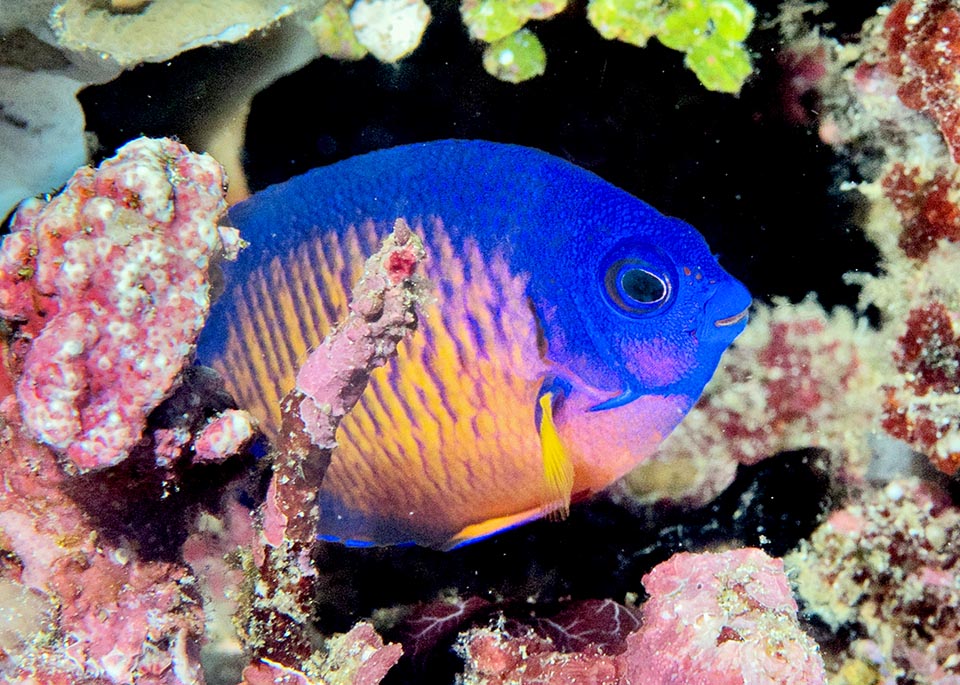 The Twospined angelfish (Centropyge bispinosa Günther, 1860), called also Coral beauty angel, belongs to the class of the Actinopterygii, the ray-finned fishes, to the order of Perciformes, to the family of Pomacanthidae and to the genus Centropyge which is the most numerous of the family with 32 species.

The etymology of Centropyge comes from the Greek “kέντρον” (kentron) = sting and “πυγή” (pyg) = rear with reference to the showy spine of the operculum bent towards the tail. 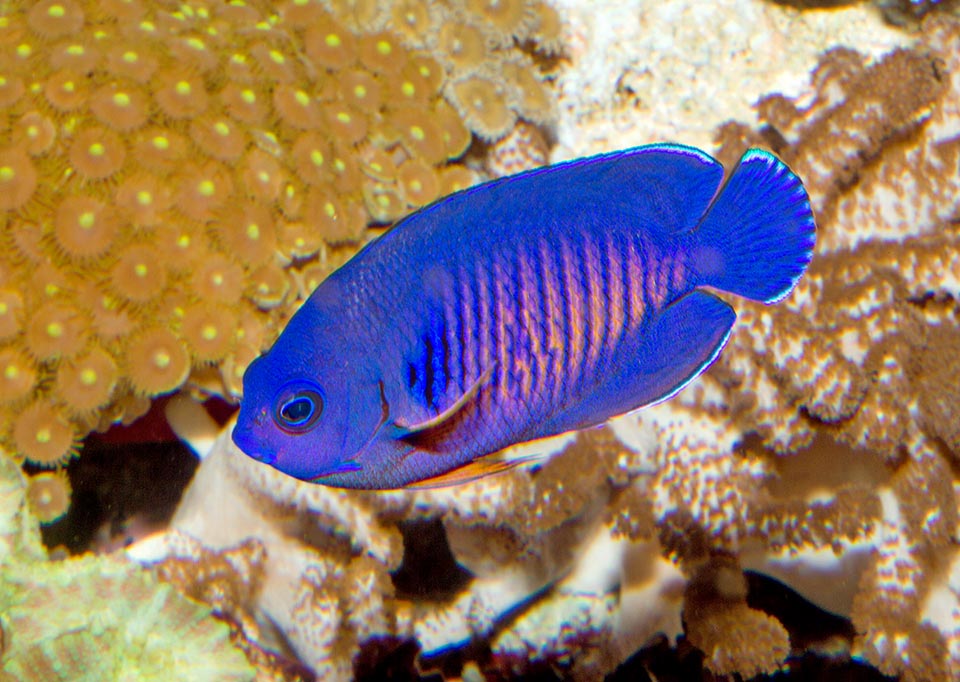 10 cm at most long, it lives usually in shallow waters sheltered by the madreporic formations between 5 and 45 metres of depth © Giuseppe Mazza

The name of the species bispinosa comes from the Latin “bis” = twice and “spinosus” = spiny with reference to the long spine it has on the two opercula.

It is present in the tropical waters of the Indo-Pacific. 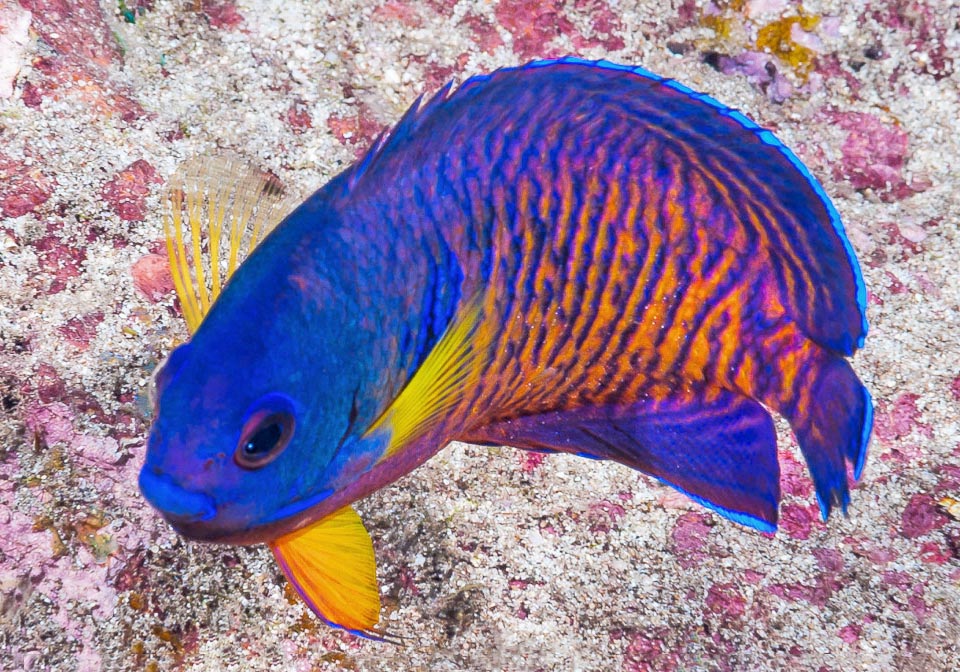 Omnivorous, mainly eats algae, but also polyps of madrepores, sponges and ascidia. The showy livery is very mimetic in the multicoloured light and shade of the corals © François Libert

We find it, as an indication, in South Africa, in East Africa and in Madagascar, but is absent in the Red Sea. Then at the Seychelles, the Andaman and the Maldives, in Malaysia, Indonesia, New Guinea, Australia, Micronesia, Philippines, Taiwan and China up to the southern part of Japan with the islands of Ryukyu and Ogasawara.

Eastwards, it has colonized Vanuatu, Samoa, Tonga, Tahiti and Tuamotu.

Southwards, after New Caledonia, it has reached Lord Howe. 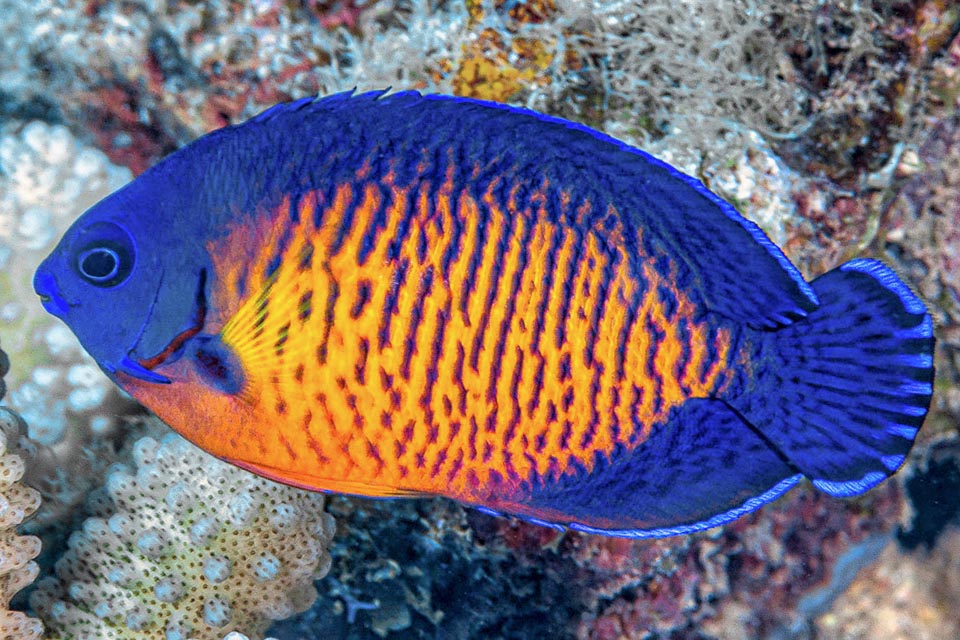 It lives among madrepores and the corals, in the lagoons, in the submerged grasslands and on the cliffs of the reefs, usually between 5 and 45 m of depth.

It can reach the 10 cm of length, but rarely exceeds the 8 cm. 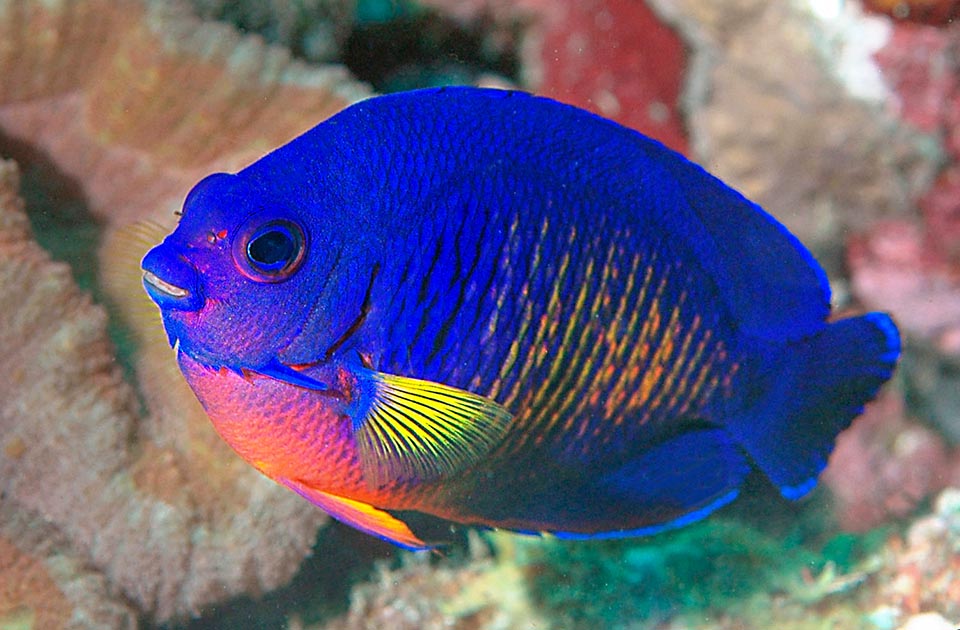 In this specimen predominates the blue that masks most of the stripes, but even the contrary can happen, as shown in the following photos © Benoit Lallement

The mouth, small but with big lips, has several brush-like teeth.

The livery, much variable, is dark in its whole and is very mimetic. 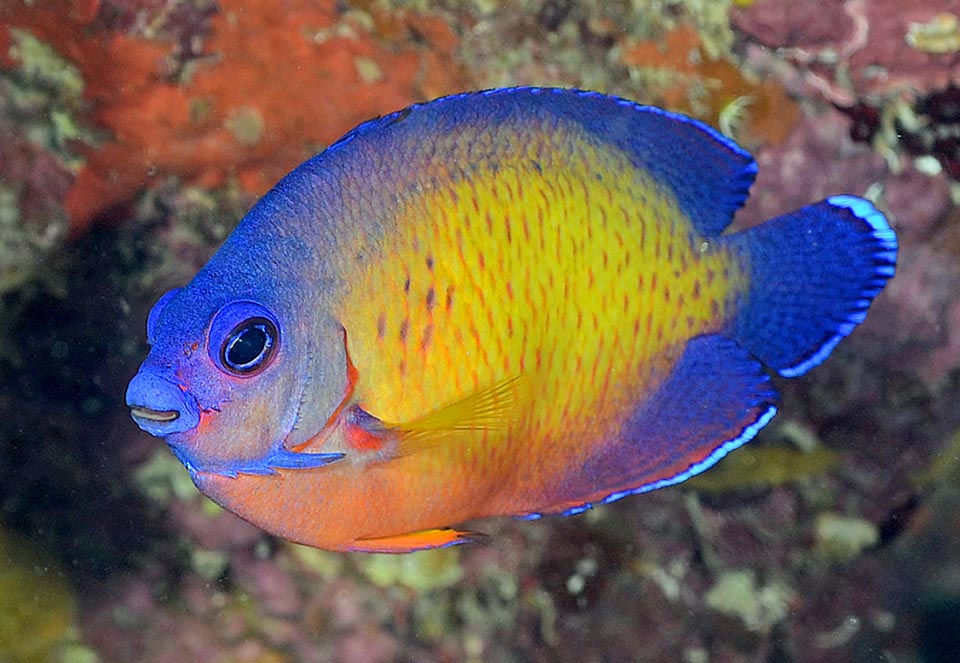 Here we very well note, blue coloured on the light background, the long defensive spine close to operculum that give the name to the species. Centropyge bispinosa is a protogynous hermaphrodite fish: both sexes in fact are present upon birth but female organs develop first and only later on females turn into males © Benoit Lallement

The central part has usually some irregular vertical dark orange stripes on a more or less flaming orange background and more or less restricted by the dark violet blue of the remainder of the body. The margin of the fins is electric blue, as well as the spine of the operculum and the snout, but the ventral fins are orange and the pectoral ones are yellowish. Sometimes, also the vertical stripes are blue, and there are individuals decidedly unusual, wholly blue, orange or yellow.

The specimens living in deep waters, where the habitat colours are less bright, are usually paler. The juveniles, which in the angelfishes have often very different drawings and colours, in this species are, since the beginning, similar to the adults. 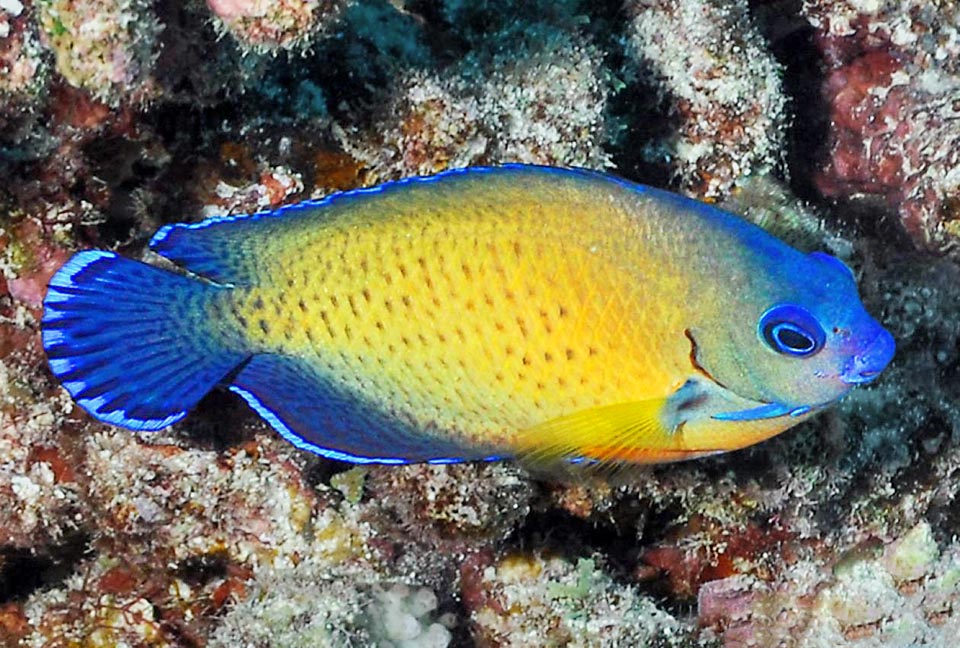 Especially in the reproductive time, some harems form with an alpha male and 3-7 females. The fecundation takes place on the surface. The eggs and the larvae are pelagic © Rick Stuart-Smith, Reef Life Survey

The twospined angelfish nourishes of algae, polyps of madrepores, sponges and ascidians. It is a hermaphrodite protogynous species, that is, with females changing sex while ageing. During the reproductive time, small harems take form with a dominating male and 3-7 females. The fecundation takes place in surface. The eggs and the larvae are pelagic. They live, for three days, of the yolk sac then of plankton, and after a post-larval stage, around the two months, they resemble to the adults. 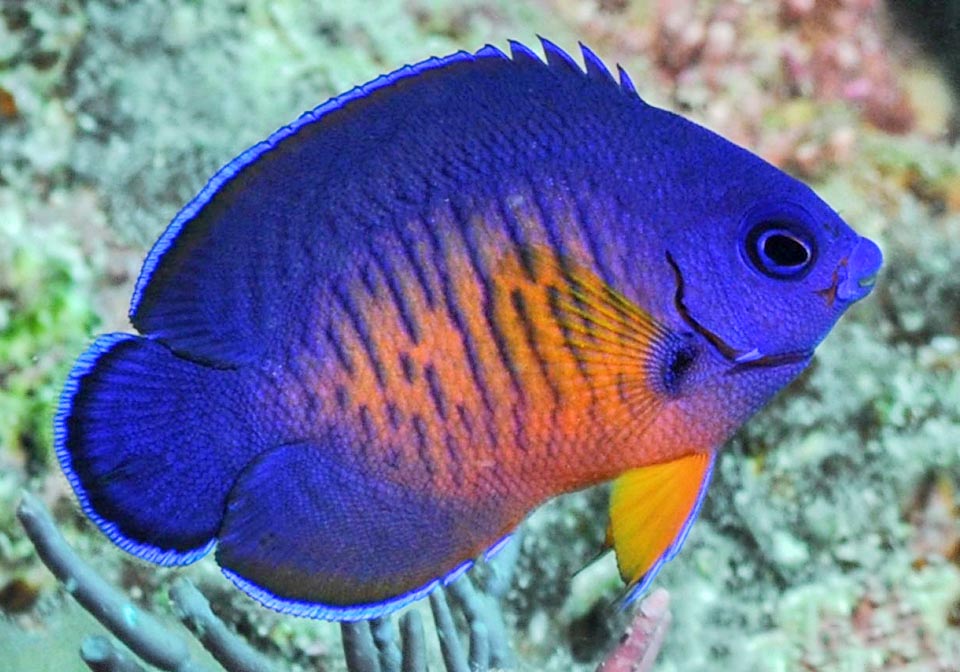 A youth. While other angelfishes have generally a livery very different when young, this already looks like the adults, excepting the roundish shape and the growing spine © Rick Stuart-Smith, Reef Life Survey

The Centropyge bispinosa often hybridizes with Centropyge shepardi and there are nurseries for the aquaria market offering various variants of colour.

In nature, the populations may double in less than 15 months and the fishing vulnerability index of the species stands among the lowest ones: only 10 on a scale of 100.