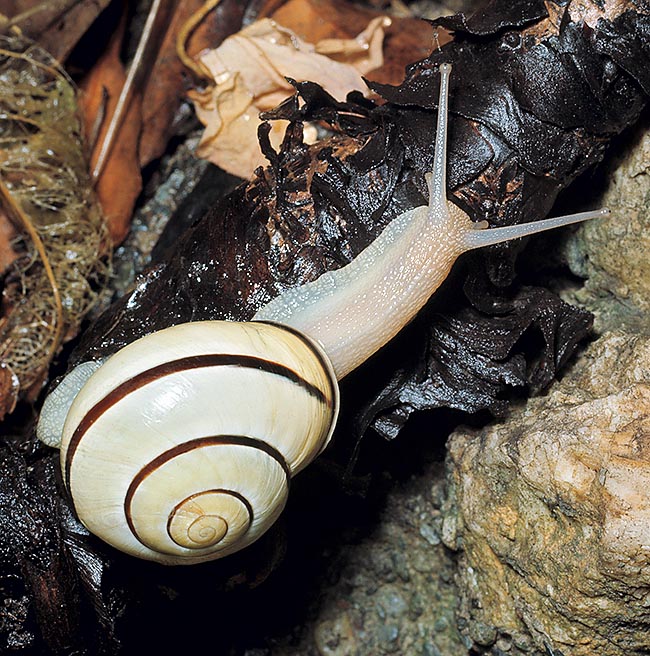 The snails of the European fauna are usually characterized by little showy shells, often of modest size and dull colours; one of the few exceptions is probably represented by Cepaea nemoralis (Linnaeus, 1758) that we could define as the most “tropical” of our terrestrial molluscs, seen that it fairly recalls the unbelievable Caribbean snails of the genus Polymita.

The animal, in fact, usually shows a nice lemon yellow, pink of bright red colour, with shell having the same colouration as background, often crossed by one or more dark brown stripes, at times thin, at times wider.

The overall outcome is therefore very scenographic, especially if we think to the contrast between the colours of the animal and the green of the shrubby vegetation, habitat where this species usually lives.

Not surprisingly, the name of the genus (Cepaea) comes from the Greek “κῆπαιος”, meaning “relevant to the garden”, whilst that of the species (nemoralis) comes from the Latin and means “inhabitant of the woods”.

Cepaea nemoralis belongs to the class Gastropoda, to the subclass Pulmonata, to the well known order of the Stylommatophora and to the family of the Helicidae.

Cepaea nemoralis is found in quite different habitats, natural as well as anthropized, such as gardens, fields, woods, cultivated fields, vineyards, fences, shrubs, enclosure walls and escarpments. Usually frequents fresh and humid places at modest altitudes (lowland and hilly areas); however, it can reach the 1.200 metres of altitude. 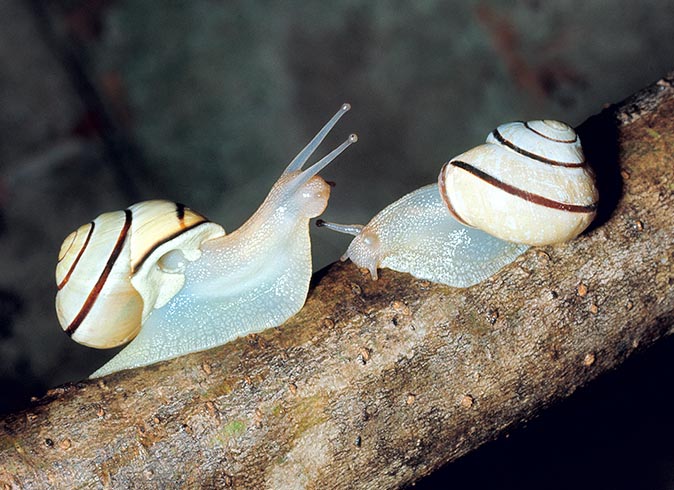 The shell is sub-globose with subconical-depressed spire with diameter generally between 19,5 and 22 mm.

The umbilicus is absent. Ovoid opening decidedly oblique with everted outer lip; the peristome has internally a labial labrum and a callosity on the columellar edge, generally dark brown.

Some specimens can show only the background colouration and do not have brown bands; finally there are also rare albino forms, with wholly de-pigmented conch. The superficial sculpture is formed by thin axial striae, irregular and slightly waved.

In the subspecies Cepaea nemoralis etrusca, which has a much bigger shell, the surface (in particular the last coil of the spire) shows some very marked wrinkles.

It is a medium-sized animal, elongated, almost pointed on the back; long and thin tentacles. Small mouth equipped with great and diverging labial palps. Respiratory opening (pneumostome) oblique and ovoid. Surface of the body covered by small and thickened tubercles. Also the colouration of the mollusc, as briefly said already before, can be very variable: all the tonalities of yellow, pink and orange are in fact possible; finally, also albino specimens are known.

About 1,6 to 2,4 mm wide mandible, equipped with vertical ribs (2 to 9, but usually 3-4), more or less elevated and protruding beyond the borders. Radula formed by a robust central unicuspid tooth; the lateral teeth initially show a rudimental ectocone which later becomes more distinct; the lateral teeth for the outermost rows become neatly tricuspid.

Once again, it is in the genital tract that we detect the most significant diagnostic characters for the distinction between the various species; in particular, in the genus Cepaea, do get great importance the structure of the mucous glands, the dimensions of the diverticulum of the channel of the bursa copulatrix and the shape of the love dart. 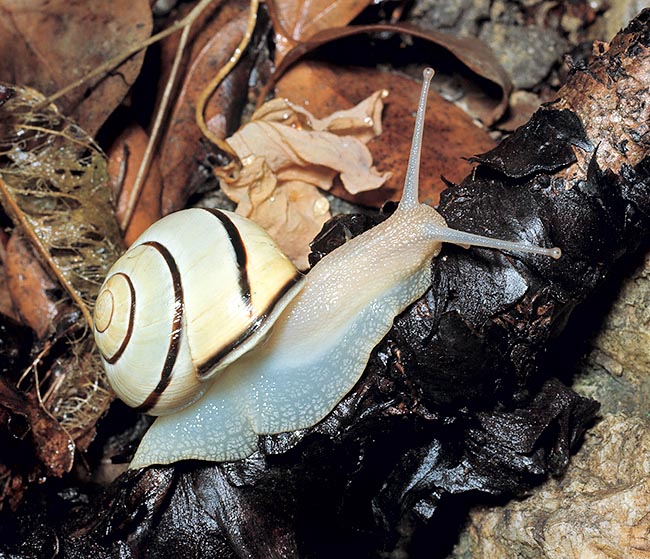 Poorly collected due to the scarce tasteless flesh, hibernates and can live some years © Giuseppe Mazza

In Cepaea nemoralis the mucous glands present a small number of cylindrical caeca (usually 2 to 4) which depart from a short basal trunk.

The channel of the bursa copulatrix has very variable dimensions, even if generally very long (26-51 mm). Its diverticulum is, on the contrary, short or very short. Conversely, the flagellum is always longer (1,7-6 mm) than the penis and of the epiphallus merged. The sack of the love dart is particularly voluminous, enlarged and rounded ahead.

The love dart is shaped like a stylus and is equipped with 4 longitudinal crests, not bifid, two of which (opposite one another) are more protruding than the others.

Cepaea nemoralis can live some years. The activity period goes from spring to autumn; the winter season, on the contrary, is duly spent hibernating.

Cepaea, like all pulmonate gastropod molluscs, is a hermaphrodite (it has masculine as well as feminine reproductive organs) and not sufficient (cannot self-fecundate, but must copulate with a partner).

During the coupling, each individual will cover the double role of inseminator and of fecundated. Also the copula of Cepaea, as in the case of other Helicidae, is preceded by a complex courting ritual; furthermore, also Cepaea recourses to the use of a mineralized love dart in the phases preceding the copula (as happens, for instance, for Helix pomatia ).

The molluscs of the genus Cepaea are edible and are locally collected for eating them; however they are not so much sought for and so much appreciated, as is the case of those of the genus Helix, probably due to the smaller size, perhaps for the less tastiness of their flesh.