The plant is native to central-eastern Mexico (states of Hidalgo and Veracruz), where it grows on rocky-calcareous areas, between the 1.000 and the 1.500 m of altitude, characterized by a mild and dry climate in winter, warm with rare and short rainfalls in summer, with a strong daily temperature range.

The name of the genus is the combination of the Greek word “kephalē” = head and Cereus, name of another genus of Cactaceae, the name of the species is the Latin word “senilis” = of an old, therefore “ Cereus head of an old”, with obvious reference.

The Cephalocereus senilis (Haw.) Pfeiff. (1838) is a columnar, slow growing, plant, usually not ramified, only, in some cases, at the base and rarely in the upper part, with the green-grey epidermis, tending to the grey with the age.

The stems, up to 30 cm of diameter, when in the wild, may reach and exceed the 10 m of height, up to 15 m tall specimens are, in fact, not rare; they have 12-34 ribs about 1 cm tall with little prominent tubercles. 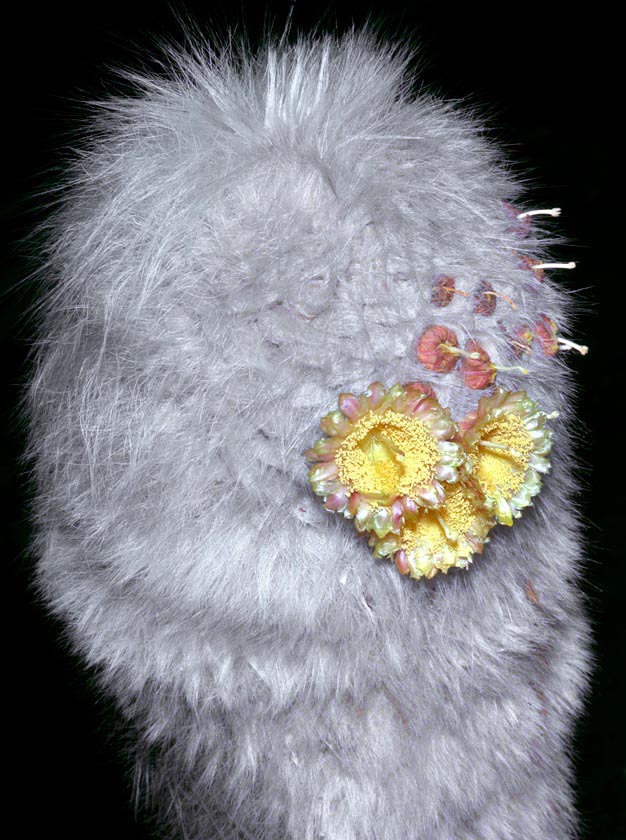 Hoary like an old man, Mexican Cephalocereus senilis is sold in pots, but in nature can exceed the 10 m. The bright night flowers, of about 8 cm of diameter, are pollinated mainly by nectarivorous bats © Giuseppe Mazza

The areoles are close and equipped with 20-30 soft, greyish-white, bristles, 6-12 cm long, but which, in the old plants, may reach and exceed the 20 cm of length, and 1-5 robust central thorns of a yellowish-grey colour, 1-2 cm long in the young plants, even 5 cm in the adult ones.

When, in the wild, the plant reaches an age of 15-20 years, a cephalium begins to develop, on the sides at the beginning, then possibly wrapping all the apex, formed by bristles which are shorter than the previous ones and by a thick very pale brown down, 4-8 cm thick, which is the index of the achievement of the reproductive age.

The funnel-shaped flowers generate from the areoles of the cephalium, are nocturnal, solitary, about 9 cm long and with an 8 cm diameter corolla, of pink colour; the floral tube is covered by sparse scales and down. The flowers are pollinated mainly by nectarivorous bats, such as Leptonycteris curasoae and nivalis, Choeronycteris mexicana and Glossophaga soricina.

The fruits are obovoid, long about 3 cm, pink, with, on top, the dried base of the flower. It mostly reproduces by seed, on a sandy substratum, at a temperature of 20-25° C, less frequently by cutting, which is to be well dried up; at times it is grafted on other more resistant species, such as Trichocereus pachanoi.

In recent years, in order to put a limit to the massive collect of seeds in habitat, which reduces the natural reproduction, they have encouraged the multiplication by micropropagation in vitro, starting from the areoles.

Plant with a timeless charm, by sure one of the most characteristic cultivated cacti; in particular, are much appreciated and commercialized the young plants of not more than ten cm, where the length of the white bristles in comparison with that of the whole plant is more evident. The best locations for the open air cultivation are the rocky or stony grounds, arid or semi-arid, even poor, provided perfectly draining, in full sun and in climates with dry winters and little rainy summers.

The adult plants may stand, completely dry, temperatures of a few degrees under 0° C, the young plants are particularly sensitive to the radical rottenness already when close to the 0° c, especially if in presence of humidity. When in pot, it is to be cultivated in particularly porous and draining topsoil, which may be formed, in equal parts, by common fertilized garden earth, coarse sand and crushed calcareous stone, with the upper layer formed by stone only, in order to limit the risk of rottenness; in winter, it is to be placed in well aerated locations with temperatures possibly around the 10-15° C. Watering in summer must be moderate, allowing the topsoil to dry up completely before irrigating again, when in winter, they are to be stopped. Being easily subjected to attacks by mites, cottony cushion or white scales, it is to be frequently inspected in order to allow a quick intervention, if needed.

Cephalocereus senilis was last modified: May 7th, 2018 by Giuseppe Mazza