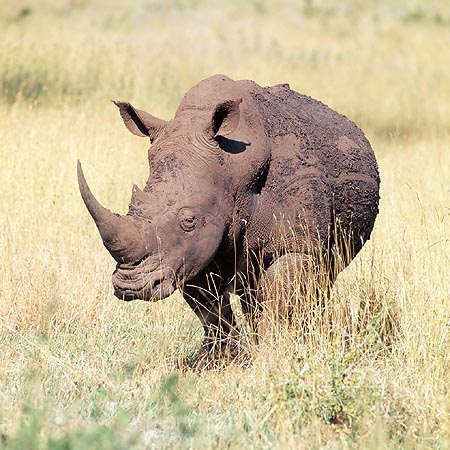 The White or Square-lipped Rhinoceros (Ceratotherium simum Burchell, 1817) is the third greatest terrestrial mammal after the African Elephant (Loxodonta africana), and the Indian Elephant (Elephas maximum).

Usually of quiet nature, they are much less aggressive than the Black Rhinoceros (Diceros bicornis), except if in presence of predators, such as man, lions, and hyenas, which can represent a danger for themselves, or their young lives. In this cases, when reacting, we might say that they take a run. They suddenly hurry away for some tens of metres, in the direction opposite to the danger, stop abruptly, and start again towards the objective with a furious charge.

They usually live in family groups, more stable than the Black Rhinoceros, formed by at least 5-6 units (males, mother with offspring of different generations), with a maximum of 16 specimens, when they join other families with precise hierarchical schemes. Even if not fully proved, it looks like that they are less promiscuous than the Diceros bicornis, and like this one, they live, on an average, for 30 years.

Another phenomenon, studied since several years, but of which not much is told, is the superimpositions of the settling areas of the rhinoceroses and those of the African elephants, even if it is mainly matter of temporary encounters, as the last ones are much less settlers.

Such encounters can be without any outcome, when everyone ignores the other, or cause violent clashes, as often happens, if a group of African elephants (male, female and offspring), passes through an area occupied by a group of Rhinoceroses, where a dominant male is present. The violent fight between these colossi of the African savannas and grasslands, ends often with the death of the rhinoceros, because a Loxodonta africana can easily reach the 6-6 metres of height at the withers, with a weight of 6-7 tons!

Some zoologist biologists, like Dr. W. Khume, savant of the elephants’ ethology, have advanced the hypothesis that, like the variable sequence of the elephants’ ears fluttering is not only a mechanism for dispersing the body heat (mostly of the head), but also a language by means of which they express aggressiveness or recognition of the partner or the offspring, something of similar occurs also in the rhinoceroses.

It is thought, but not all are in agreement, that the number of times in which a rhinoceros lowers or lifts its head, as well as the utilization of the bigger horn for the contact with the progeny, are clear ethologic codes for a signalling scheme. 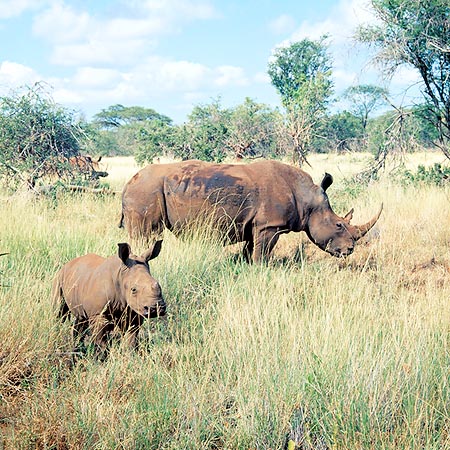 The White rhinoceros reaches the weight of 5 tons, the length up to 5 m, and a height at the Withers of 2 m. It has an elongated and compact skull, with short and robust neck. Small, lance-shaped ears, small lateral eyes with eyelids. Weak eyesight (they are short-sighted), sense of smell developed as well as hearing, taste and touch. Its upper lip is typically squared, wide up to 20-25 cm, very useful for the alimentation, as is useful for grasping easily the blades of grass, which form its main source of food. It is utilized in the Flehmen response during the coupling by the male (with a turning up of the upper lip as receptivity response of the female in oestrum), and by the females as recognition of the puppy, as written in the Diceros bicornis article.

The skin if often thick, wrinkly, without particular characterizing folds. The colour is pale grey, not white (also the Black Rhinoceros is anyway dark grey, not black), as the name says, this comes probably from an erroneous translation made in ‘800 by the English of the Boer name “wijde” (pronounced: uàid), meaning with (superior) big lip, erroneously translated as white. The White Rhinoceros has a couple of uneven keratinous horns. The bigger one, which is placed in front, over the upper lip, can reach the length of a metre and a half! Also this species, therefore, rubs the horns against rocks, trying to set a limit to their growth. The males are always bigger than the females. The two species of African rhinoceroses have heterodont dentition (many types of teeth with different morphology), with strong regression or disappearance of the incisors and superior and inferior caninnes. Both canines and incisors are present in the two mandibular arches in the three Asiatic species which always have heterodont dentition.

The males have a genital organ, formed by two internal testicles and a complete penis, turned in opposite direction. The female is always characterized by single deliveries. At birth, the new-born can weigh even 70 kg, needs a little more time before starting to walk than its likes belonging to the genus Diceros , about after a couple of hours of post-birth life. They have the tendency to suckle till when 1-2 years old. The physiology of the delivery and the anatomy of the reproductive system is equivalent to the one of the Diceros bicornis. The males reach the sexual maturity by around the fifth year of life, the females around the third. While courting the female in oestrum, which they recognize by tasting the spread urine, the males, if in presence of competitors, engage violent fights. They mark their territory with urine and faeces, folding also shrubs, as optical signals. They tend to nourish during the cooler hours, sunset, late afternoon, dawn.