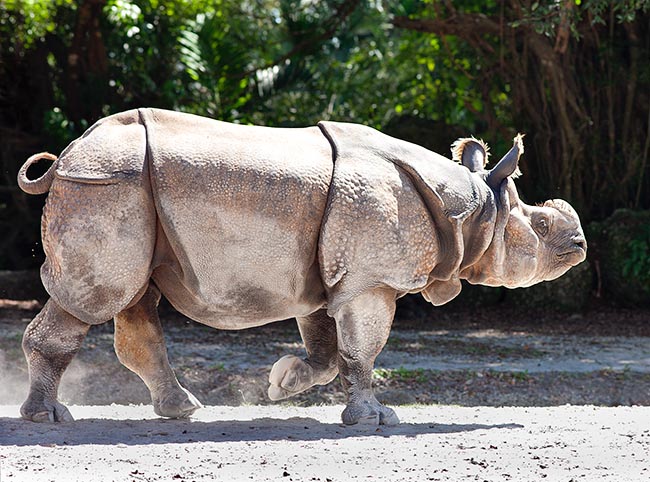 With 800 units only, Rhinoceros unicornis is the largest Asian rhino © Giuseppe Mazza

The Indian rhinoceros (Rhinoceros unicornis Linnaeus, 1758) is a placental, eutherian, quadrupedal pachyderm afferent to the class of the Mammals (Mammalia), order of Perissodactyls (Perissodactyla), to the well known family of the Rhinocerontids (Rhinocerotidae) and to the genus Rhinoceros. The family of the rhinoceroses contains five living species, subdivided in four genera living in south-eastern Asia, in Burma, in Malaysia, in some regions of India and in most of Africa south to the Sahara.

Even if their common image is that of stocky, heavy and very sturdy animals, actually, the rhinoceroses can move with surprising speed and agility when it is necessary.

In general terms, in the rhinoceroses the fore paws have three or four toes, the back ones three, each one with a small hoof similar to a nail in front and to a sole back. The skin is very thick with sparse hairs: the horns (two, like in the African species, or one in the Indian rhinoceros), are exclusively dermal, placed over a thickening of the nasal bones and also of the frontal ones in those species holding two of them. 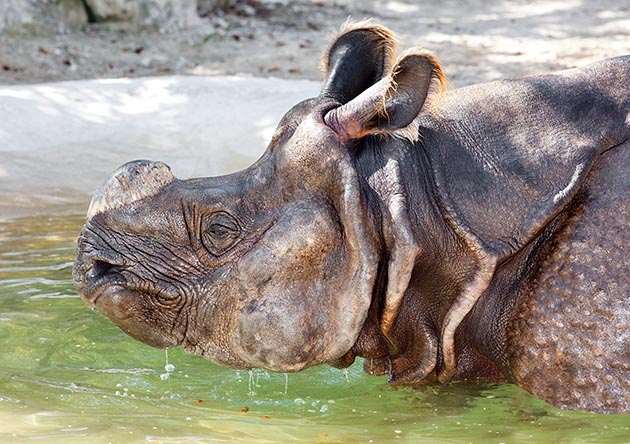 Lives alone. The horn is short and blunt. Loves water and spends the warm hours in ponds © Giuseppe Mazza

The horn consists in a mass of corneous fibres agglutinated with keratinous material, but the fibres are not real hairs as they form from skin papillae and not from piliferous follicles.

The rhinoceroses are animals mainly nocturnal and solitary; although massive and seemingly invulnerable, they are extraordinarily shy, even if the African Black rhinoceros (Diceros bicornis), if alarmed, almost always charges blindly. The Asian species nowadays are unluckily rare (also the African ones are meeting the same destiny), as their number has been reduced by the usual “stupid and unnecessary” excessive game hunting, by the destruction of their habitats due to the human settlements and by the hunting done for getting the horns, which have been always much appreciated in the East for their alleged (but not true) aphrodisiac qualities, once reduced in powder and manipulated for preparing a drug.

Three species live in Asia: the Indian rhinoceros (Rhinoceros unicornis, object of this text), the Javan rhinoceros (Rhinoceros sondaicus) and the Sumatran rhinoceros (Dicerorhinus sumatrensis). Their numerical reduction was dramatically documented in the geographic maps published since 1960 by the biologist L.M. Talbot, where their distribution one century ago was shown by a dash covering thousands of square kilometres, whilst in 1960 by a few scattered points; nowadays, some biologists advance the hypothesis that some species are even extinct. 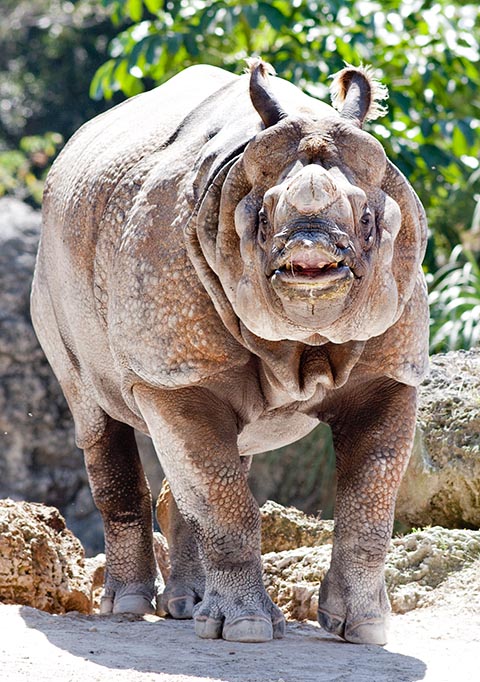 Doesn't attack with its horn, but with big mandible canines, slant and sharp © Mazza

The Indian rhinoceros once lived in a vast zone of northern India and in Nepal, from the foothills of Hindu Kush to the boundary with Burma.

Today, it lives in eight reserves in India, five of which are located in Assam (a state of north-eastern India) and in the National Park placed in the valley of the Rapti in Nepal.

About 400 specimens are present in the first and little less in the second one, for a total which does not reach the 800 specimens.

For this reason, the IUCN today establishes its status as “vulnerable”.

In Assam, the rhinoceroses live in the swampy countries, with thick clumps of giant grasses, whilst the biologist E.P. Gee has found that in Nepal, during the cold months, they do live mainly in the thickets with trees and in the forests. In Assam, they nourish of grass, twigs and reeds, both day and night. They are solitary and spend most of their time in the bogs, especially when it’s hot.

They come always back to the same place to defecate and accumulate vast mounds of dung. They are not strictly territorial, even if it does not seem that they move a lot outside from the zone where they usually live.

The biologist Talbot found that in a same marshland lived five Indian rhinoceroses. Some were going around in the zone and the choice of the latrines seems quite casual, depending on which at a given time appeared to be the nearest. These accumulations of dung are remarkable formations: some measure more than 4,5 m of length and are up to 1,2 m tall.

On the other hand, the zoological biologists Hutchinson and Ripley have stated in a text written in 1954 that Rhinoceros unicornis is a solitary animal, living in well defined territories most of the year, whilst it wanders around within a wider range during the reproductive season. The two zoological biologists have also supposed that the territory should be placed around a pond or a bog and that there should be a mound of dung at the centre and minor mounds at the margins, quite a more limited picture than the one found by Talbot. 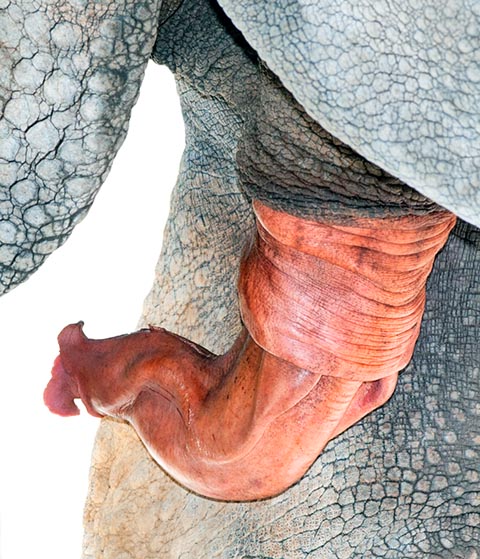 Rhinos' testicles are internal and the penis faces back © Giuseppe Mazza

The Indian rhinoceros is the largest Asian species; it reaches 1,8 m at the withers, the 4,20 m of length and the 2 t of weight.

Both male and female have one only horn, which may be 80 cm long. The livery is grey; the skin often originates a heavy fold, over the hindquarters as well as the fore ones, whereby they appear to be the plates of an armour, a resemblance which is made even more realistic by the presence of roundish protuberances, similar to warts looking like bolts.

In the natural reserves where, since years, they are not disturbed, the animals do not have fear and are indifferent to the closeness of man. But in Nepal, where they have been always killed and taken away from the cultivated areas, the biologist Gee observed that “They are nervous, scared for the view of the human beings and are almost exclusively nocturnal”.

In the Kaziranga National Park in Assam, Talbot observed that some old rhinoceroses lived out from the park southwards, close to the rice fields.

The biologist cited “Instead of being dangerous solitaries, these animals have become extremely docile, paying very little attention to the cattle or to the native life taking place around them.

Extremely rare are the instances where the rhinoceroses have engaged in insane and furious races causing damages or destructions”.

On the other hand, a female with calf, if disturbed, will furiously attack. A particular thing is that this species, when attacking, does not use the horn, which is rather blunt, but some canines, very sharp, large and slanted, of the mandible: in the jaw, there is only one big incisor but no canines and in the mandible there is only one small incisor. 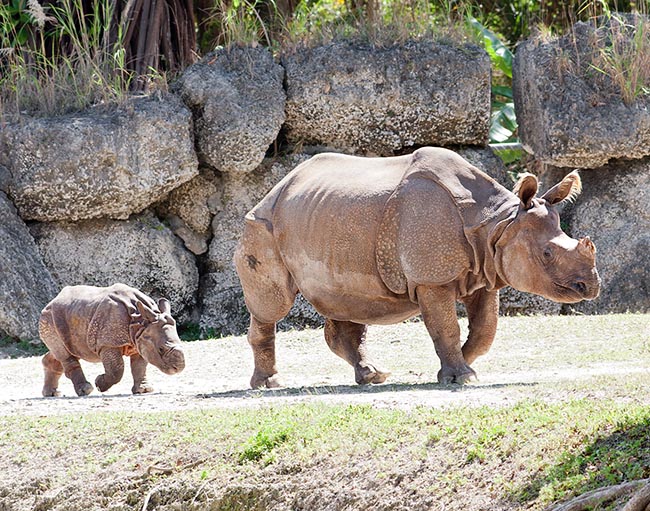 While utilizing the inferior canines, the animal moves its head upwards and hits the victim.

Talbot has seen an Asian elephant (Elephas maximus) being scarred n this way up to a height of two metres over the ground. But then it retaliated and killed the rhino by crushing.

The gestation is very long, as an average, 15-18 months, with an interval between the pregnancies varying from the 33 to the 50 months of life.

The deliveries are single and the calf can remain with the mother for two and a half years, till when another one comes to life.

When a female is in oestrum, two males may ferociously struggle for coupling with her.