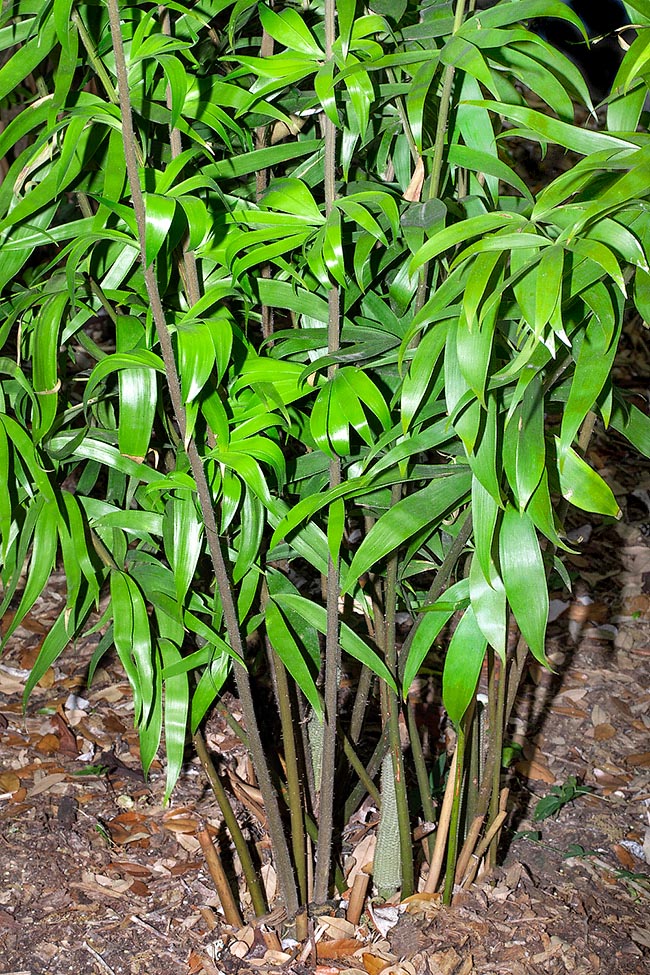 Native to Mexico, the Ceratozamia hildae has an initially underground stem, of globose or subcylindrical shape that with the time can reach 20 cm. It has even 20 leaves, 1-1,8 m long, with petioles similar to bamboo, and rachides with leaflets progressively united in 3 or 6 elements nosegays, overlapped and spirally arranged © Giuseppe Mazza

The Ceratozamia hildae G.P. Landry & K.L. Wilson (1979) is a species native to Mexico, state of Querétaro, region of Huasteca Potosina, close to the Santa María River.

It grows among calcareous rocks in forests of oaks and pines, at altitudes varying from 300 to 900 m above the sea level.

We find it on heavy soils, formed by black clay, at times together with Dioon edule or in association with palms of the genus Brahea, whilst in other areas it grows with Ceratozamia latifolia and Zamia vazquezii.

It stands among the most valuable American cycads. We owe its discovery to Antonio Martinez, a nursery man in San Luis Potosí, Mexico, and has been introduced for the first time in the USA in 1960 by a Texan collector getting at once a major appreciation.

The name of the genus comes from the Greek “κέρας, -ατοϛ” (céras, cératos) = horns and “ἀζαίνω” (azaíno) or “ἀζάνω” (azáno) = pine cone, with reference to the characteristic reproductive structures that display sporophylls surmounted by two protuberances (horns), and strobili reminding those of the conifers: the specific name hildae honours Hilda Guerra Walker, daughter of the collector Luciano Guerra who first collected this plant. Ceratozamia hildae was formally nominated only in 1979.

Because of its look and the disposition of its leaflets, Ceratozamia hildae is known also under the English term “Bamboo cycad” or “Pata de gallo” in Spanish.

It is a plant having very low stem, acaulescent, globose or subcylindrical, that may reach the 10-20 cm, with a diametre that usually does not exceed the 25 cm.

The stem, protected by old withered foliar bases, persistent and coriaceous, grows underground for several years, before emerging and may produce lateral bulbils that in the very old specimens may reach the dimensions of the primary trunk.

The Ceratozamia hildae can carry also a crown of 20 leaves, that, when emerging, have a bronze colour. Red brown or greenish. 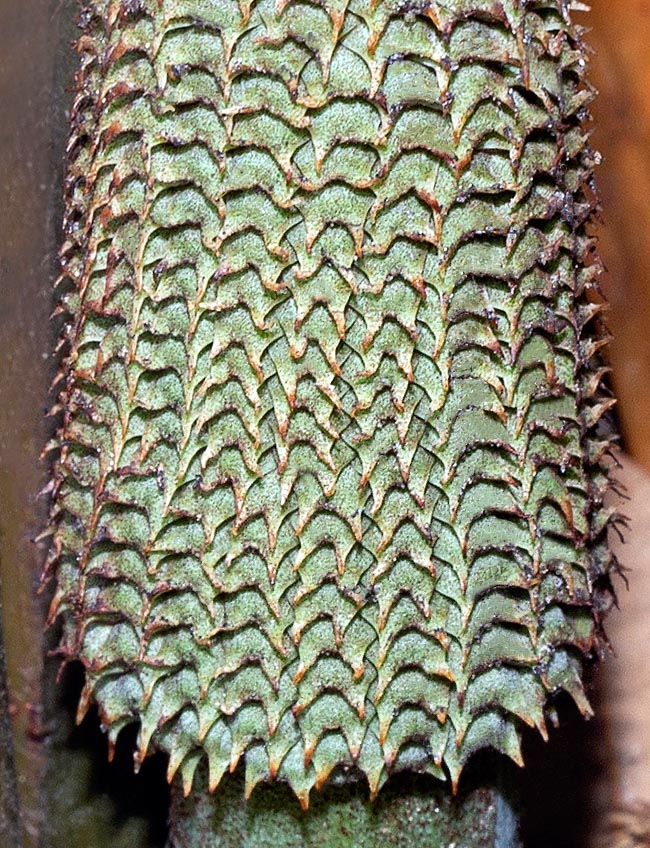 Enlarged detail of a male cone. We note the microsporophylls with the horn shaped protuberances that have originated, from the Greek “céras, cératos” = horns, the name of the genus Ceratozamia © Giuseppe Mazza

The rachis of the adult leaves, that is the part bearing the leaflets, tends to twist slightly near the apex and at times bends back, downwards. The leaves reach 1-1,8 m of length, petiole included, woolly at the base and armed with spines 30-40 cm long. On the rachis we can count 20-50 leaflets, 7-22 cm long and 1-5 cm broad, lanceolate, asymmetric, wider beyond the half, falcate, that place themselves along the rachis in groups of 3 to 6. They are of pale green colour on the upper page and silvery below, with linear veins, smooth margins and acute apex.

Usually, in the genus Ceratozamia the young leaflets grow in position opposite on the rachis, but the species hildae distinguishes because they appear progressively united in small bunches, of three to six, overlapped and spirally arranged.

Ceratozamia hildae is a dioecious species, that means counting male and female plants.

The male cones, fusiform-cylindrical, are 18-25 cm long and 2-3 cm broad, initially yellow-green and then brown when ripe; microsporophylls with two small protuberances (horns) 3 mm long and a 9-15 cm long peduncle, with 5-7 mm of diametre, slightly tomentose.

The female cones, are 10-14 cm long, 3-5 cm broad, and have a shape from ovoid-cylindrical to cylindrical, colour from yellow-green to olive green, veiled brown tomentum and mucronate apex; an about 9 cm long peduncle and megasporophylls with two big horns, separated by an oval and prominent protrusion. The single pollinated seeds produce up to 40 seeds. The sarcotesta (the outer fleshy part of the tegument of the seed), globose with smooth surface, flattened and slightly trilateral, 18-24 cm long and 13-18 mm broad, of pale brown colour.

In nature the cones of both sexes emerge usually from February to April. The pollination may occur from mid April to early June and the maturation of the seed requires about nine months. 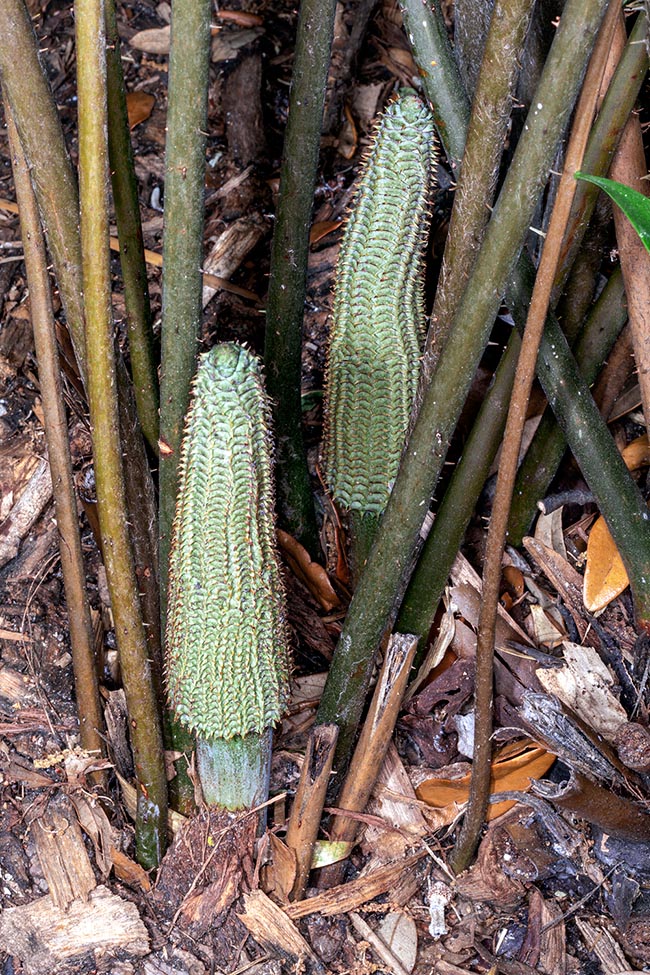 The male cones, 18-25 cm long and 2-3 cm broad, sprout in nature, as the females ones, between February and April © Giuseppe Mazza

In cultivation is necessary the artificial pollination, as the pollinating insects are not present. Every year, the cones that have been pollinated in April and May, begin to disintegrate in November and the seeds mature by December. In conditions of tropical climate or of protected cultivation we can get a good production of seeds.

The propagation of Ceratozamia hildae is normally done by seed. The yellowish pulp covering the seeds rots quickly, rather than to dry up, and once the seeds have been released from the cone, they may be collected and easily cleaned up. Sown, they germinate within about three months.

The sowing is done in a little deep container, with a light covering of sand and, after the germination, the plantlets must be transplanted in pots prepared with light substratum and placed in a shady position.

Occasionally the old plants generate suckers around the base of the stem. These can be taken off when they are in a dormant status and already in possession of independent roots.

Before taking them off we must pay attention to remove the leaves in order to reduce the dehydration.

The advantage of the multiplication with bulbils is the certainty to know the sex of the young plantlet, as it will be the same as the mother plant from which we have taken it. Conversely, in case of sowing, we have to wait for years before that the plant produces a cone in order to determine its sex.

The Ceratozamia hildae is easily cultivable as pot or garden plant, in areas suitable on the climate point of view, even if it is extraordinarily cold-resistant. And the plants can survive at conditions of -9 °C for short periods of time, and resist to temperatures well under the -1 °C for long time. Paradoxically, the small plants seem to be more tolerant to intense cold than the big old specimens. The plant tolerates a full sun exposition, even if the quantity of light seems to affect the total length of the leaves.

For the cultivation the young plantlets need a neutral or slightly alkaline sandy substratum, well drained and deep and they take advantage of a good mulching with organic materials (bark or decayed leaves). 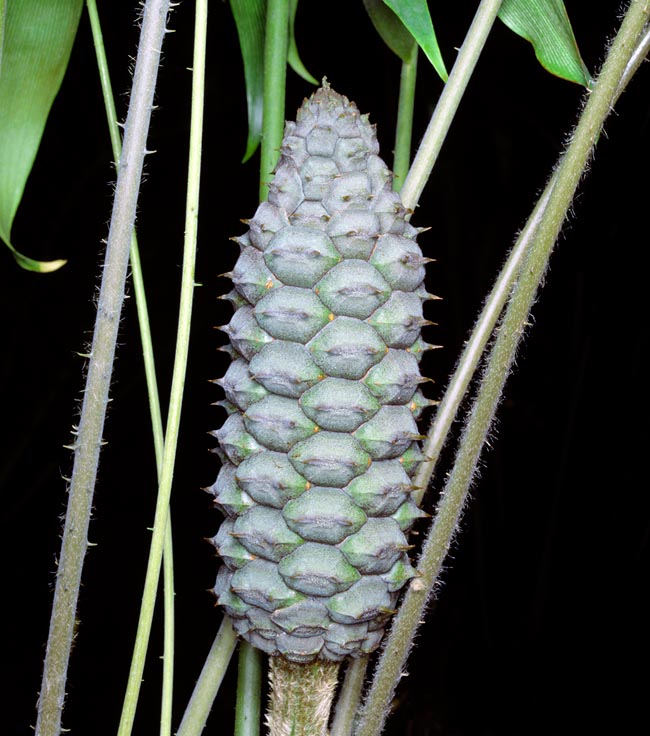 Female cones are shorter and wider than the male ones. In cultivation, for lack of pollinators, are hand pollinated. The seeds maturation requires about 9 months and germination occurs 3 months after sowing. Possible reproduction also through stem suckers. Good resistance to cold. Easy cultivation but leaves and fruits are very poisonous © Giuseppe Mazza

For the administration of fertilizer its is better to wait for the beginning of the vegetation, when the central bud begins to get evident.

In a garden, various specimens cultivated together allow to realize a luxuriant tropical look.

All parts of the plant are poisonous for the animals as well as for the humans. The toxicity causes liver and kidney failure, as well as possible paralysis that occurs quickly.

A specific antidote against the poisoning is not known.

The poison is particularly present in the fleshy seeds and in the leaves. It is necessary to keep far from the plants the pets, and it is a good habit to teach the kids not to eat or chew for fun vegetable materials not authorized by the parents.

Due to the small size and its exotic beauty, Ceratozamia hildae has quickly become subject of commercial request.

Its popularity has almost determined its extinction in nature. Thousands of these small cycads have been uprooted and transferred in various countries, but despite all, the request has not decreased.

It is therefore an endangered species and it has been inserted in the Appendix I of the CITES (Convention on International Trade of Endangered Species) and its international trade is forbidden.