The Ceratozamia kuesteriana Regel (1857) is a species endemic to Mexico, where it grows in the southern state of Tamaulipas, along the Sierra Madre Oriental at Ocampo, at an altitude of about 1000-1800 metres above the sea level. The plants thrive in pluvial forests, among calcareous rocks, in inaccessible areas, along steep slopes. The precipitations have an average of 1000 mm per year and take place mainly in summer.

This species has decreased dramatically because of the indiscriminate collection of plants during the last 250 years, and more recently, due to the colonization of new lands for the local agriculture.

The name of the genus comes from the Greek “κέρας, -ατοϛ” (céras, cératos) = horns and “ἀζαίνω” (azaíno) or “ἀζάνω” (azáno) = pine cone, with reference to the characteristic reproductive structures that display sporophylls surmounted by two protuberances (horns), and strobili that recall those of the conifers; the specific name kuesteriana honours the memory of the baron Karl von Kuester (1820-1893), director of the Saint Petersburg Botanical Garden. 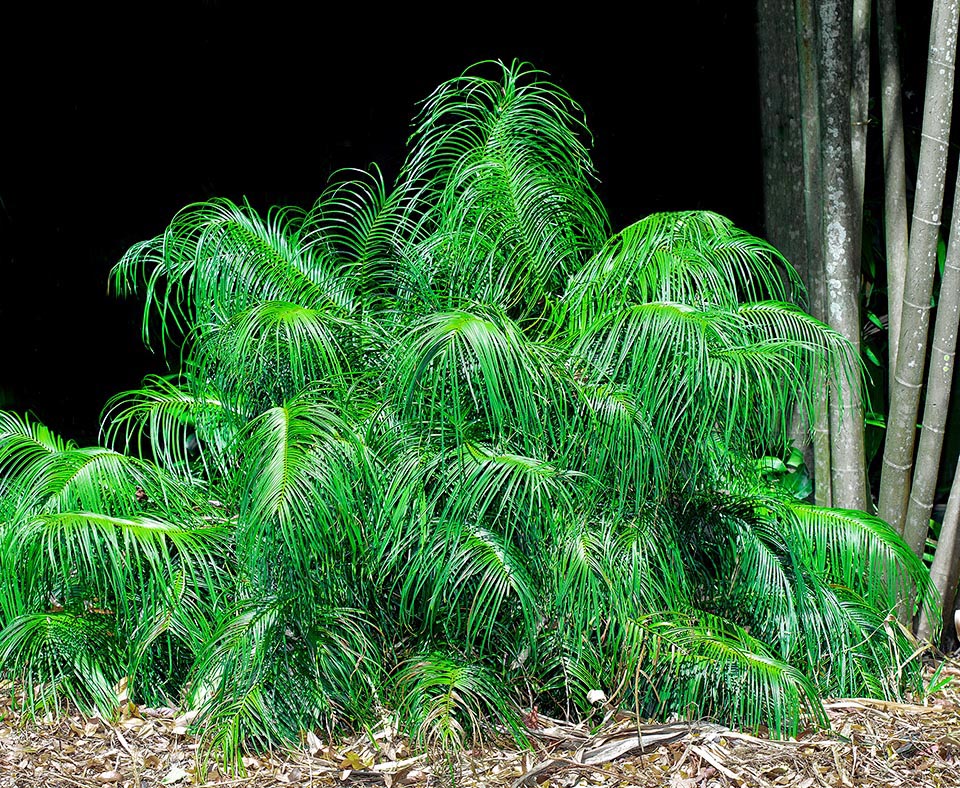 Endemic to Mexico, the Ceratozamia kuesteriana has a 10-20 cm only stem but can carry even a twenty leaves, 80-180 cm long, very decorative © Giuseppe Mazza

Ceratozamia kuesteriana is an almost acaulescent plant, with small stem, rather globose, that may emerge above ground for about 10-20 cm and with a diameter of about 9-13 cm. The small stem is covered by the old foliar bases, that form a persistent protection. The crown is usually formed by 6-20 leaves, erect, 80-180 cm long, with a 17,5-30 cm petiole and a diameter of 6-8 mm. The rachis counts about 30-50 pairs of leaflets uniformly arranged on only one level.

The young leaves, when emerging, have a nice bronze colour and are soft to the touch, and then, with the time, assume an intense green colour and a greater stiffness; usually they are opposite, never grouped, linear-lanceolate, semi-falcate, 20-30 cm long and 6-15 mm broad. The upper page of the leaflets is dark green, with marked concavity, whilst the lower one is paler.

Ceratozamia kuesteriana is a dioecious species, which means that there are, as is the case for all Zamiaceae, male plants and female ones. The dark brown male cone, glabrous, rather ovoid-cylindrical, erect, solitary, 22-30 cm long, with a diameter of 2,5-3 cm, is slightly tomentose with mucronate apex. 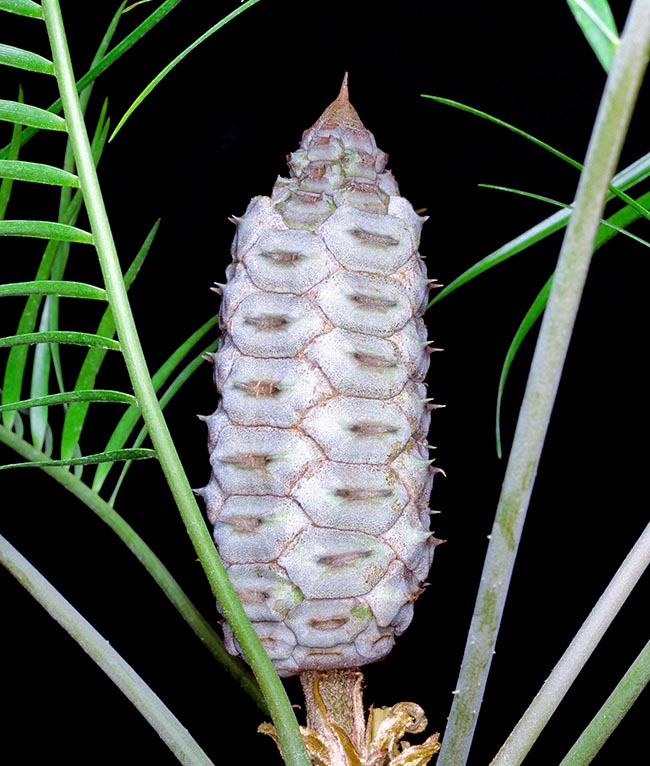 Female cone close-up. Species endangered in nature, where it grows in altitude pluvial forests 1000-1800 m above the sea level, is very appreciated in cultivation by the landscapers due to its good tolerance to cold and direct sun © Giuseppe Mazza

Petiole without spines, woolly, 9 to 15 cm long, with a diameter of about 1-1,3 cm. 8-11 mm long sporophylls, with two short horns, linked by a transversal crest.

The olive green female cone, with greyish or dark brown shades, presents an ovoid-cylindrical form and a 13,5 to 20 cm length, with a 6,5-8 cm diameter, supported by a 12,5-15 cm petiole. Sporophylls 2-2,3 cm long, and connected by a more or less straight transversal crest, 10-13 mm long.

The seeds have an ovoid shape, are 16-21 mm long and 12-16 mm broad. The sarcotesta (the outer fleshy part of the tegument of the seed) has a cream colour, but in the advanced ripening phase assumes a dark brown colour.

Ceratozamia kuesteriana is a modestly sized species, but with an elegant posture due to the long and supple branches. This characteristic renders it very much appreciated by the landscapers in the realization of gardens, even if it grows rather slowly. It prefers a semi-shady position and tolerates also the low temperatures.

Unlike most of the other Ceratozamia, finally resists well, usually, without getting burnt, the direct exposition of the sun rays.

The species has been nominated in 1857 by the Russian botanist baron Eduard August von Regel (1815-1892), of German origin, describing a plant of the collection present in the Botanical Garden of St. Petersburg.

Of Ceratozamia kuesteriana, after the description of Eduard August von Regel, there were no more news during the following years. In 1965 a collector of plants of Texas, Luciano E. Guerra, defined a Ceratozamia not identified with the name of “Rancho del Cielo”. In 1981 the botanists Aldo Moretti, Sergio Sabato and Mario Vézquez-Torres, ascertained the similarity of this cycad with several specimens they collected in Mexico. The verification allowed the correct identification pf the plants like Ceratozamia kuesteriana.

The IUCN Red List classifies Ceratozamia kuesteriana as a species in danger and under risk of extinction (Critically Endangered) that forbids its trade.