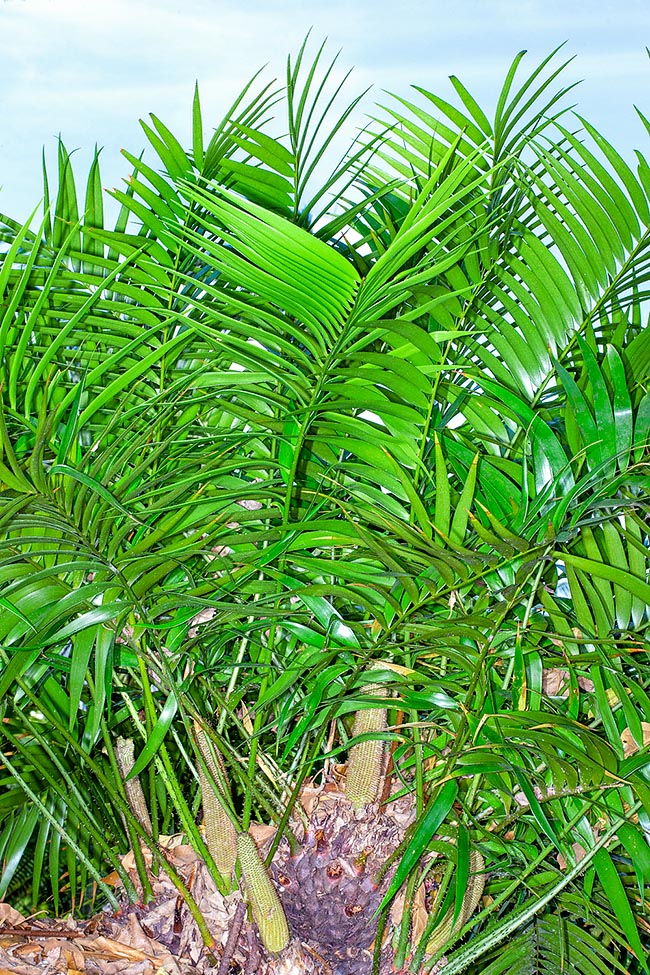 The Ceratozamia mexicana Brongniart (1846) is a species native to eastern Mexico (Veracruz) north-east of Xalapa, where it grows diffusely among the humid woods, having an average summer rainfall of 2000 mm, of the mountainous areas, up to more than 1500 metres of altitude.

It has been named by Adolphe Theodore Brongniart in 1846, while he was busy in the taxonomy describing the genus Ceratozamia.

As site of localization was indicated Mexico, but the pictures and the botanic drawings leave little doubt on the fact that these are common species found near Xalapa, Veracruz, Mexico.

In 1846 Veracruz was the main sea port on the coast of the Gulf of Mexico, therefore many European botanists used it as starting point for their scientific expeditions.

The habitat of the Ceratozamia near Xalapa was at only two days on horseback from the port of Veracruz.

Its taxanomy is still studied by the botanists. Presentle a certain number of forms are grouped in the species mexicana, and it is not excluded that from further studies may emerge elements to define new taxa.

The name of the genus comes from the Greek “κέρας, -ατοϛ” (céras, cératos) = horns and “ἀζαίνω” (azaíno) or “ἀζάνω” (azáno) = pine cone with reference to the reproductive structures that show sporophylls surmounted by two protuberances (horns), and strobiles that recall those of the conifers; the specific name, that means “of Mexico” in Latin, evidences its site of origin.

The Ceratozamia mexicana has a usually short trunk, in any case less than one metre, but displays a nice crown of more than two metres long, graciously arcuate, formed by 40-50 dark green and glossy leaflets, paler on the lower page, mainly opposite, of usually linear shape, 30-50 cm long and 10-20 mm broad, thin and with pointed apices. 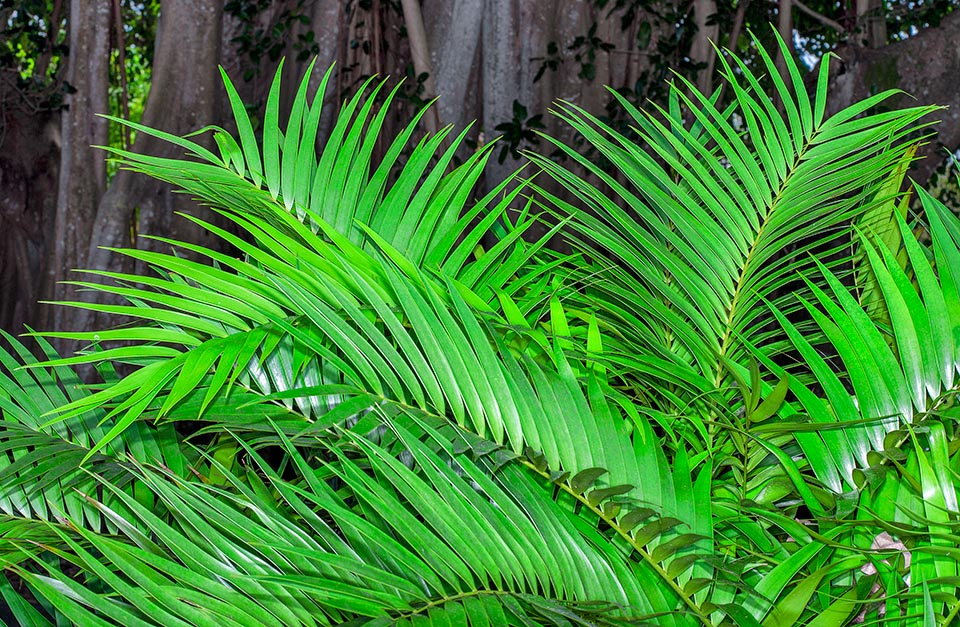 It has a splendid crown of prettily arcuate leaves, more than 2 m long, formed by 40-50 leaflets of glossy intense green colour © Giuseppe Mazza

The male cones are solitary, about 30-40 cm long, cylindrical, of 7-8 cm of diametre, green, with slightly obtuse apex. 7,5-10 cm long peduncle of 2,5 cmm of diametre, with pale brown and tomentose surface.

The microsporophylls are 6 mm long and 15-17 mm broad, always bicornuate, with about 3 mm protrusions. The sporangium, before the dispersion of the pollen, tends to elongate and to bend. 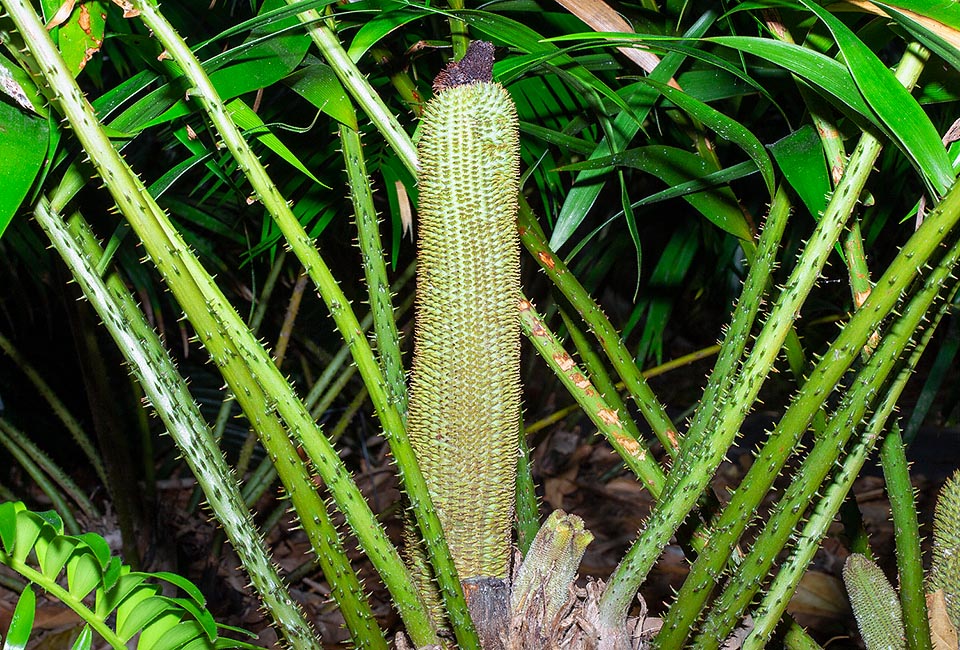 The male cone reaches the length of 40 cm with 7-8 cm of diametre. The foliar petioles are very spiny, especially at the base © Giuseppe Mazza

The long peduncles of  6-10 cm may have 2 cm of diametre. The sporophylls are 18-25 mm long and 27-35 mm broad, the central portion is blackish, whilst the outer border is grey white, tomentum. 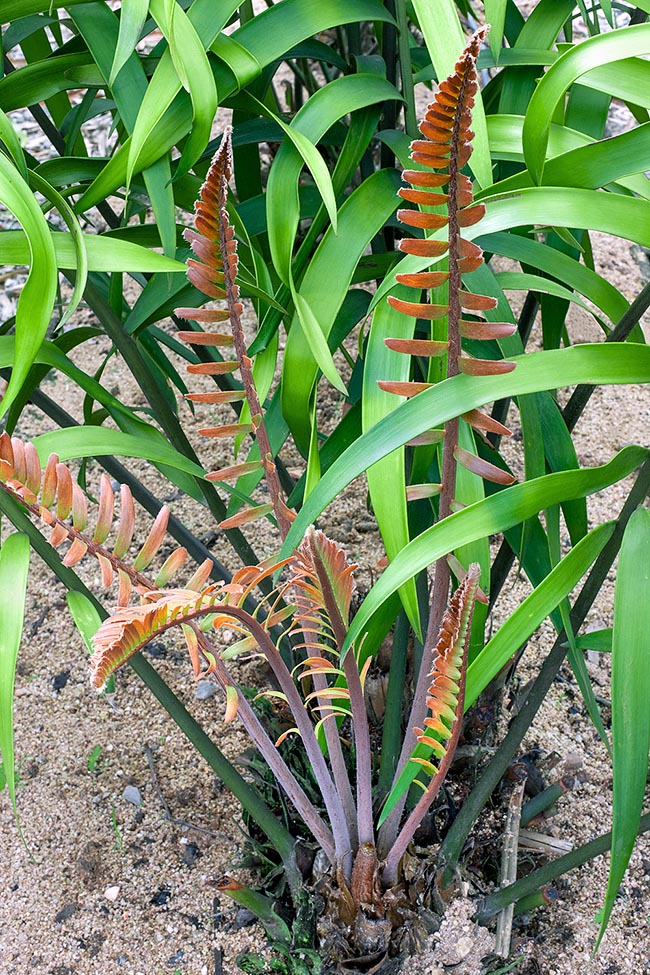 Young growing leaves. We note that already in this phase the reddish brown leaflets are mostly opposite © G. Mazza

At the maturation the seed coat (the outer fleshy part of the seed tegument) appears initially whitish, with brown tomentum, to become dark when falling on the soil.

It is formed by a thick cuticle, rich in tannin cells and mucilages.

It is of pale brown colour, more or less smooth, excepting some little deep longitudinal grooves.

The Ceratozamia mexicana is present in many botanical gardens of the tropics.

Easy to cultivate, it reproduces and grows quickly from the seeds, even if these, unluckily, are not easy to be found.

The capacity to develop in conditions of low light renders it even one of the Zamiaceae preferred by the collectors for the interiors decoration.

It may be inserted as house-plant and thrives with low light and dry atmosphere.

The only sensitive factor are the leaflets, that are rigid and can easily detach from rachis due to accidental impacts.

It is advisable a basically humid substratum of cultivation, with a good organic substance and very good drainage.

Moderate administrations of fertilizer during the warmest months of the vegetative season will keep dark green and glossy the foliage.

The Ceratozamia mexicana is frost resistant species and does not display any foliar damage at few degrees below zero.

It suffers from the strong wind, as the same tends to cause damage to its frail leaflets.

The presence of the Ceratozamia mexicana has been seriously reduced by the middle of the sixties. Its habitat is destined to the cultivation of coffee and bananas and vast areas have been cleared in order to grant room to these industrial cultivations. 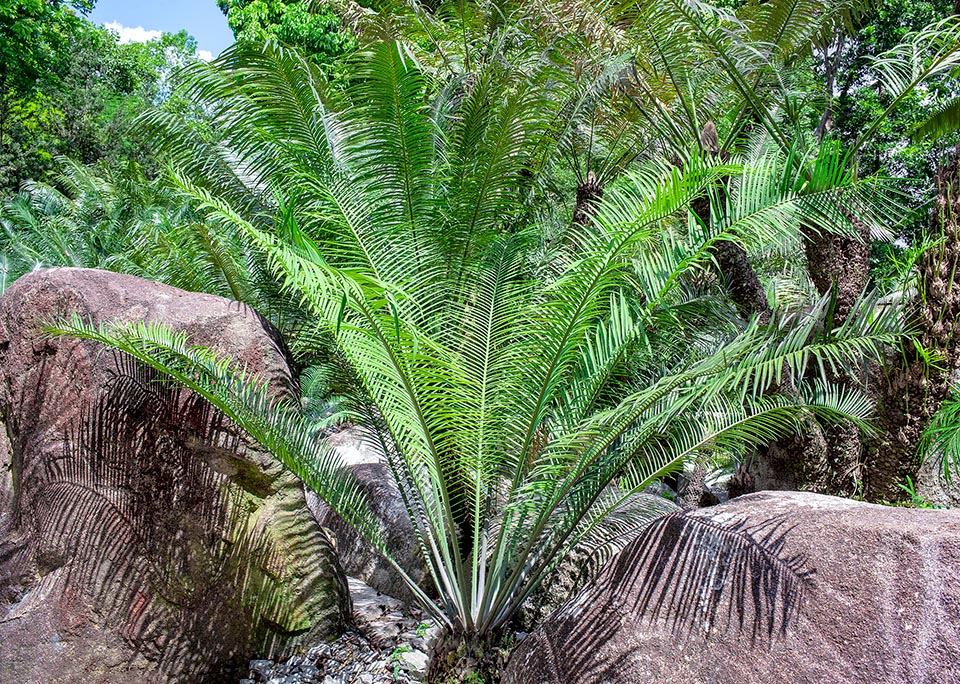 Elegant Ceratozamia mexicana var. tenuis, present in many botanical gardens of the tropics. The taxonomy of this plant is still studied by the botanists. Presently a certain number of species are grouped in the mexicana species, and it is not excluded that from further genetic studies may emerge elements to define new taxa © Giuseppe Mazza

Therefore, threatened in nature, is at danger of extinction, inserted in the Appendix I of the CITES (Convention on International Trade of Endangered Species) and its international trade is forbidden.

Ceratozamia mexicana was last modified: May 12th, 2020 by Peppino