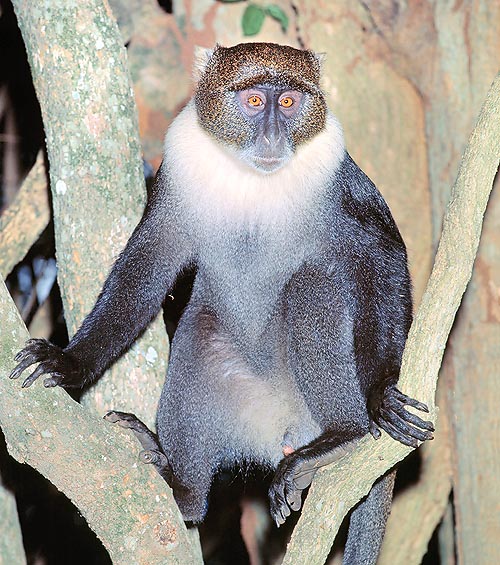 This species of cercopithecus forms a vast group of monkeys subdivided in several races or subspecies, diffused in all sub-Saharan Africa, but the western-most regions. One of the best known is undoubtedly the Cercopithecus mitis albogularis, so called due to the presence of a white dot in the region of the throat.

They are mainly present in the regions delimiting the Rift Valley; other regions where they abound are Zambia, the Congo River basin, Ethiopia and Sudan.

In general lines, they have a modality of arboreal life, with associated phases of terrestrial life. But the race Cercopithecus mitis albogularis, has the particular characteristic of living in the Mangroves, where it mainly nourishes of crabs, only case in the cercopithecus.

The name diademed monkey comes from the presence of a fringe of white hairs placed on the front, with the shape of a diadem. The coat is usually black all over the body, the front has rightly the diadem shaped fringe of white hairs whilst from the sides of the muzzle depart yellowish black tufts; the back is often reddish. These monkeys, 40-70 cm long with a 70-100 cm long tail, stand among the biggest specimens of the group. The males are heavier than the females and, for both sexes, the weight stands between 6 and 12 kg. A species closely related to the Cercopithecus mitis is the Hoest (Cercopithecus l’hoesti), which differs from the diademed monkey for the presence of tufts of white hairs on the sides of the head and for the tail which is brown instead of black. The diademed monkey has, in the wild, a life span of about 15-20 years.

Furthermore, in general lines terms, the cercopithecus differ from the members of the subfamily of the cynopithecids (baboons and macaques) for the less stout body, more slender and streamlined, the much longer tail and the less prominent muzzle. 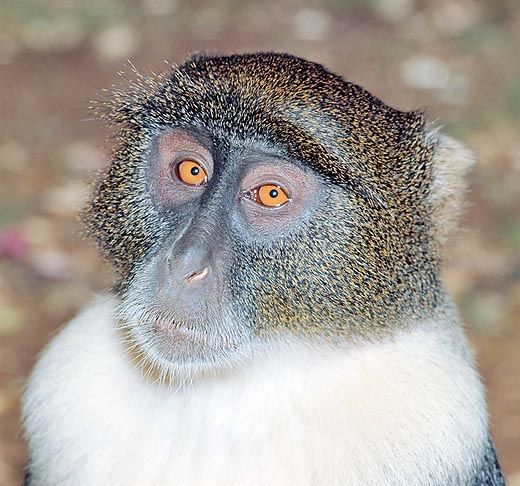 On the contrary, they differ from the Mangabeys or (Cercocebus), monkeys under many aspects, intermediate between the cercopithecins and the cynopithecins, for their smaller size and for the presence of a less prominent muzzle, as well as for the absence of laryngeal pouches.

In the context of the Old World monkeys afferent to the infra-order of the Siimiformes, to which the cercopithecus do belong, the monkeys closer to them are the erythrocebus, in particular the Erythrocebus patas, which differs for a bigger size, strong legs and a shorter tail; even more related are the Allen’s swamp monkeys (Allenopithecus nigroviridis), and the Angolan talapoins (Miopithecus talapoin), which may be recognized only by the zoological biologists’ eyes, thanks to inconspicuous anatomical particularities.

The Cercopithecus mitis lives in rather numerous groups of 12-42 individuals; like all cercopithecus, whose social asset however has not yet been deeply studied by the primatological biologists like for the other cercopithecus: the baboons, the hamadryads, the geladas, the patas and several macaques.

It seems, however, from some observations done in Africa during the fifties of the XX century by some zoological biologists of the Natural History Museum of Paris, the “Jardin des Plantes”, that in these monkeys we cannot see a rigid hierarchical order as it happens with the baboons and the macaques. Usually, the groups of cercopithecus, in the specific, of the diademed monkey, move in random order, and it seems also that their composition and structure do not remain constant in the time. Nevertheless, these monkeys manifest in several instances the tendency to help the members of the group, and the females of the same are particularly fierce in the defence of the progeny.

The Cercopithecus mitis may reproduce in whatever moment of the year. The females, after a period of about 5 months of gestation, deliver one baby only, which is bred with attentive cares of the same parents up to about 2 years of life. They are specifically diurnal life animals; as the other cercopithecus they nourish of seeds, fruits, flowers, small arthropods and reptilians. The IUCN classifies them as at minimum risk of extinction.