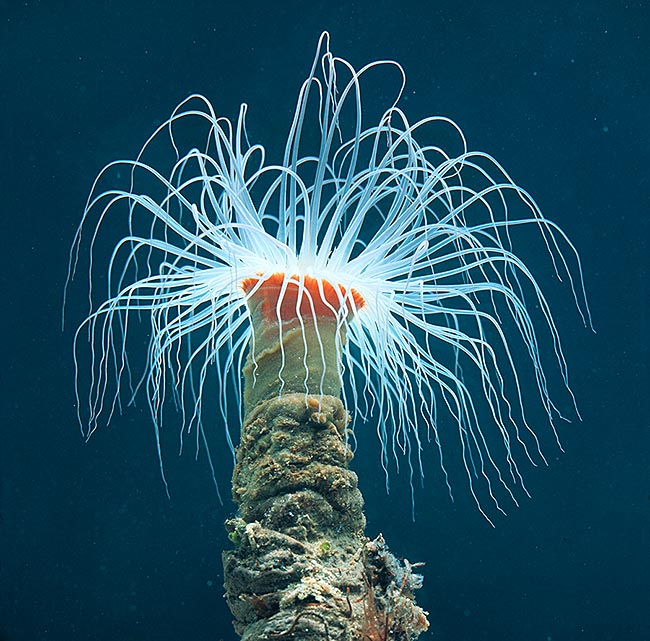 The Cerianthus membranaceus (Spallanzani, 1784) is a big invertebrate belonging to the phylum Cnidaria, that includes jellyfishes, corals and madrepores.

The name of cnidarians comes from the Greek “knide”, nettle, referred to the stinging properties of the tentacles of some of the most famous specie of the group. At times it may still be found the old classification of Coelenterata or coelenterates, that refers to the presence of the “celenteron”, that is the only body cavity “koilos”, cavity; “enteron”, intestine, characteristic still shared also by sponges and ctenophores. It belongs to the class Anthozoa, subclass Hexacorallia, which means that if we observe from above a section of a polyp of an hexacoral we shall see that the celomatic cavity is usually radially divided by septae in multiples of six. Order Ceriantharia, family Cerianthidae.

The Latin name of the cylinder anemone, or flower sea, comes from the Greek “kēríon”, that is honeycomb, probably referred to the inflammatory properties of the owter crown of tentacles, and “ánthos”, flower, due to its clear resemblance to the terrestrial flowers. The specific membranaceus refers to the membranous cover surrounding the same.

Endemic to Mediterranean Sea, typically findable in the north-western part of the basin and in the Adriatic Sea, on the shallow and sandy bottoms up to 35 m of depth. In the eastern Atlantic Ocean the distribution range extends up to Brittany. 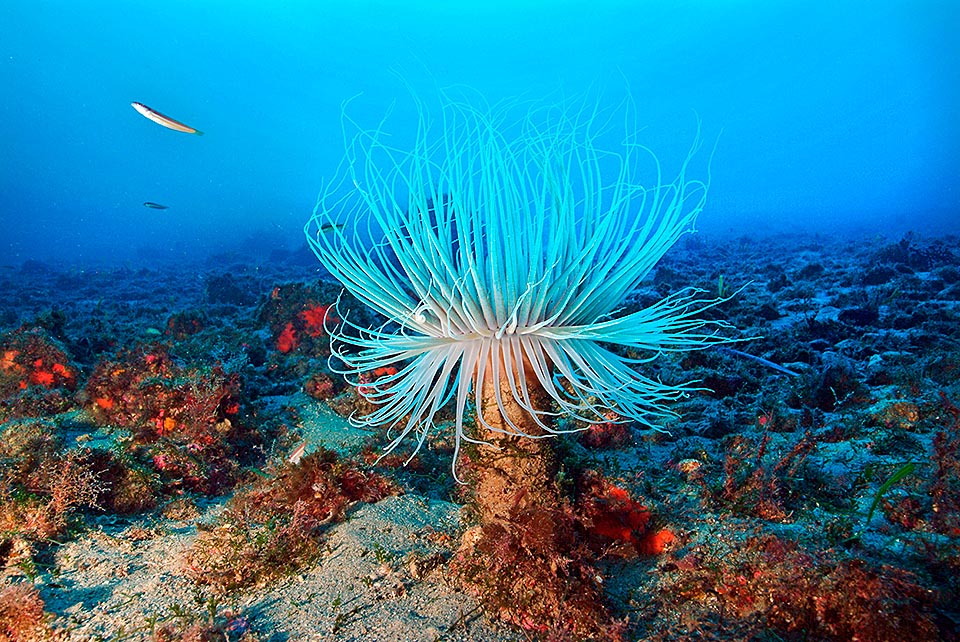 Cerianthus membranaceus loves slightly torbid coastal waters. Typical solitary polyp, has vermiform body in a tube of protective mucus solidified placed in a burrow dug a little at a time, over years, to 1 m of depth. Tentacles are not retractile but can slide with the whole animal inside this tunnel disappearing to the view in case of danger © Gianni Neto

Cerianthus membranaceus loves the calm and slightly torbid coastal waters, and for this reason well adapts also to the harbour areas, being moreover also a species fairly resistant to pollution. It occupies the sandy or silty bottoms included in the first metres of depth. It would seem that the two varieties forming the species, the violacea and the fusca, for their settlement do choose bottoms with different consistencies. Whilst the violacea variety prefers more resistant substrata such as muds hardened by the roots of the marine plants or by the thalli of the algae, the fusca variety can be found in softer bottoms and not too much colonized. 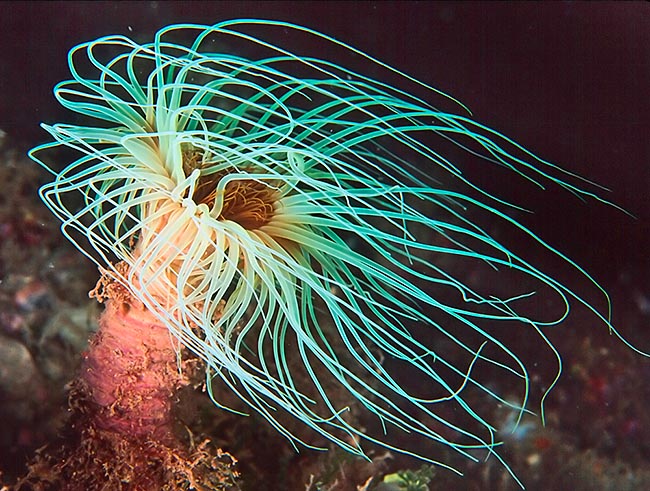 There are two types of tentacles in Cerianthus membranaceus: the big outer ones, stinging, used to seize the preys and the inner ones, small and brownish, having the task of taking them to the oral cavity © Gianni Neto

It is a sciophilous animal, which means that it prefers zones not exposed to the direct sun irradiation.

The outer crown of Cerianthus membranaceus tentacles is stinging, and the animal uses it for actively hunting small preys like crustaceans, larvae, or, more frequently, plankton. Various species of worms and crustaceans take advantage of the water stream produced by the crown of tentacles and of the protection of the same. In the Mediterranean, Phoronis australis, a small filtering phoronid, is a typical table companion, and grows attached to the outer side of the tube of the anemone.

Cerianthus membranaceus is a typical solitary polyp. It has a vermiform body installed into a tube secreted by special cells placed on the surface of the body, the ptychocysts. These produce a mucoid substance forming a sort of a protecting capsule around the animal.

The mucus mixes with other exogenous material, mainly sand, and can be reformed if the animal is removed from its place. The tube is not visible outside the substratum, from which usually gets out only the tuft of tentacles, or, alternatively, few centimetres of the upper edge of the membranous tube. As a matter of fact, the animal is capable to dig a burrow where it grows up. The tunnel is longer than the animal, reaching even one metre of depth, and is rightly inside this burrow that it hides when disturbed. The tentacles do not have retractile property, but it’s the whole animal who slides inside the burrow until it disappears from view. 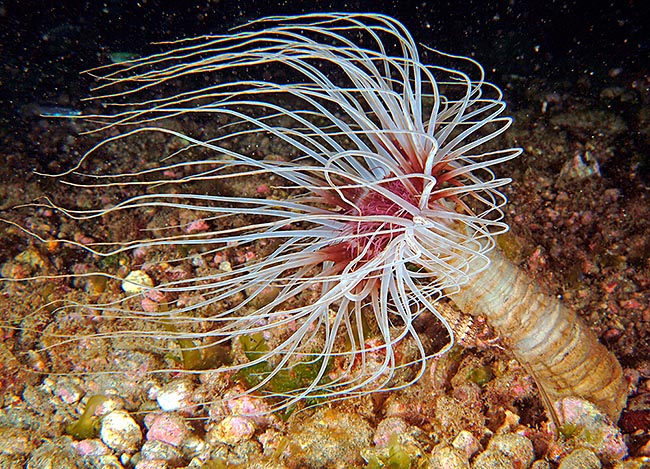 The tentacles are divided in two different crowns easy to distinguish by colour and morphology. The outer crown, or marginal, is the stinging one, of tobacco-violet colour with brown-white dotting, or with greenish fluorescences. It is formed by four rows of tentacles longer than those of the inner crown, about 20 cm and in a number exceeding one hundred, and that the animal utilizes to paralyze the preys and take them towards the central crown. This last is formed by smaller and thinner tentacles, of dark-brownish colour, that have the only function of directing the alimentary particles towards the oral cavity.

The adult reaches a maximum length of 35-40 cm and 3 cm of diametre. It is a long-living animal: even if precise information do not exist, the cerianths hosted in the historical Naples aquarium have passed the age of 30 years.

The Cerianthus membranaceus is a solitary anthozoan, and can quickly retreat inside the tube if disturbed or if feeling menaced. The tube where it lives is holed in way that the water, that keeps it swollen in the portion where the animal is not present, can rapidly go out when the individual moves. Though Cerianthus membranaceus is an animal living firmly anchored to the seabed, it can at times leave the tube for moving. In this case, or if mechanically removed from its place, it may form again the membranous outer tube. Furthermore, it has an excellent regenerative capacity, therefore is able to form again also the portion of body that has been eventually removed. 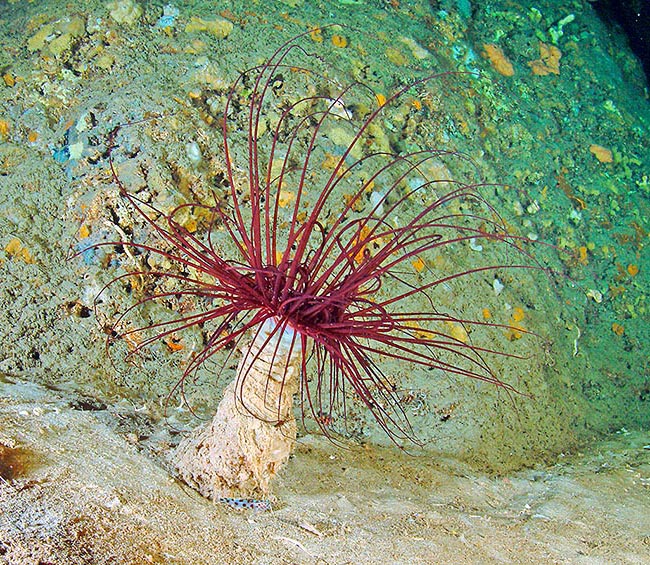 There are two varieties of Cerianthus membranaceus: the violet and the fuscous that choose different seabeds © Gianni Neto

Cerianthus membranaceus is a proterandrous hermaphrodite, which means that the smallest individuals are males, whilst the biggest ones are females. Thanks to this diachrony the selfing between gametes cannot take place.

In West Mediterranean the eggs appear in July, in Adriatic from January to June. The fertilization happens in the water column, where sperms and not fecundated eggs meet to generate a larva who probably lives a planktonic life for some time, but the timings are unknown.

From the study of similar species it is known that a tentacled larva reaches the bottom where it settles to generate the adult individual.  Unlike the so-called true anemones, belonging to the order Actiniaria, the tubicolous anemone Cerianthus membranaceus cannot reproduce asexually.

Cerianthus membranaceus was last modified: May 3rd, 2020 by Giuseppe Mazza