Rare in the aquariums the Bluelashed butterflyfish (Chaetodon bennetti Cuvier, 1831), belongs to the class of the Actinopterygii, the ray-finned fishes, to the order of Perciformes and to the colourful family of Chaetodontidae.

The name of the species bennetti honours the memory of the British physician and zoologist Edward Turner Bennett (1797-1736) who did show this species to Cuvier at the British Museum of London.

It has a very vast distribution, but with few members, in the tropical waters of the Indo-Pacific. We find it from South Africa and Madagascar up to India, Sri Lanka and Australia, and then in Indonesia, New Guinea, Micronesia, New Caledonia, Philippines and Taiwan up to south of Japan. Eastwards, it reaches the Fiji and Tonga islands, and southwards, Lord Howe Island and Easter Island. 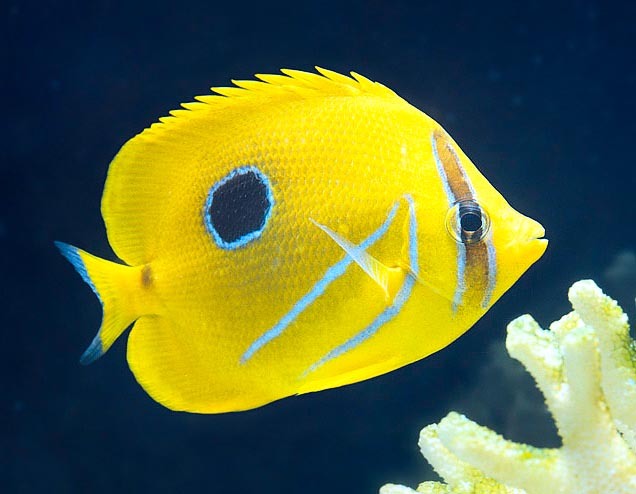 It lives in the madreporic formations, between 1 and 30 m of depth.

The bluelashed butterflyfish nourishes almost exclusively of coral polyps and when that happens, of small invertebrates. For some, it should eat also some seaweed, but this is not confirmed, as it is a fairly rare species and therefore little studied.

Usually, the adults live paired and reproduce with pelagic eggs. The juveniles are quite similar to the parents, but the light blue patterns are initially white. Seen that the Chaetodon bennetti does not have any alimentary interest and is not required by the aquaria lovers, because when in captivity it does not find the suitable food, we might conclude that, in spite of the global warming and the reefs destruction, it is not an endangered species, because the individuals to nourish are, after all, a few with an enormous distribution.

The populations may double in less than 15 months and nowadays the vulnerability index is very low, 16 per 100; but as the experts of Red List say, it is “Data deficient”, which means that they do not have enough elements for evaluating the situation.