The Burgess’ butterflyfish (Chaetodon burgessi Allen & Starck, 1973) belongs to the class of the Actinopterygii, the ray-finned fishes, to the order of the Perciformes and to the picturesque family of the Chaetodontidae that guests the butterfly fishes.

The name of the genus Chaetodon comes from the Greek “χαίτη” (khaite) = hair and “ὀδούς” (odous) = tooth, due to the teeth shaped like bristles, whilst that of the species, burgessi, in Latin “of Burgess”, is honouring the American ichthyologist Warren E. Burgess, author, inter alia, of a monograph concerning the butterfly fishes.

The Chaetodon burgessi is a species of tropical Indo Pacific. We find it in Malaysia, Indonesia, and Philippines, and then, proceeding eastwards, in the Palau islands, in Papua New Guinea, Micronesia and Tonga islands. 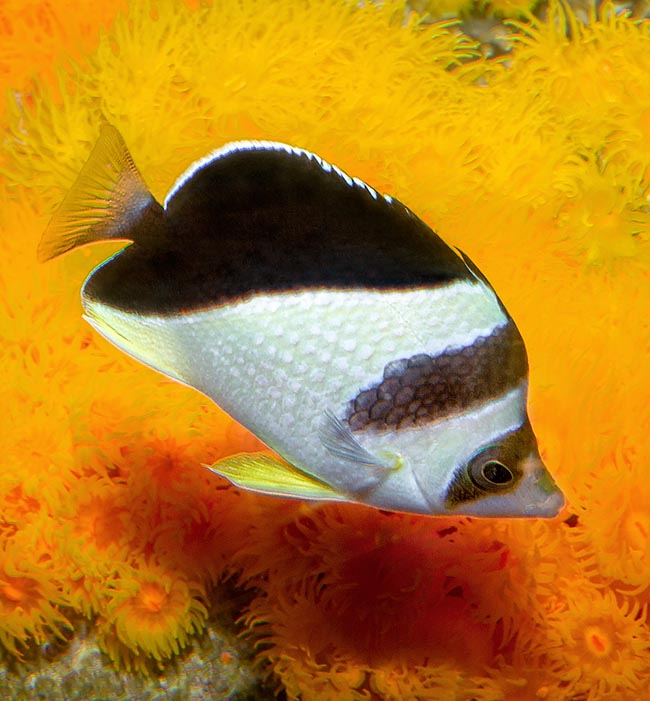 Like Chaetodon mitratus, to which resembles, the Chaetodon burgessi swims in relatively deep waters for a butterflyfish, up to about 80 m on the reefs outer cliffs, among gorgonians and black corals © Giuseppe Mazza

Like the Chaetodon mitratus, to whom it looks like, it swims in waters relatively deep for a butterfly fish, between 20 and 80 m of depth, on the outer cliffs of the reefs, among the gorgonians and the black corals.

The body is flattened laterally with high back, as normal among the Chaetodon, but with an unusual profile, also because of the diagonal dark pattern.

This last dark band, inter alia, is practically the same of that of the Hawaiian butterflyfish (Chaetodon tinkeri) and seen that in some populations of Chaetodon burgessi the band that camouflages the eye is orange with black edge as in the Hawaiian fish, some evoke a close relatinship between the two species.

The snout is longer and more pointed than Chaetodon mitratus, and the mouth, also protractile, has as always tiny teeth similar to brushes on both jaws.

The Burgess’ butterflyfish nourishes of small benthic invertebrates it finds rummaging in the fissures of the rocks or between the corals. It lives isolated or in couple, which seem lasting, that take form during the reproductive period. 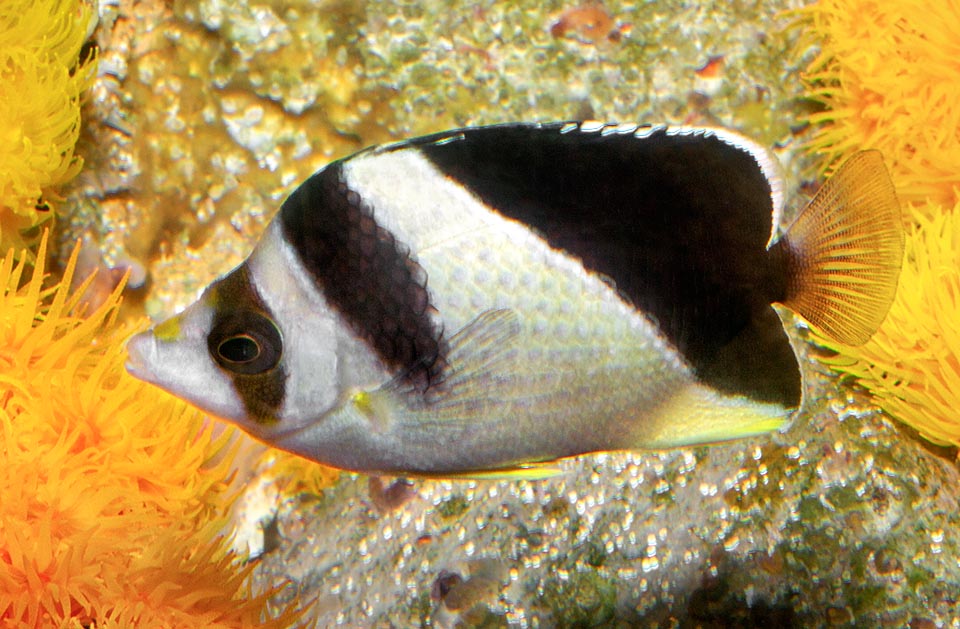 The mating occurs in mid-water, while swimming, and the eggs, fecundated in the flight by the male, are entrusted to the currents. They hatch on the following day. The pelagic larvae go adrift and the small fishes often reach the bottoms very far away from the place where they were born.

Much less expensive than the Chaetodon mitratus and equally easy to feed, the Chaetodon burgessi is very much required by the aquarium market and regularly exported to Philippines.

However there is no risk for the populations, seen that they may double in less than 15 months. The vulnerability index of the species is nowadays (2020) very low, marking only 12 on a scale of 100.