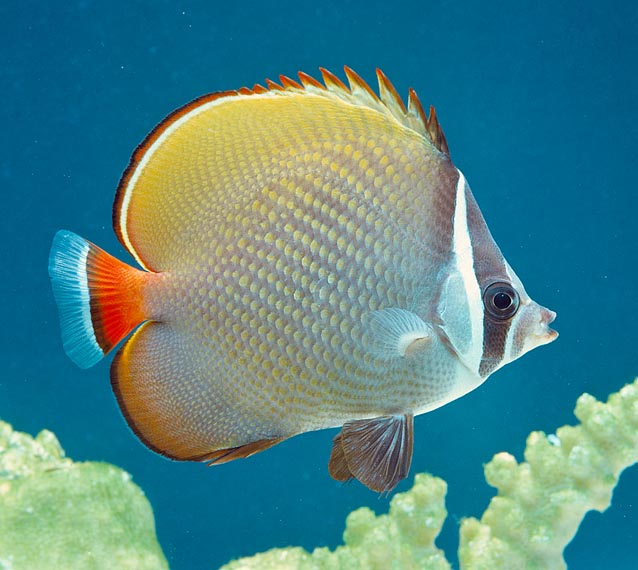 The Redtail butterflyfish (Chaetodon collare Bloch, 1787) belongs to the class of Actinopterygii, the ray-finned fishes, to the order of Perciformes and to the family of Chaetodontidae.

The name of the species collare in Latin means collar, due to the white band it has around the head.

The diffusion of this species is very vast. Present in the tropical waters of the Indian Ocean from Mozambique and Madagascar, up to the Arabic Sea and the Gulf of Oman, India, Maldives, Sri Lanka and Thailand, we find it then in the Pacific, from Australia, Indonesia and the Philippines up to the southern coast of Japan, New Caledonia and the Fiji Islands.

It swims in the plain part of the reefs and on the border of the barriers between 2 and 15 m of depth. The juveniles are frequent also in the brackish waters of the estuaries.

The overall colour is brown, more or less dark, with great paler scales, tending, especially towards the back, to the bright yellow. The facial mask foresees, starting from the mouth, a first dark zone followed by a white vertical stripe, by an almost black band hiding the eye, a white band, the famous collar and then, again, the dark colour of the snout fading on the body. 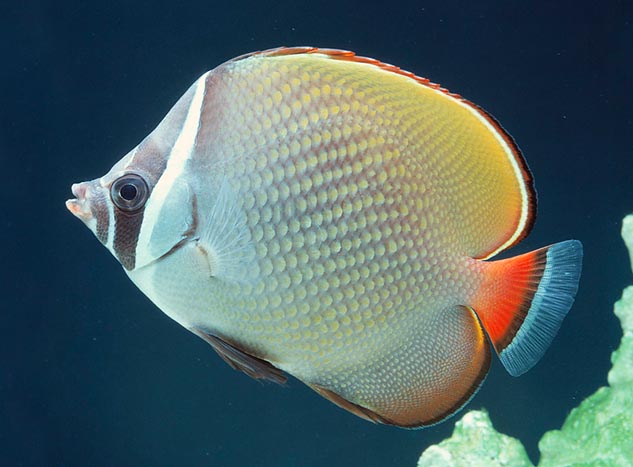 The terminal part of the dorsal fin is red, preceded by a white then dark small border; the caudal is typically red, with dark small border, then clear and finally transparent, like the pectoral fins, whilst the ventral ones are dark.

In other words, a sophisticated palette, as one would expect from the butterflyfishes.

The snout is elongated, for reaching the madreporic interstices, and the mouth has some bristle-like teeth, for a mainly carnivorous diet formed by small orga- nisms.

Active all day long, the redtail butterflyfish brushes conscientiously the reef: small crustaceans and especially cnidarians: hydrozoans, scyphozoans and anthozoans, with a particular love for the polyps of the madrepores which are its daily bread.

The reproduction is a fact of pair. The eggs are pelagic and the caudal fin, flamboyant in the adults, is green in the juveniles. Even if it is a fish subject to the aquariology trade, it is not, by sure, endangered. The populations may double in 15 months and the vulnerability index is very low: 15 per 100.

In 1985 the Chaetodon collare had the honour of a stamp of the Principality of Monaco.