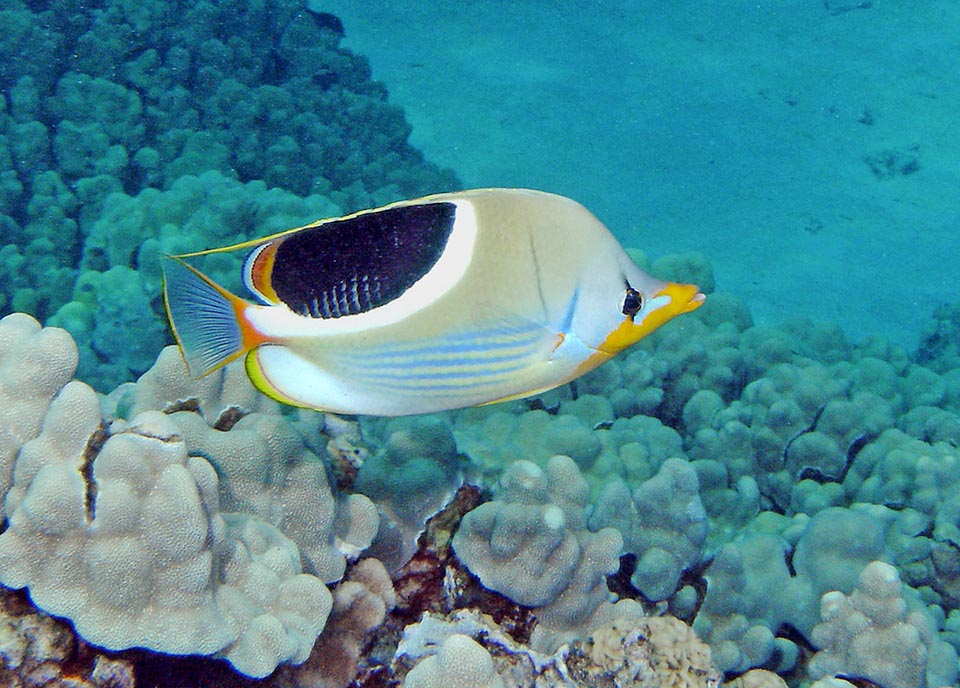 The Saddled butterflyfish (Chaetodon ephippium) is present in the Pacific Ocean tropical waters and in the nearby ones of the Indian, starting from India and Sri Lanka © Barry Fackler

The Saddle butterflyfish (Chaetodon ephippium Bloch & Schneider, 1801), belongs to the class of the Actinopterygii, the ray-finned fishes, to the order of the Perciformes and to the colourful family of Chaetodontidae.

The name of the genus Chaetodon comes from the Greek “khaite”, hair, and “odous”, tooth, due to the bristle-shaped teeth.

The name of the species ephippium comes from the Greek “efippion” = saddle, due to the saddle-shaped design on the back. 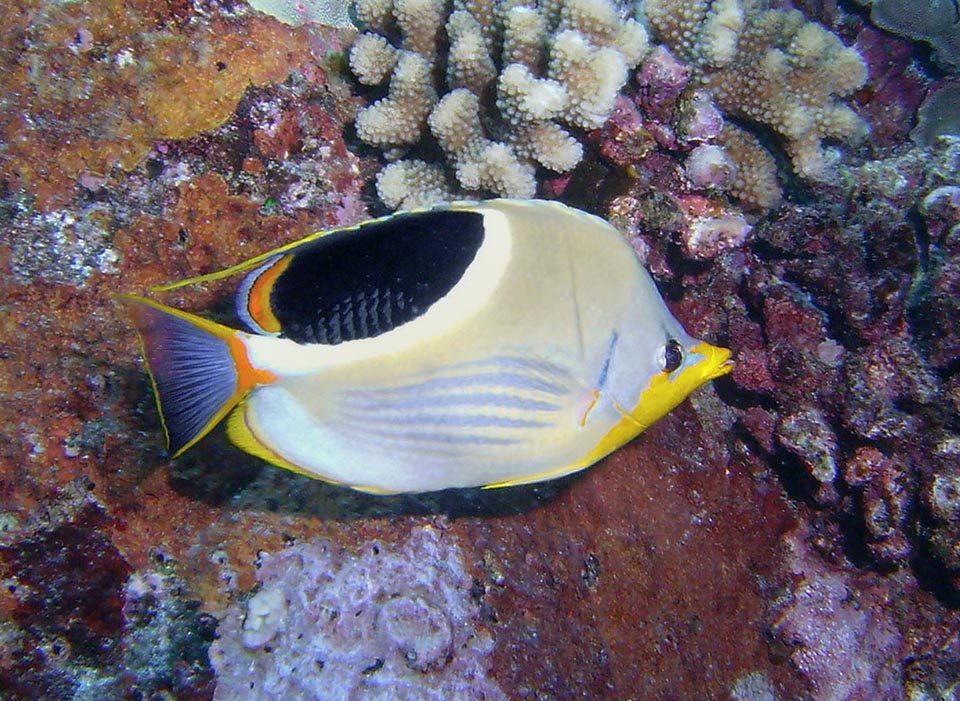 It lives in shallow waters, not beyond 30 m, and owes its vulgar name to the showy black spot shaped like a horse saddle present on the back © Barry Fackler

The Saddle butterflyfish has a very vast distribution. It lives mainly in the tropical waters of the Pacific Ocean, but also, in a lesser extent, in the Indian Ocean.

It is at home in Indonesia, Australia, New Guinea, Micronesia, New Caledonia, Philippines, Taiwan, China, up to southern Japan, and, eastwards, Vanuatu, Fiji, Tonga, Samoa, up to Hawaii islands. We then find it, in the Indian Ocean, in Malaysia and in Sri Lanka. 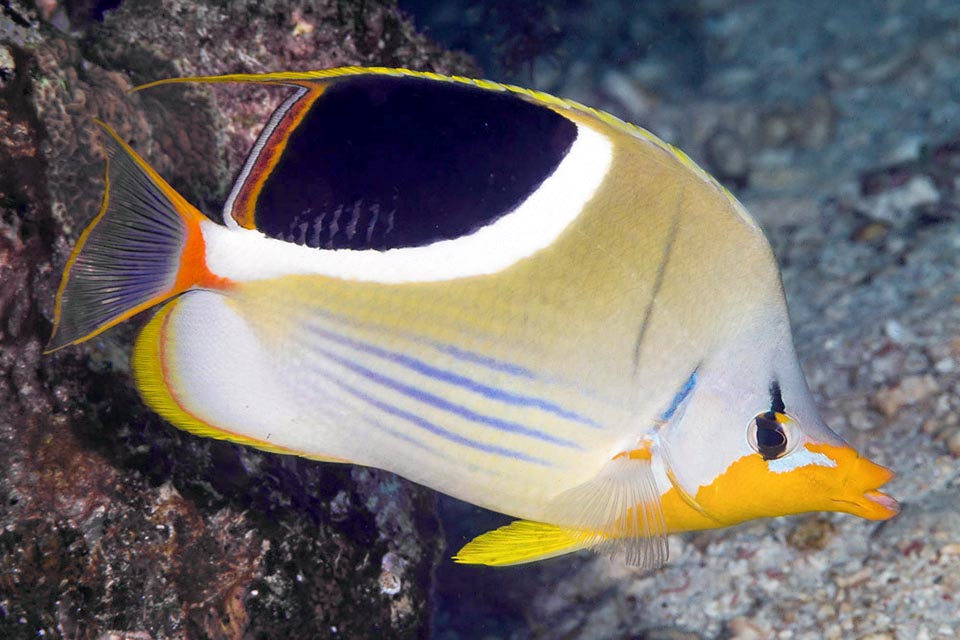 On the sides we note some bluish parallel lines, and the yellow orange snout is elongated for preying in the microfauna crevices © François Libert

It visits the sunlit madreporic formations looking for filamentous seaweeds and predates the microfauna up to 30 m of depth.

With even 30 cm of length, it is one of the greatest butterflyfishes. The body is flat, almost squared, apart the head, with a pointed snout for rummaging in the crevices. 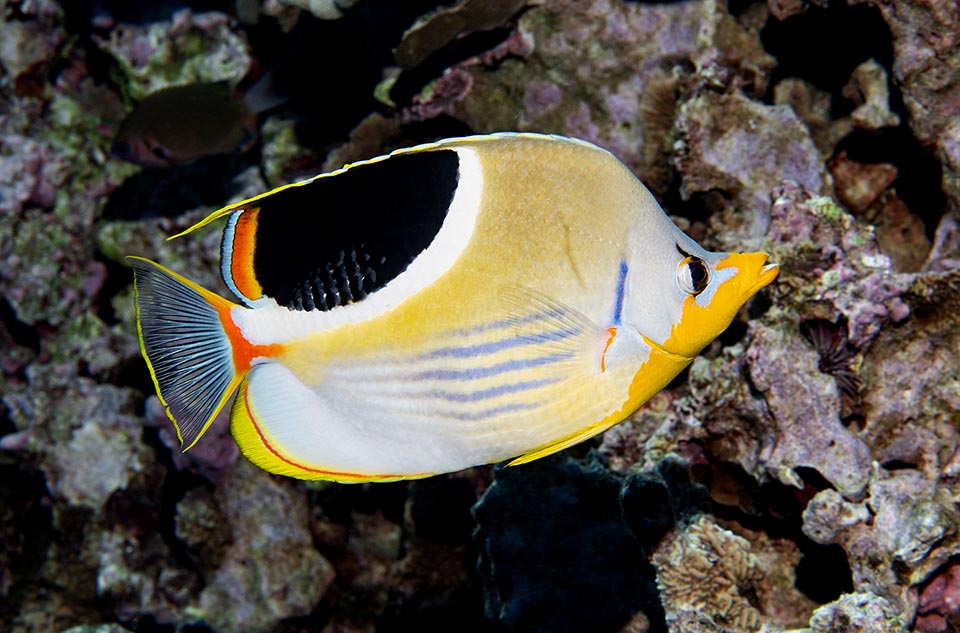 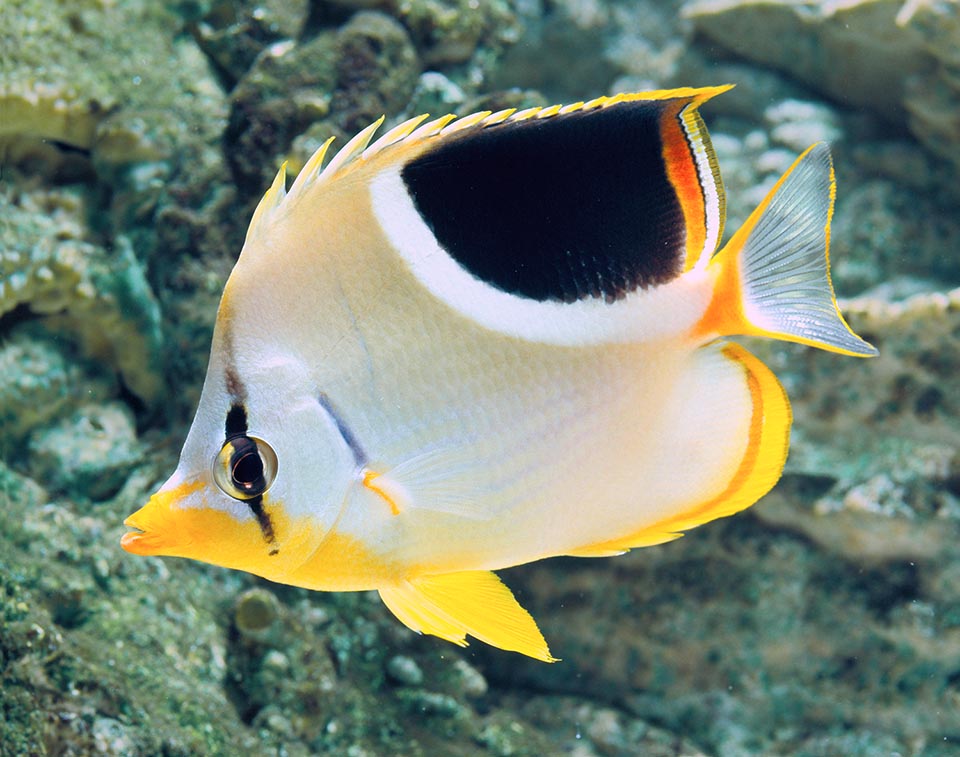 The roundish subadults have a shorter snout, attenuated lateral bands and do not have the showy extension of the dorsal fin © Giuseppe Mazza

The saddle butterflyfish is active day and night. It swims solitary, in pair or in small schools looking for filamentous seaweeds, polyps of coral, small crustaceans, polychaetas and eggs of other fishes. 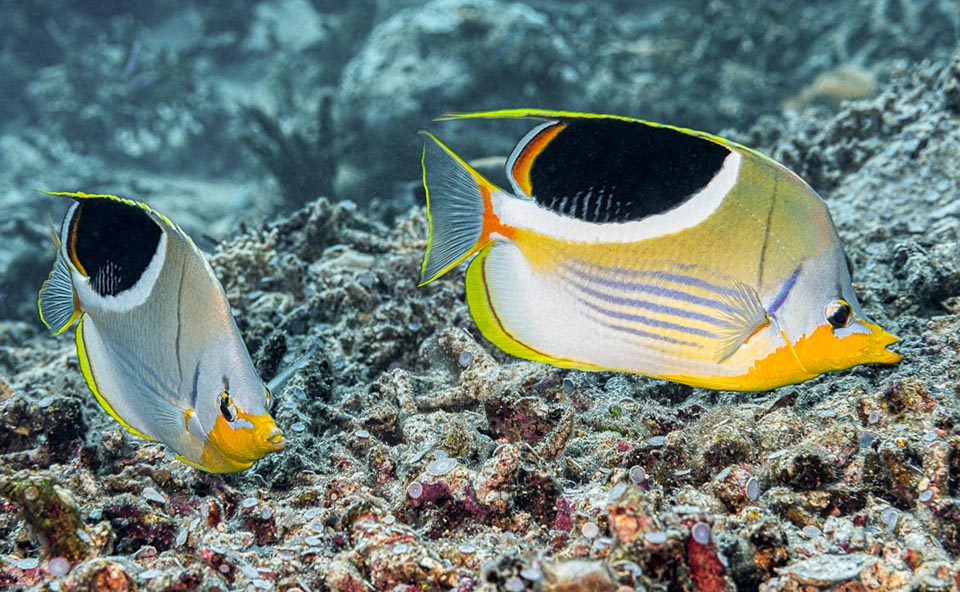 Reproduction doesn’t occur in groups but in pairs who entrust the fecundated eggs to the currents. Resilience is good and it is not an endangered species © François Libert

The reproduction does not take place in group, but in pairs with pelagic eggs.

Even if predated by the aquaria lovers, it has a modest fishing vulnerability index, just 20 on a scale of 100, because anything goes, thus reacting better than other species to the environmental changes, with populations which may double in less than 15 months.