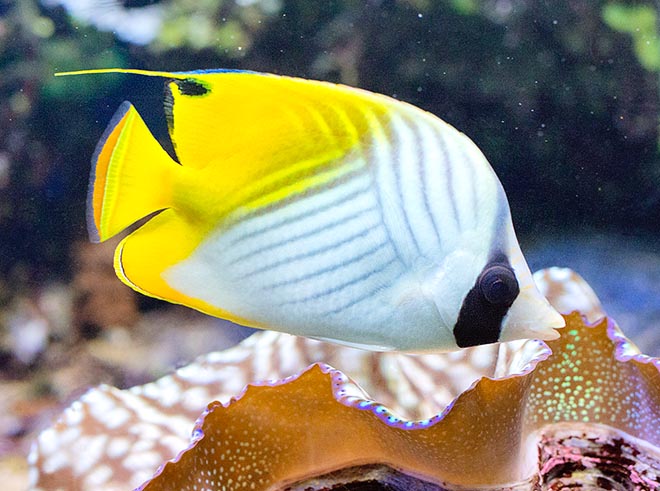 The interesting and unusual Threadfin butterflyfish (Chaetodon auriga Forsskål, 1775) belongs to the class of Actinopterygii, the ray-finned fishes, to the order of Perciformes and to the family of Chaetodontidae.

The name of the species auriga means coachman in Latin, with reference to the extension of the dorsal fin in the adults, similar to the horsewhip used by the drivers of the Roman carriages.

It has a very vast distribution in the tropical waters of the Indo-Pacific. We find it from South Africa and Madagascar up to the Red Sea and the Arabic Sea, and then the Maldives, India, Sri Lanka, Thailand, Australia, Indonesia, New Guinea, Micronesia, New Caledonia, Philippines, Taiwan, China up to southern Japan. Eastwards, it reaches Ducie atoll, the Marquesas, Hawaii and the Galapagos Islands; southwards, Lord Howe and Easter Islands.

It is common in the madreporic formations and in the rocky or debris zones, often in very shallow waters, even if it can go down along the borders of the reefs up to about 35 m of depth.

The Threadfin butterflyfish may reach the 23 cm. The body is flat, more or less oval, with the snout elongated for catching the food between the corals. The dorsal fin has about 12-13 spiny rays and 22-25 soft; the anal has 3 spiny rays and 19-21 soft; the ventral and the pectoral ones are unarmed; the caudal is more or less blunt. The livery recalls, due to the extension of the dorsal fin, the Chaetodon ephippium and, due to the black dot edged of blue preceding it, although if smaller, the odd pattern recalling a solar eclipse of Chaetodon bennetti. For the rest, considering that the fore part of the body has white background and the back is yellow, we note some parallel dark lines, which, however, do not form, as is the case of the Chaetodon paucifasciatus, some angular brackets, but two zones with bands rotated by ninety degrees. 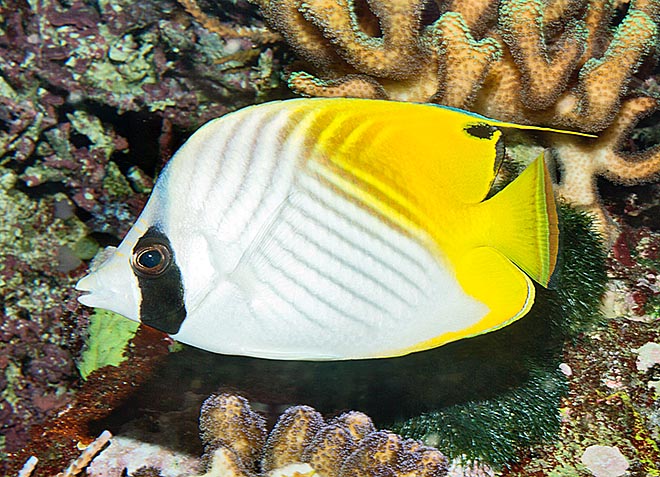 Practically omnivorous, it stands better than other species the climate changes © Giuseppe Mazza

As customary among the butterfly fishes, a mask hides the eye. In this case, this is wide below and more nuanced up, almost aligned with the first dark band.

On the tail, after the translucent terminal zone, we note an orange pattern, sided by a yellow equivalent one.

The Chaetodon auriga is practically omnivorous.

It nourishes of madrepores and corals, fragments of sea anemones and polychetes, foraminifers of the genus Calcarina, nudibranch molluscs, such as the Phestilla sibogae, and small crustaceans, like the ostracods or the shrimps of the genus Alpheus, but also of phytoplankton and algae.

So, a very varied diet which allows it to resist better than other species to the degradation of the reefs related to the climate changes, with a very low vulnerability index of 12 per 100. The populations can double in little more than one year and, excluding the aquaria trade, it is not chased by the man because it doesn’t have any alimentary value.

It lives solitary or paired, especially during the reproductive period, after the fecundation of the eggs which are abandoned to the currents.

The Threadfin butterflyfishes at times gather even in numerous schools, for collective migrations on great distances, looking for new areas to exploit.