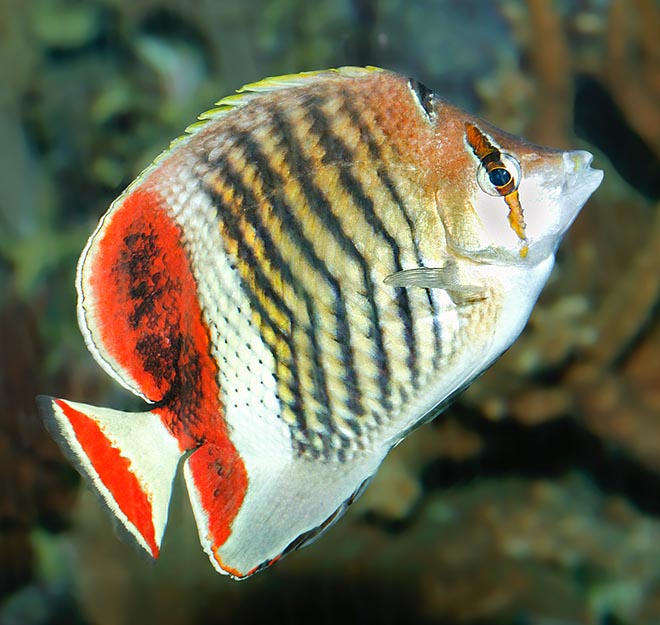 Chaetodon paucifasciatus is surely not endangered as it eats polyps, microfauna and algae © Giuseppe Mazza

Eritrean butterflyfish (Chaetodon paucifasciatus Ahl, 1923) belongs to the class of the Actinopterygii, the ray-finned fishes, to the order of the Perciformes and to the family of Chaetodontidae.

The species name paucifasciatus means, in Latin, “with few bands”.

It lives in the tropical waters of the Indian Ocean, mainly localized in the Red Sea and the Gulf of Aden.

It is common in the plain part of the madreporic formations, but it can go down also along the borders of the reefs up to about 60 m of depth.

The Chaetodon paucifasciatus nourishes of madrepores polyps, gorgonians, polychetes and small crustaceans, but also of algae, and it’s thanks to this varied diet that it resists better than other species to the degradation of the reefs connected with the climate changes, with an incredibly low vulnerability index of 12 per 100. In fact, excluding the aquaria trade, it is not fished for alimentary purposes and the populations can double in less than 15 months

It lives in small schools, very often paired. After having spawned and fecundated the eggs, abandoned to the currents, the parents, usually, do not separate.