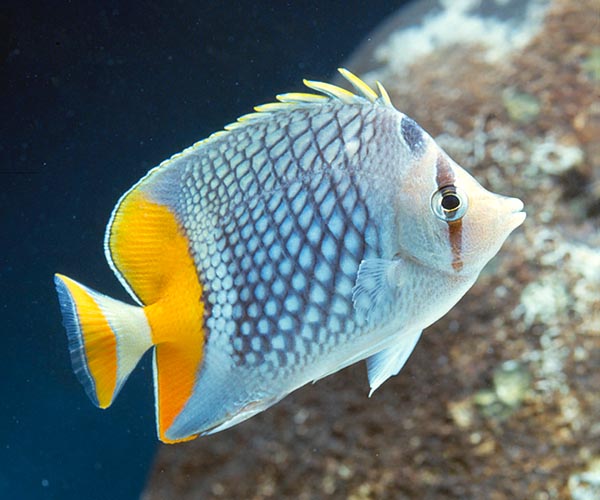 For some, Chaetodon xanthurus should be a subspecies of Chaetodon madagaskariensis © G. Mazza

The Seychelles butterflyfish (Chaetodon xanthurus Bleeker, 1857) belongs to the class of Actinopterygii, the ray-finned fishes, to the order of Perciformes and to the family of Chaetodontidae.

It lives in the tropical waters of the western Pacific Ocean, from Indonesia to southern Japan, often cohabiting with the similar Chaetodon mertensii Cuvier, 1831, whilst in the Indian Ocean it is replaced by the Chaetodon madagaskariensis Ahl, 1923, much alike but without the typical checkered pattern.

For some zoologist it should be a subspecies of Chaetodon madagaskariensis along with the Chaetodon paucifasciatus Ahl, 1923 of the Red Sea and the Gulf of Aden, and the Chaetodon mertensii.

It swims in the madreporic formations, especially at the border of the reefs, usually at 15-50 m of depth.

Flat, with relatively squared body when the fins are folded back, it reaches the 14 cm at the maximum. 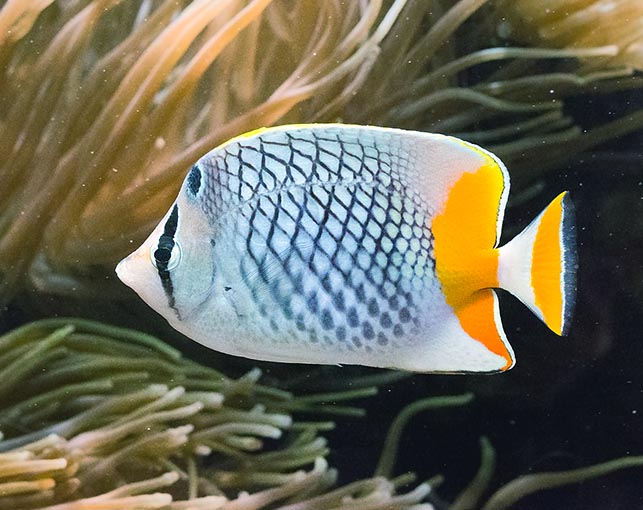 Starting from the head, after the snout, slightly elongated for looking for the food among the corals, we note a vertical black band edged of white crossing the eye, and higher up, where the back starts, an analogous spot, similarly edged of white. Then, the body is reticulated.

The Seychelles butterflyfish nourishes of seaweeds and of small benthic invertebrates. It lives solitary or paired, especially during the reproductive period. The eggs are pelagic.

Even if, at times, it is fished for the domestic aquaria, it is not by sure an endangered species: it is in fact of no value at all as aliment, the populations may double in 15 months only and the vulnerability index is very low being of 14 per 100 only.