The Klein’s butterflyfish (Chaetodon kleinii Bloch, 1790) belongs to the class of the Actinopterygii, the ray-finned fishes, to the order of the Perciformes and to the multi-coloured family of the Chaetodontidae that counts 132 species with about 90 butterflyfishes.

The name of the genus Chaetodon comes from the Greek “χαίτη” (khaite) = hair and “ὀδούς” = tooth, due to the teeth shaped like bristles, whilst that of the species, kleinii, in Latin “of Klein”, honours the memory of the German naturalist Jacob Theodor Klein, a “taxonomical precursor”, illustrious contemporary of Linnaeus, who wrote a treatise on the fishes and a book on the echinoderms.

Starting from the Red Sea, the Chaetodon kleinii is present in almost all the tropical Indo-Pacific. Indicatively, we find it in Africa, along the coasts, from Somalia to South Africa, including Madagascar with adjacent islands, the Maldives, in India, Sri Lanka, Malaysia, Indonesia, Papua New Guinea, Micronesia and Australia. From here it has colonized northwards, the Philippines, Taiwan and the southern part of Japan, and southwards the New Caledonia. Proceeding eastwards, we find it in the Fiji Islands, Tonga, Samoa and Kiribati. Finally, it reaches the Hawaii and then the Galapagos in South America. 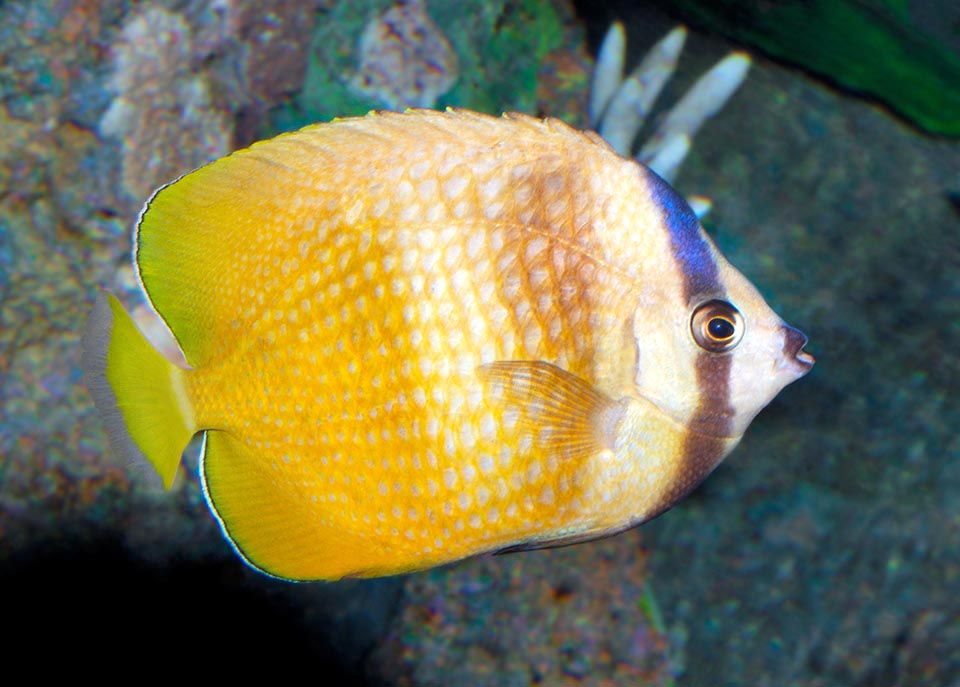 The Chaetodon kleinii is present in the Indo-Pacific tropical waters, from Red Sea and the African coasts to the Galapagos © Giuseppe Mazza

The Chaetodon kleinii usually swims under the 10 m of depth, going down to the 60 m at most, along the rocky coasts and mainly among the madreporic formations where are present the polyps it nourishes of, but it can be found also in shallow waters. It is frequent in the lagoons, especially in the canals fed by the tides, and on the outer side of the reefs.

It measures less than 14 cm. The body, flat laterally as usual among the Chaetodon, has a profile almost rectangular. The snout is short with dark lips, like the small zone between these last and the nostrils.

The background colour, rather variable seen the presence of very far apart populations, usually displays 3 pale vertical belts, at times just hinted, in the fore part of the fish. 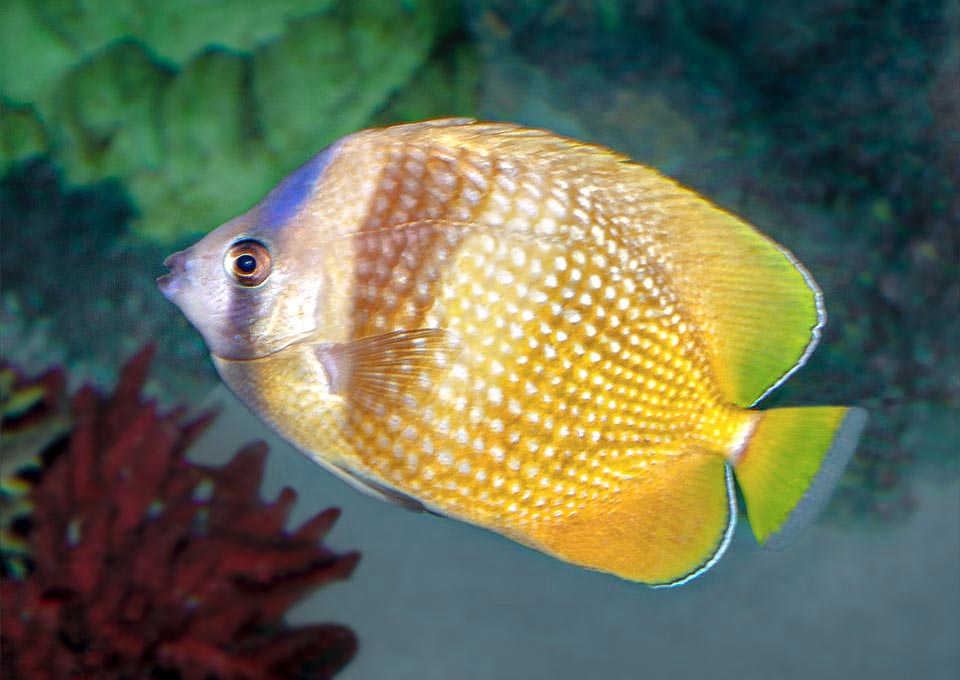 The first is located between the snout and the dark vertical band, bluish on top, that hides the eye reaching the pelvic fins; the second one is centered on the gills and the third is placed at the limit of the first half of the body. In Indonesia and in Palau these pale bands are usually more marked, whilst at the Hawaii and in other locations they almost disappear.

The Klein’s butterflyfish nourishes of polyps of madrepores, zooplankton, small crustaceans and other benthic invertebrates it finds rummaging among the corals, but does not disdain the vegetables, mainly algae. 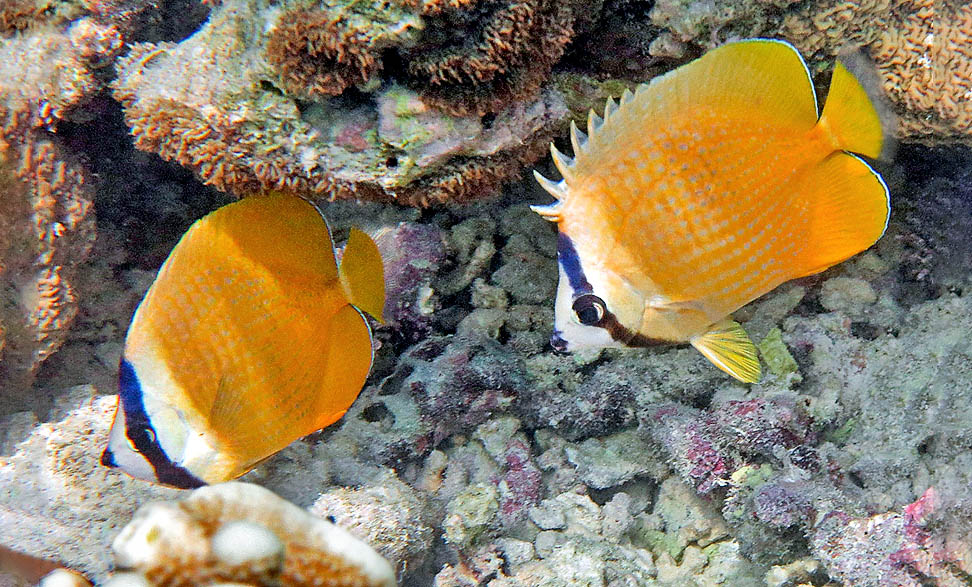 Maldives couple. To note the dorsal up to the right as defense sign and the pelvic fin, usually dark, that here is orange © Gianemilio Rusconi

It often swims in stable couples. For the marriage the spouses go up to the surface and the fecundation takes place in mid-water, with eggs fecundated at the flight by the male and immediately entrusted to the currents. They hatch the following day and the pelagic larvae go drifting for about 2 months until when the small fishes, 12-15 mm long, are at last capable to swim and to reach the bottom, often very far away from the place where their birth occurred.

It is not an endangered species. With populations able to double their membres in less than 15 months, the vulnerability index is nowadays (2020) very low, marking only a 12 on a scale of 100.