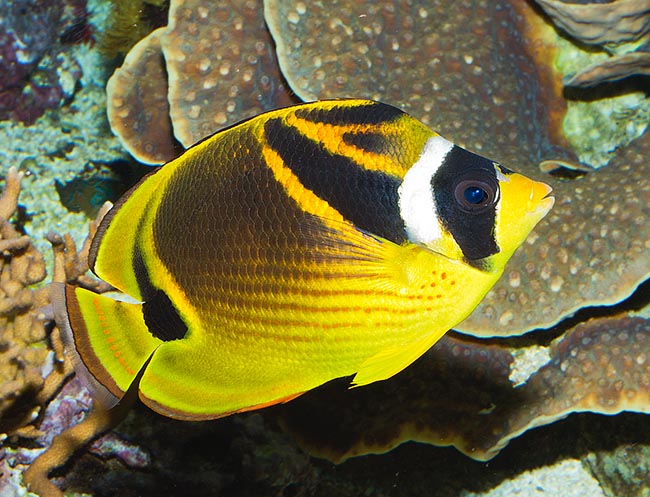 The Raccoon butterflyfish (Chaetodon lunula  Lacepède, 1802) belongs to the class of the Osteichthyes, the bony fishes, to the Actinopterygii, the ray-finned fishes, to the vast order of Perciformes and to the colorful family of Chaetodontidae.

The name of the species lunula comes from the Latin “luna” = moon, night, therefore, “small moon”, with reference to the black crescent it has on the eyes, followed by an analogous white pattern, and maybe also due to the fact that it is a nocturnal butterflyfish.

This characteristic and the black band on the eyes explains also the Italian, English
and French name, of raccoon, an equally nocturnal animal

It has a very vast distribution in the Indo-Pacific. We find it from South Africa, Madagascar, East Africa and Somalia up to the Maldives, India, Sri Lanka, Thailand, Australia, Indonesia, New Guinea, Micronesia, New Caledonia, Philippines, Taiwan, and China up to southern Japan. Eastwards, it reaches the Marquesas, Ducie Island, Hawaii and the Galapagos; southwards, Lord Howe and Easter islands. 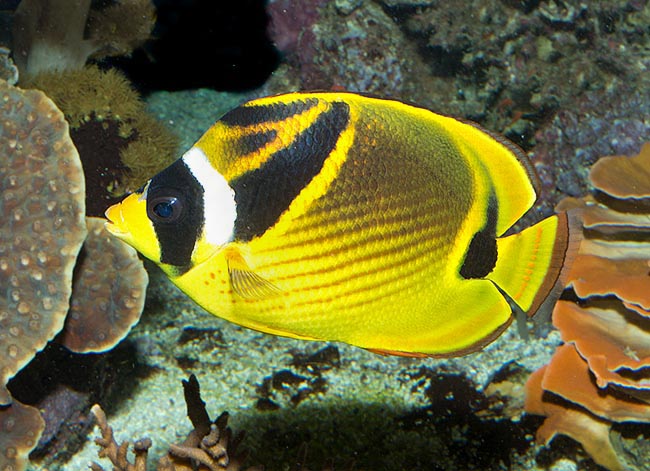 It lives in the atolls and on the border of the madreporic formations up to 30 m of depth.

The Raccoon butterflyfish can reach the 20 cm. The body is flat, more or less oval, with robust snout, slightly pointed.

Yellow is the background colour. The wide carnivalesque black band hiding the eyes is followed by a white band and then by two black triangles pointing towards the back. There is also a showy black spot on the caudal peduncle, which extends like an upside down comma on the back. The higher part of the sides, dark, breaks in direction of the belly into reddish lines ending in small dots. 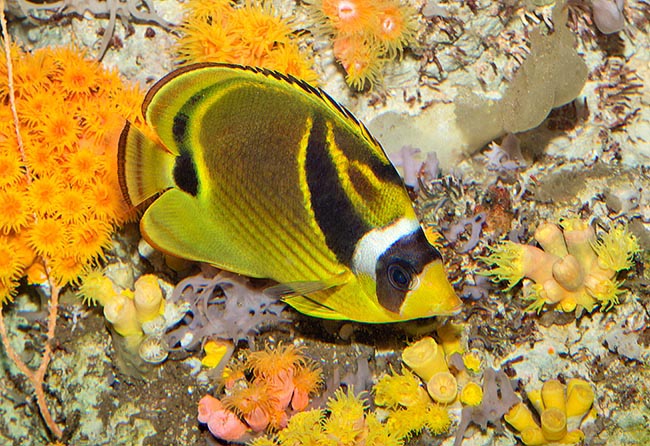 The Raccoon butterflyfish lives in pairs or small schools, active, as mentioned before, during the night.

It mainly nourishes of nudibranch molluscs and of tubicolous polychetes, without ignoring the crustaceans, the small benthic organisms and the algae. The polyps of madrepore enter only marginally its alimentary diet.

After the fecundation, the eggs are entrusted to the currents.

The populations may double in less than 15 months, the diet is varied, and therefore the vulnerability index is low: only 16 per 100.