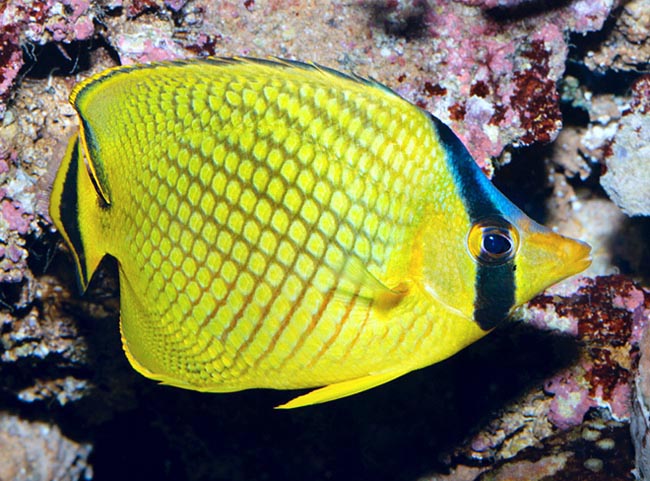 The Latticed butterflyfish (Chaetodon rafflesii Bennett, 1830) belongs to the class of the Actinopterygii, the ray-finned fishes, to the order Perciformes and to the family of Chaetodontidae.

The name of the species rafflesii is a tribute to the memory of the British politician, military and colonial administrator Thomas Stamford Raffles (1781-1826) who founded the London Zoological Society and the city of Singapore, taking interest in the flora and fauna of Malaysia and Java.

It has a very vast distribution in the tropical waters of the Indo-Pacific. We find it in Sri Lanka, Thailand, Australia, Indonesia, New Guinea, Micronesia, New Caledonia, Vanuatu Fiji, Tonga, Tahiti and eastward up to the Tuamotu Islands archipelago. It reaches, northwards, the Philippines, Taiwan, China and southern Japan.

Not very common, it lives in shallow waters and along the borders of the reefs, among the madrepores rich in caches, up to 15 m of depth. It is, at times, also present in brackish waters.

The Latticed butterflyfish can reach the 18 cm, even if rarely it exceeds the 15. The body is flat, more or less oval, with pointed snout for seizing the food among the corals. 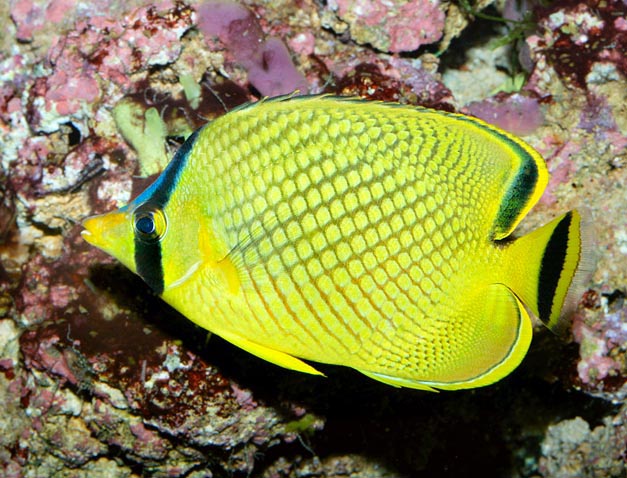 The colour of the body is yellow, with greenish shades, and the dark border of the scales forms a sort of network with nodes.

A black band, edged up of blue so as to cover the front, hides the eye, and a black pattern is present also on the tail and the back part of the dorsal fin.

During the night, the colour of the body fades and becomes almost white, whilst a showy dark spot appears in the fore part of the back, and also the frontal blue darkens. This is a mimetic pyjama and a warning, well visible in the darkness, for the conspecifics.

The juveniles are completely yellow with a black band on the eye.

The latticed butterflyfish is carnivorous, but with a varied diet. It doesn’t nourish only of polyps of madrepores and corals, but also of sea anemones, polychetes and other benthic animals.

It lives solitary or paired, especially during the reproductive period, when, after the fecundation, the eggs are entrusted to the currents.

The populations may double n less than 15 months and, aquaria trade apart, it is not chased by the man because it does not have any value as food. Consequently, its vulnerability index is very low: 15 per 100.