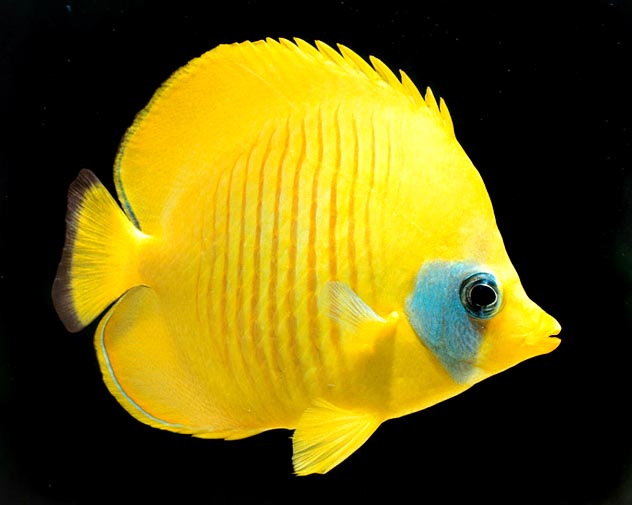 The Bluecheek butterflyfish (Chaetodon semilarvatus Cuvier, 1831), belongs to the class of the Actinopterygii, the ray-finned fishes, to the order of Perciformes and to the family of Chaetodontidae.

The name of the species semilarvatus comes from the Latin epithets “semi” = half and “larva” = mask; it is, therefore “half masked”, due to the blue spot covering only part of the head.

It is mainly present in the Red Sea and in the Gulf of Aden, but with small colonies also in other locations of the western Indian Ocean.

It swims in the shallow waters of the madreporic formations and along the border of the reefs, up to 20 m of depth. 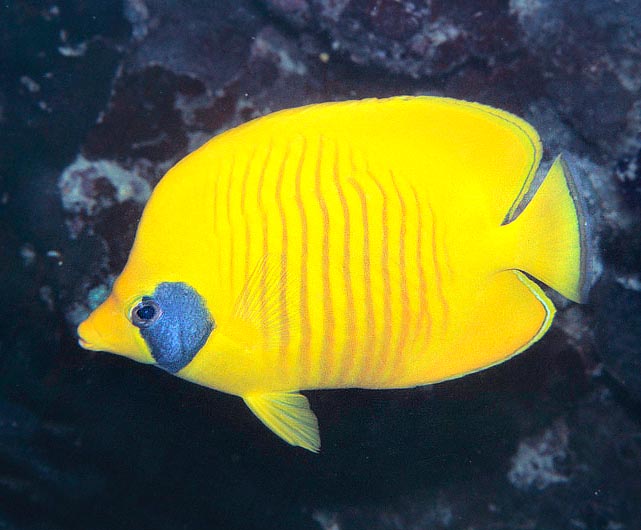 The snout is relatively short and solid for a butterflyfish, with the mouth able to swallow even preys of a certain size.

Starting from the pectoral fins, the body is crossed by 12 vertical bands of red-orange colour, whilst the background yellow fades in warmer tones in the direction of the yellow tail, ending in a brown band.

The bluecheek butterflyfish has a carnivorous diet based on madrepores polyps, but it nourishes also of molluscs, crustaceans and generally of the small fauna of the reefs.

It lives paired or in small groups of 10-15 individuals, resting, often still, in mid- water, under the madrepores of the genus Acropora, which reassure it, from the attacks coming from above.

The reproduction is not collective, but paired. The eggs are pelagic.

Although threatened by the degradation of the reefs and by the aquaria trade, it is a species decidedly not in danger, with populations which may double in only 15 months and with a very low vulnerability index: 19 per 100.