The Banded butterflyfish (Chaetodon striatus Linnaeus, 1758) belongs to the class of the Actinopterygii, the ray-finned fishes, to the order of the Perciformes and to the family of the Chaetodontidae.

The name of the genus Chaetodon comes from the Greek “χαίτη” (khaite) = hair and “ὀδούς” (odous) = tooth, due to the teeth shaped like bristles, whilst the specific one, striatus = streaked in Latin, refers to the dark vertical bands crossing the body.

The Chaetodon striatus is a fish of the tropical coasts of western Atlantic. It is present, centered on the Caribbean, from the coasts of Massachussets in USA to those of Santa Catarina in Brazil, and find it again eastward, in the middle of the ocean, more than 900 km far northeast of Natal, in Brazil, in the Archipelago of Saint Peter and Saint Paul.

It is a diurnal species that spins, often in couple, in the coral and rocky formations at 3 to 20 m of depth, reaching a maximum of about 55 m. During the night, in order to escape predators, the adults get shelter in the crevices whilst the juveniles grow often hidden in the seagrass meadows. 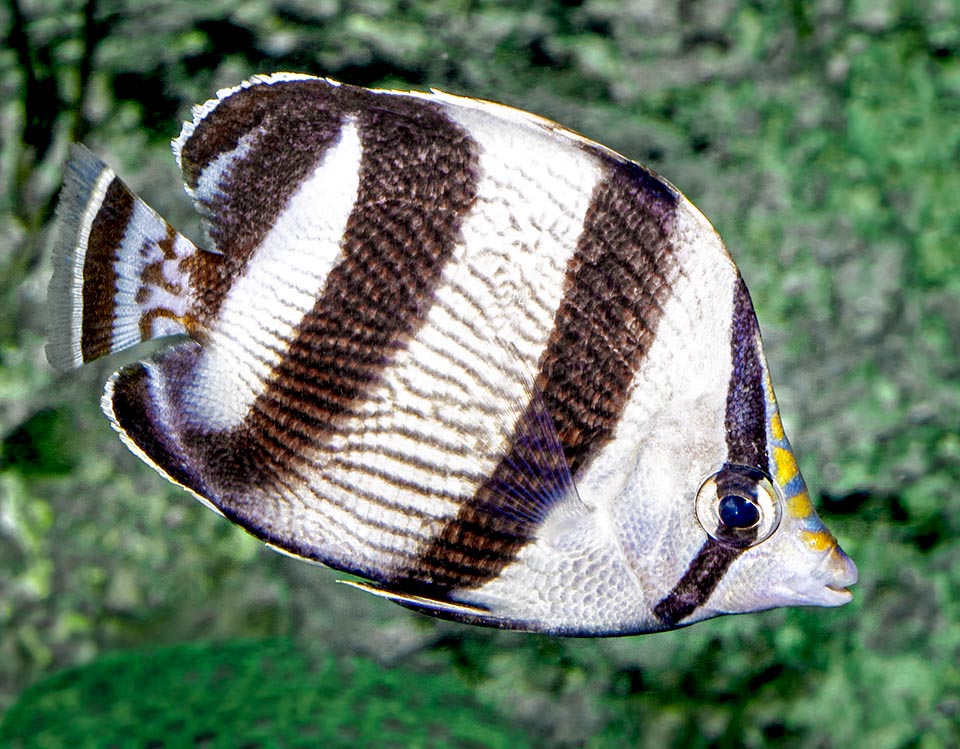 About 13 cm long, the Chaetodon striatus is a butterflyfish of western tropical Atlantic, present also also in the middle of the ocean, in St. Peter and St. Paul Archipelago © Giuseppe Mazza

The Chaetodon striatus measures generally 13 cm, with a maximum of 16 cm. The body, with the high back, very compressed laterally, is more or less oval. The snout is pointed with a small protractile mouth for catching the food among the corals.

The sparkling silvery livery is crossed vertically by 4 dark bands, typical to the species, and horizontally by several paler thin lines. The eye is camouflaged by the first band that crosses the iris and the young display also a fake black eye on the back towards the tail. These are very frequent tricks on the world of the corals to confuse and disconcert the predators.

The upper part of the snout is enriched by small yellow and blue belts, and apart the transparent pectorals, the fins are edged of black with a tiny yellowish border.

The Chaetodon striatus is carnivorous with a very varied diet. It does not nourish only of polyps of madrepores and corals, but also of polyketes, small crustaceans and eggs of molluscs it looks for during the whole day among the crevices. 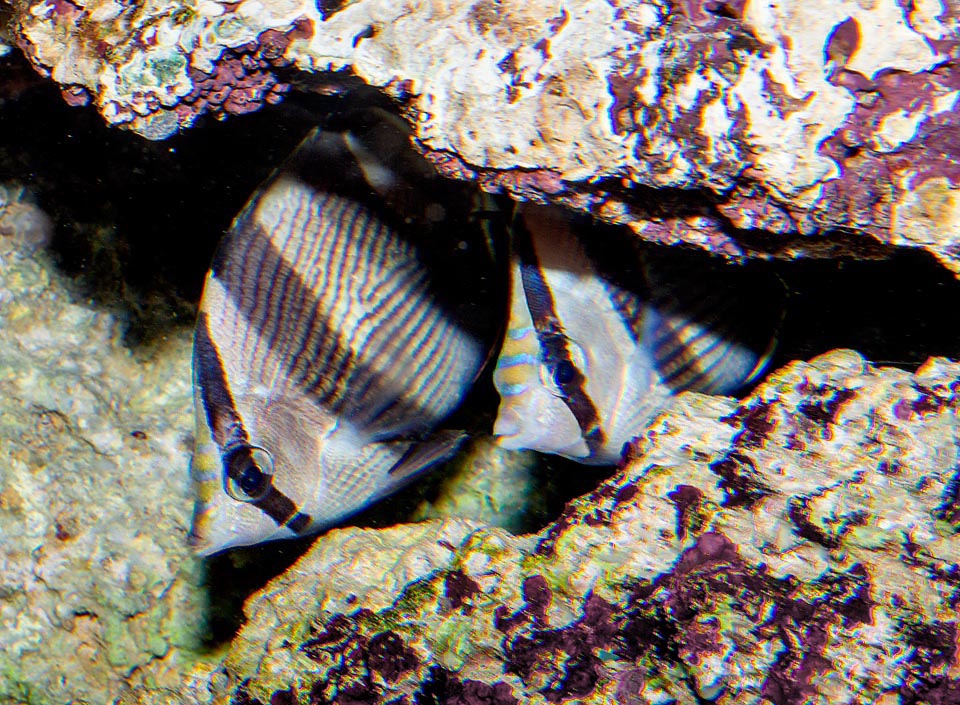 It lives in couples, eating during the day polyps of madrepores, polyketes, small crustaceans and mollusc eggs. In the night it shelters in crevices. The livery is extremely mimetic in the chiaroscuri of the habitat. The pelagic larvae are carried by the currents and the young reach bottoms often far from the place where they are born © Giuseppe Mazza

At times it behaves also as “cleaning fish”, freeing from small parasites the body of bigger species such as the Parrot fishes (Scaridae) or the Surgeon fishes (Acanthuridae).

Usually it lives in stable couples, but it is not rare to find it in small groups with about twenty individuals.

Mating takes usually place at the twilight. The female emits, swimming, 3000-4000 eggs fecundates on the flight by the male. Attracted by the event, sometimes other males collaborate to the insemination and may occur also hybridizations with similar species of the genus Chaetodon.

The pelagic eggs hatch quickly the day after. The larvae are carried by the currents for about 2 months, until when they transform in 12-15 mm small fishes that reach the bottoms, often very far from the place where they were born.

The populations can double in less than 15 months and, excluding the aquariological trade, it is not a species menaced by the man because has no feeding value. The vulnerability index is therefore (2020) very low, marking only 12 on a scale of 100.

Chaetodon striatus was last modified: May 3rd, 2022 by Peppino