The Triangle butterflyfish (Chaetodon triangulum Cuvier, 1831) belongs to the class of Actinopterygii, the ray-finned fishes, to the order of Perciformes and to the family of Chaetodontidae.

The name of the genus Chaetodon comes from the Greek “χαίτη” (khaite) = hair and “ὀδούς” (odous) = tooth, due to the “bristle-shaped teeth”. The name of the species triangulum = triangle in Latin, refers to the triangular pattern of the angled parallel brackets which do characterize its livery.

It is present in the tropical waters of the Indian Ocean and in a fairly modest area of the western Pacific. As an indication, we find it along the entire eastern African coast, from South Africa to the Red Sea and the Arabic Sea, in Madagascar, in the Seychelles, the Andaman, in Thailand, Singapore, Indonesia and Taiwan. 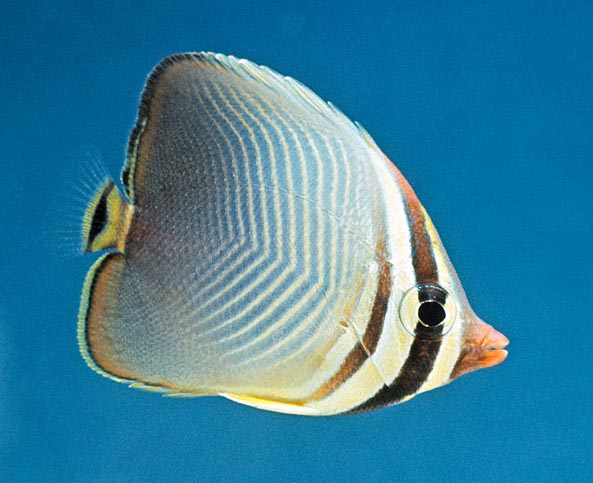 It lives in the madreporic formations up to 25 m of depth.

The triangle butterflyfish reaches, at most, the 16 cm. The body is flat, more or less triangular when the fins are spread. The snout is elongated in order to tear off the polyps of the madrepores.

The snout is reddish, as in the Chaetodon larvatus to whom, anyway, it resembles, but here the eye is masked by a dark band, followed by another band, smaller, and the typical drawing of bluish parallel angled brackets, on the general pale yellow background. The rear part of the body is darker and the patterns merge. Also the tail before the translucent zone, has a vertical black band, surrounded by yellow, more visible in the adults thus to confuse, by simulating a fake head, the predators.

It mainly lives in shallow waters, between the madrepores rich of ramifications and caches such as those of the genus Acropora, nourishing mostly of their polyps, even if other cnidarians belong to its diet.

During the reproductive period, pairs do take form, and after having abandoned the eggs to the currents often then keep staying together. The populations may double in less than 15 months, and even if the corals they nourish of are endangered by the climate changes, seen their vast diffusion in different habitats, the vulnerability index of the species is presently very low: just 13 per 100. Furthermore, they are not required by the aquaria lovers because, seen their particular diet, when at home they might rapidly pass away for starvation.