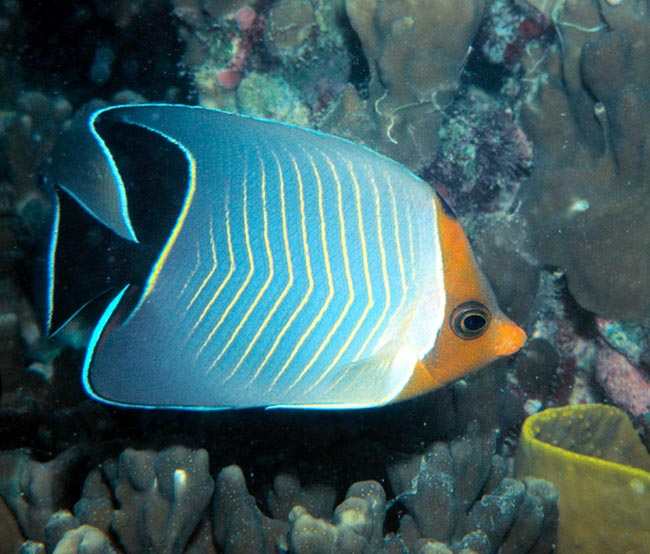 The Hooded butterflyfish or Orange-face butterflyfish (Chaetodon larvatus Cuvier, 1831) belongs to the class of the Actinopterygii, the ray-finned fishes, to the order of Perciformes and to the colorful family of Chaetodontidae.

The name of the species larvatus comes from the Latin “larva” = theatre mask. It is therefore a “masked fish” due to the orange zone covering the snout, thus rendering unnecessary the usual black mimetic band on the eye.

It is localized in the Red Sea and in the Arabic Sea.

It lives in shallow waters, among the madrepores rich of ramifications and caches such as the Acropora, up to 12 m of depth.

The Hooded butterflyfish does not exceed the 12 cm. The body is flat, more or less triangular when the fins are spread, with the snout slightly pointed. The dorsal fin has 11-12 spiny rays and 24-27 soft; the anal has 3 spiny rays and 21-22 soft; the ventral and the pectoral ones are unarmed; the caudal is more or less blunt. The background colour is blue-greyish with a herringbone pattern, formed by angle brackets parallel to each other of yellow colour, pointing towards the head. This appears to be a trendy pattern in the Red Sea, which partly recalls the look of the Chaetodon paucifasciatus also at home in the same zones. 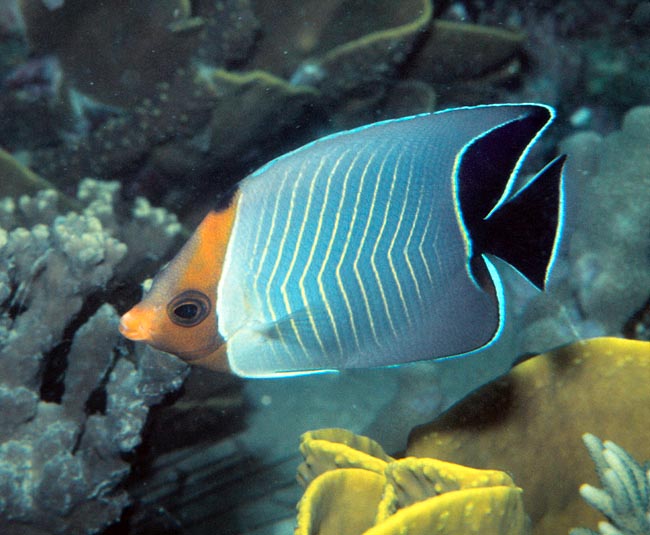 It is a territorial fish living in pairs. After the fecundation, the eggs are entrusted to the currents. The feeding is based on the polyps of various madrepores belonging to the genera Montipora, Echinopora, Acropora, Pavona, Porites and Stylophora.  The populations may double in less than 15 months and, excluding the aquaria trade, it is not a species haunted by man because it does not hold and alimentary value. It is true that the global warming, by destroying the corals, might be an element of risk, but thanks to its diversified diet, the vulnerability index of the Chaetodon larvatus is really very low: just 11 per 100.