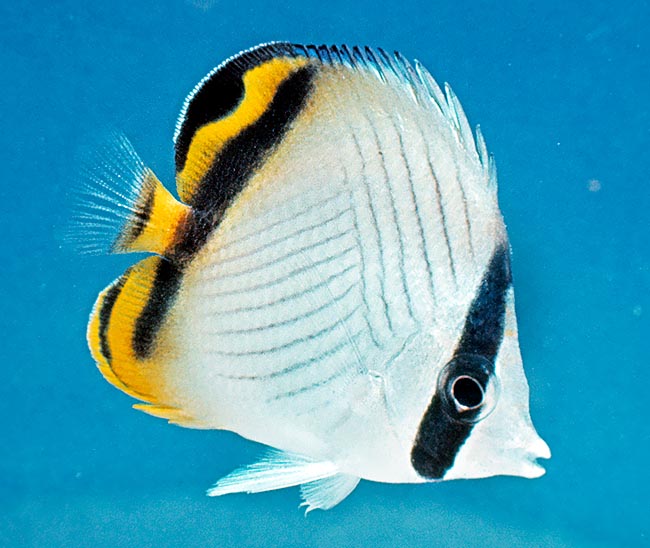 The very common Vagabond butterfly-fish (Chaetodon vagabundus Linnaeus, 1758) belongs to the class of the Actinopterygii, the ray-finned fishes, to the order of Perciformes and to the family of Chaetodontidae.

The name of the species vagabundus = vagabond in Latin, refers to the vast area of distribution of this fish, of more, after very recent estimations, than seventy million of square kilometres, and to the fact that it can be found in the most varied environments.

It is frequent in the tropical waters of the Indo-Pacific. We find it from South Africa and Madagascar up to the Red Sea and the Arabic Sea, the Seychelles, Maldives, India, Sri Lanka, Thailand, Malaysia, Australia, Indonesia, New Guinea, Micronesia, New Caledonia, Philippines, Taiwan and China up to southern Japan. Eastwards, it reaches the Fiji Islands, Tonga, Samoa, Kiribati, Tahiti and Tuamotu; southwards, Lord Howe and Easter islands.

It lives in varied environments. It is at home in the madreporic formations up to 30 m of depth, but also offshore, among the rocks covered by seaweeds and even in the murky waters where fresh water flows.

On the background colour, yellowish white, we note two series of parallel lines, perpendicular to each other like the Chaetodon auriga, one mimetic black vertical band on the eye, another at the level of the caudal peduncle, and a third one, symmetrical to the eye, on the caudal fin of the adults. The final part of the body is coloured in yellow.

Upward, at the end of the dorsal fin, the juveniles show a roundish black spot, similar to a fake eye, which eventually disappears reducing to a dark trait.

It lives usually in stable pairs, with a small territory they defend against their conspecifics, whilst they keep mostly indifferent to the intrusion of other fishes. They eat polyps of madrepores, polychetes, sea anemones and algae. After the fecundation, the eggs are entrusted to the currents.

In some zones, the populations have met strong reductions due to the death of the reef because of the global warming, but elsewhere they are untouched and in condition to double in less than 15 months. The varied diet is another element which is favourable to the species, and even if the young specimens feed the aquaria trade, the vulnerability risk is low, with an index of 19 per 100.