The species is native to Guatemala, Honduras and Mexico (Oaxaca and Vera Cruz) where it lives in the underwood of the mountain humid forests, between 900 and 1500 m of altitude.

The name of the genus is the combination of the Greek adverb “χαμαί” (chamai) = on the ground, on the soil, and of the substantive “δωρέα” (doréa) = gift, the German botanist Carl Ludwig Willdenow (1765-1812), who created the genus in 1806, did not specify the exact meaning of the name. The specie is honoured to the German naturalist and collector Hand Freiherr von Türckheim (1853-1920), who discovered and colected it in Guatemala.

The Chamaedorea tuerckheimii (Dammer) Burret (1933) is a rather variable dioecious species with solitary stem, erect or decumbent, 0,3-0,8 cm tall and of about 0,5 cm of diameter, of green colour with the rings trace of the fallen leaves, spaced 0,5-1,5 cm, prominent. The leaves, numerous, on a 4-6 cm long petiole, are simple, plicate, elliptical to obovate, with rounded apex, occasionally just bifid, and crenate-toothed margins of white or pale green colour, 12-22 cm long and 4-10 cm broad, coriaceous, of bluish green colour or intense green spotted of pale green (Mexican populations), velvety. The tubular foliar base, obliquely open at the apex, 5-8 cm long, wraps entirely the stem for about half of its length. Erect inflorescences between the leaves (interfoliar), on a thin ascending peduncle, 6-8 cm long, initially green, then orange in fruit.

The male inflorescences are ramified, with 7-15 rachillae, 6 cm long, of whitish colour bearing rather spaced flowers of the same colour, of about 2 mm of diameter. Spiky or bifid female inflorescences, 5-6 cm long rachis, initially green, then orange when in fruit, with rather spaced and sunken flowers, of about 2 mm of diameter, of white colour. 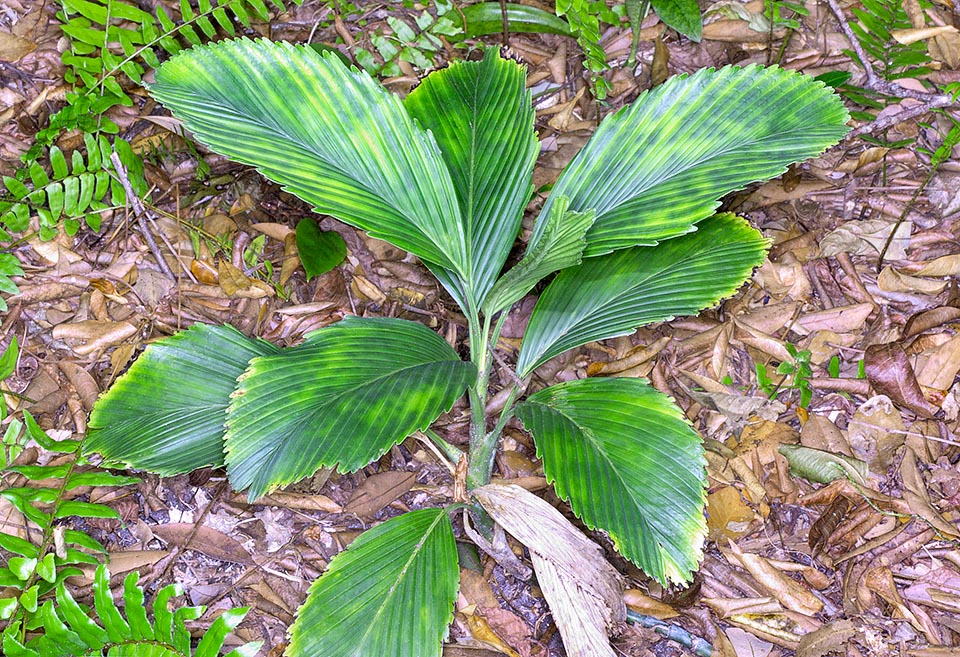 Native to Guatemala, Honduras and Mexico, Chamaedorea tuerckheimii is a dioecious species with a 30-80 cm solitary stem and of about 0,5 cm of diameter. Among the Chamaedorea it distinguishes for the reduced dimensions, the shape of the leaves and their particularly attractive look. Rare in cultivation. Also in pot is not an easy plant © Giuseppe Mazza

It reproduces by seed, previously kept in water for two days, in particularly draining loam maintained humid at the temperature of 26-30 °C, with times of germination starting from 2-3 months.

Species distinguishing from the congeners due to the reduced dimensions, the shape of the leaves and their particularly attractive look, and for this reason quite sought for, with consequent indiscriminate collection in nature, where its presence has drastically reduced in few years, except in zones particularly difficult to reach. Despite this, the seeds as well as the plants are not easy to be found and consequently it remains fairly rare in cultivation.

Utilizable in open air, solitary or in group, in tropical and subtropical humid climates, its cultivation may be tried in the mildest temperate-warm ones, where temperatures around 0 °C are short lasting exceptions. It requires a slightly shady to a shady position, sheltered from the wind and perfectly draining soils, rich of organic substance, acidic to neutral, maintained constantly humid. The dimensions and the beauty of the foliage render it particularly suitable as pot plant, even if needing a not easy cultivation, for the decoration of open spaces and of inner ones. It needs draining and aerated loams, regular waterings, but without stagnations, local humidity rather high and a good ventilation.

It does not stand salts accumulation at the roots, in presence of water rich of limestone and minerals it is better to dilute it with rainwater, if available, demineralized of by reverse osmosis. For the same reason the fertilizations must be done with moderation, utilizing hydrosoluble products with microelements in the form of chelates, appropriately diluted in respect to the dosages suggested in function of the size of the plant. In the closed spaces it is easily subject to attacks of parasites, particularly mites, it is therefore to be frequently controlled in order to take prompt action with specific products.