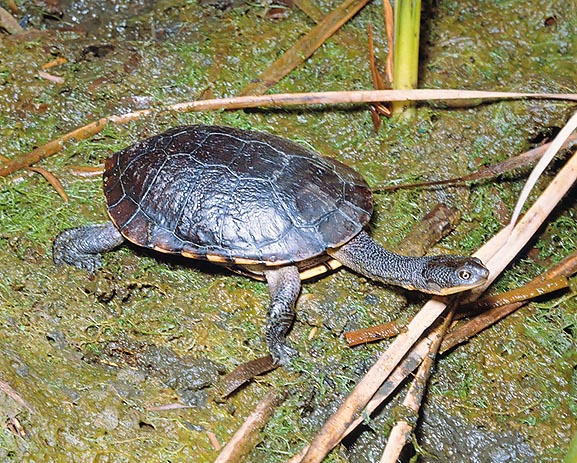 The Common snake-necked turtle (Chelodina longicollis Shaw, 1794) is a member of the group of the Anapsids (Anapsida, please refer to the text Chelonia for the relevant meaning), afferent to the class of the Reptilians (Reptilia), to the order of the Chelonians (Chelonia), to the suborder of the Pleurodires (Pleurodira), and to the family of the Cheliids (Chelidae), genus Chelodines (Chelodina).

The Pleurodires (Pleurodira), are the turtles which fold their long neck laterally in the carapace, instead of pulling it back inside it. The common name of snake-necked turtle, as it is called by the local Australian populations, which hunt it for eating its flesh as well its eggs, comes from the long neck of this unusual reptilian, resembling to that of a serpent. The IUCN, nowadays, declares the status of this turtle as common.

This species is endemic to eastern and south-eastern Australia. 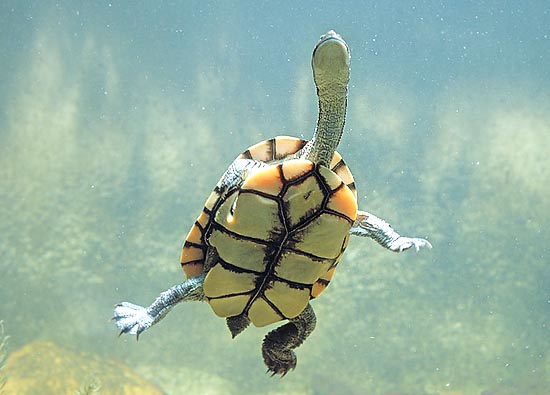 Like a periscope the long neck allows it to sight, hidden, foes and preys © Giuseppe Mazza

It is an electively piscivorous species, but it does not disdain amphibians, crustaceans, insects and molluscs.

Its activity is mostly diurnal.

The extremely long neck, of cylindrical shape, with a warty skin, is the morphological characteristic distinguishing this turtle.

The carapace is dark brown, wide and flattened with black edged scuti.

The plastron is yellow, and is also flattened.

The feet are equipped with ample inderdigital webs and four sharp nails.

The long neck, that may be longer than the carapace, is utilized almost as the “periscope” of a submarine, keeping, thanks to it, out of the water only the head, allowing the animal to sight the preys out of the water, such as frogs, as well as possible predators, such as, for instance, a crocodile. The length, somewhat bigger in the female (only somatic character distinguishing the two sexes), is of 20-25 cm. 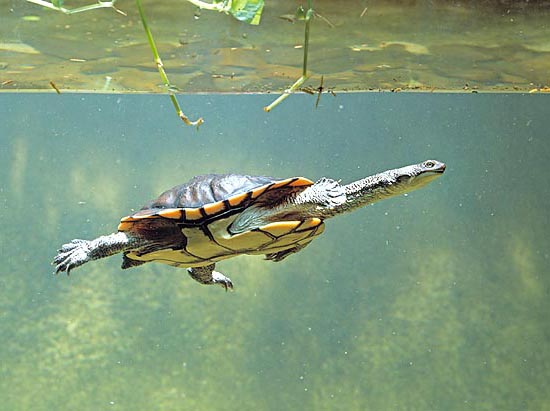 This turtle loves basking under the sun on the semi-submerged logs or between floating vegetables, but cannot be easily approached and, always alert, jumps into the water at the least sign of danger.

During the dry season, the Chelodina longicollis may migrate on the ground, performing also long passages looking for a source of water. When disturbed, both male and female emit a whitish liquid, strongly repellent, of bad smell, through a musk gland.

Not many data are available concerning their reproductive biology. What is known is that the female lays from 2 to 10 eggs, of a dark white colour, in the wet soil, grassy as well as sandy, possibly by night and after a heavy rainfall.