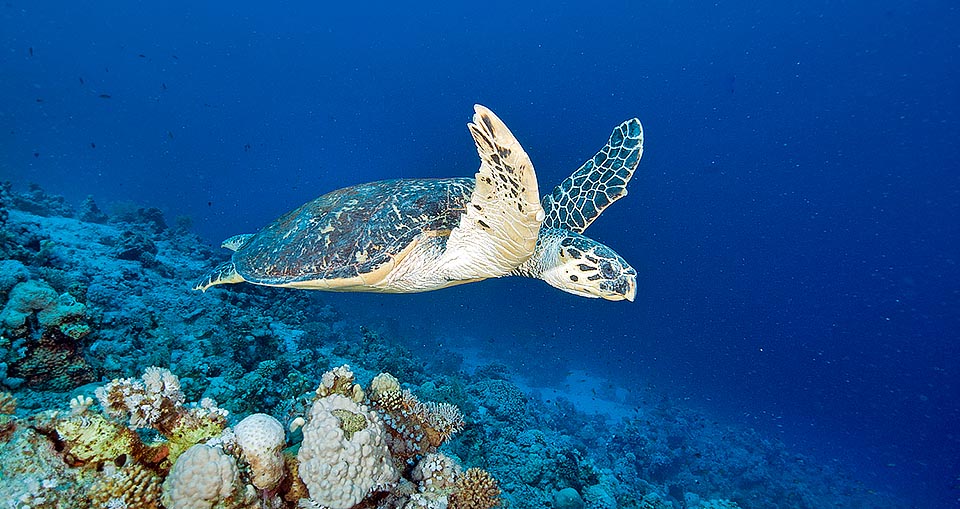 Chelonia mydas is present in tropical and subtropical belts of all oceans. In Mediterranean is met only in the warm eastern basin waters © Gianni Neto

The Green turtle (Chelonia mydas Linnaeus, 1758) is a sea turtle. It therefore belongs to the class Reptilia and to the order Testudines, family Cheloniidae.

The name of the genus Chelonia comes from the Greek Χελώνη (Khelônê), name with which the old Greeks rightly identified the turtles. The myth says that Khelônê was a nymph trasnformed in turtle by Zeus, thus being able to always carry her house in the shoulders as conviction for her laziness. Also the specific epithet mydas comes from the Greek, and means “humid”, referring to its aquatic habitat.

Chelonia mydas is distributed in all the Oceans, in the tropical belt and, in lesser extent, in the subtropical one. It s also present in the Mediterranean, even if almost exclusively in the eastern basin, warmer. 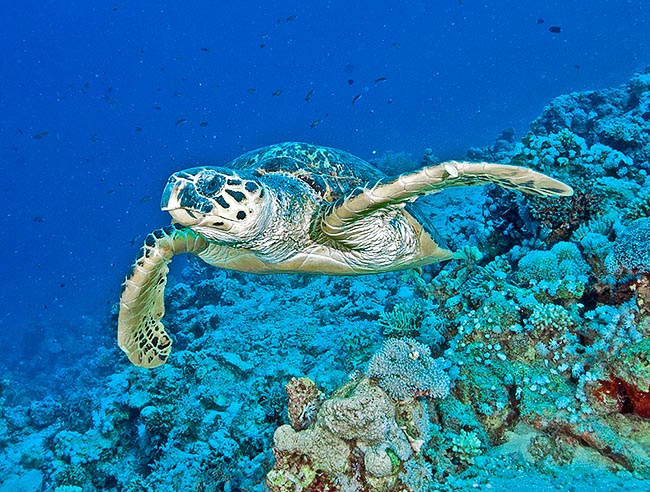 Though its migratory movements are not much known, this species is able to cover huge distances.

Like many sea turtles, the green turtle is a species with vast distribution and is found in many different habitats during its vital cycle and the habits vary with respect to the various populations.

The nidification sites are distributed in eighty different countries and it is thought that it can occupy the coastal waters of at least 140 nations.

It is a herbivorous turtle, the only one among the sea turtles, and its diet is formed mainly by marine phanerogams: for this reason it is easier to find it close to the seagrass meadows, in shallow waters.

The major nidification zones are: the Caribbean coast of Costa Rica, where averagely go to reproduce about 22.000 females, and the Australian Great Barrier reef, where the reproductive population is estimated in 18.000 units.

Usually Chelonia mydas, when adult, performs two big migratory movements that may be substantially resumed in reaching the trait of sea close to the beach where they will go to lay the eggs, that gets the name of “internesting habitat” (the green turtles occupy this habitat only during the mating season) and getting back, once the deposition is done, in the foraging zones, that is where they feed, for the period between one deposition and the following one, variable depending on the populations, but usually included between two and four year.

The extension of the internesting habitat varies depending on its complexity: usually the coral reefs, that represent the biggest complexity, correspond to small distances between the female and the beach where it will go to lay the eggs, whilst for less structured habitats the individuals may even occupy areas tens of kilometers far away. 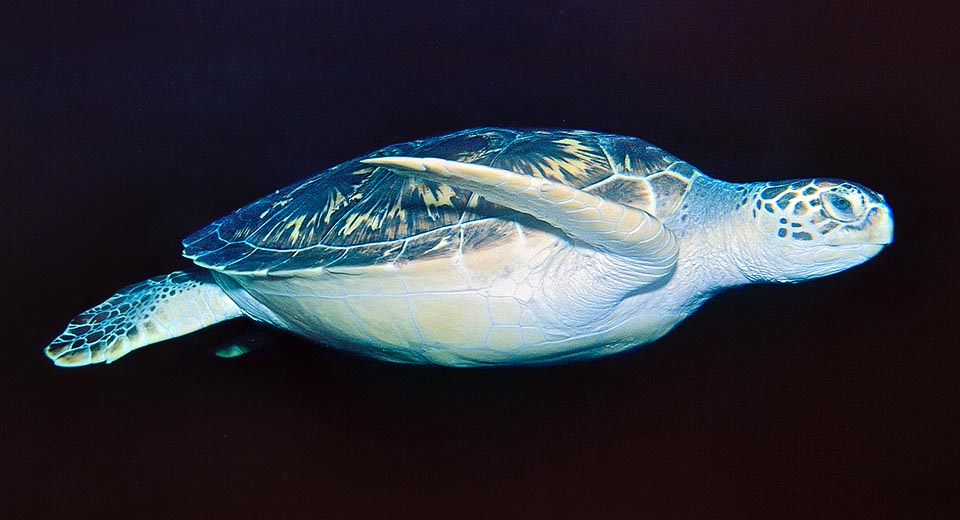 Young think only to eat leaving the currents to drag them. Conversely the adults move periodically from the reproduction phase to the foraging one © Giuseppe Mazza

Chelonia mydas differs from Caretta caretta as having the dorsal shell with 4 costal scutes, instead of 5, ans one caudal scute instead of two. In this species, the carapace has a pronounced hump. The scales are not imbricate, that is, do not overlap. Usually we have four pairs of costal scales, and on the head we find a pair of prefrontal and no preocular scale. The maximum size if of about one metre of length per more than 130 kg of weight. With this size Chelonia mydas is the biggest sea turtle of the family of the Cheloniidae. The herbivorous diet contributes to the colour of the body fat of the animal, and to this is due the common name of sea turtle.

Chelonia mydas is an endangered species because of the pollution of the seas and the fishing; for this reason it is not rare to find turtles injured by the propellers of the boats, getting injuries from ingestion of hooks or trapped into the nets of the fishermen. 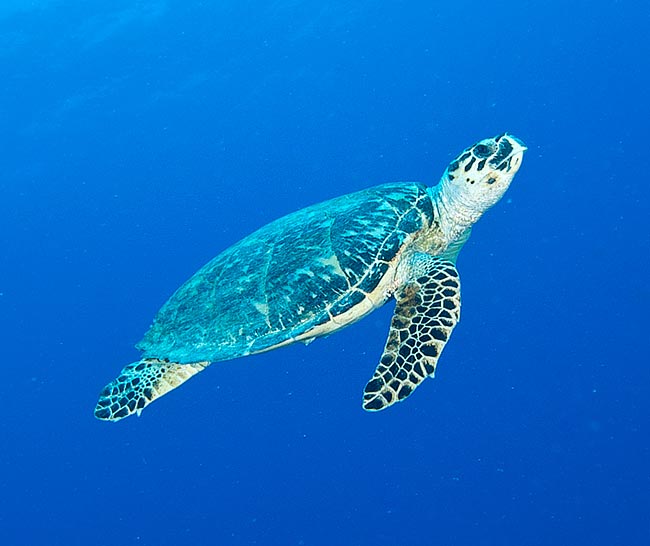 About one metre long per more than 130 kg. The herbivorous diet, based on buds, contributes in the colour of the animal body fat, and from this arises the vulgar name of green turtle © Gianni Neto

The green turtle produces different behaviours depending on the season and the vital cycle observed. If when young it limits to feed and to get carried passively by the currents, when adult its life can be divided in four big portions: the foraging phase, the reproduction one, and the two phases where the animal moves between the two sites, the reproduction and the foraging ones.

The foraging phase is that where the animals nourish almost continuously especially of the buds of marine phanerogams. The preference for the youngest leaves is probably due to the fact that these ones are richer in proteins and less in fibres, and represent a more digestible and energetic source of food.

After some years the animals move towards the areas where they will go to reproduce, and where they practically will stop feeding.

Courting behaviours have been obser- ved, and usually the female gets the attention of more males.

In spite of multiple couplings with different males each nest has one father only and the promiscuous mating does not reflect in a diversity of fecundation. During the two migratory movements the green turtles show different modes of swimming, from prolonged submersion (the maximum registered in nature is of 215 minutes, the deepest 135 metres) or from periods of short submersions at a depth of a few metres, where probably the animals find the best conditions for swimming in an effective and not too consuming way. Usually, during the day, the animals prefer to swim close to the surface and breathe often, whilst in the night they prefer the long dives. The average speed has been estimated between the 1,5 and the 2 kilometres per hour.

Like many marine turtles Chelonia mydas is a species covering huge distances and during its vital cycle utilizes an ample range of different habitats and occupies various locations. 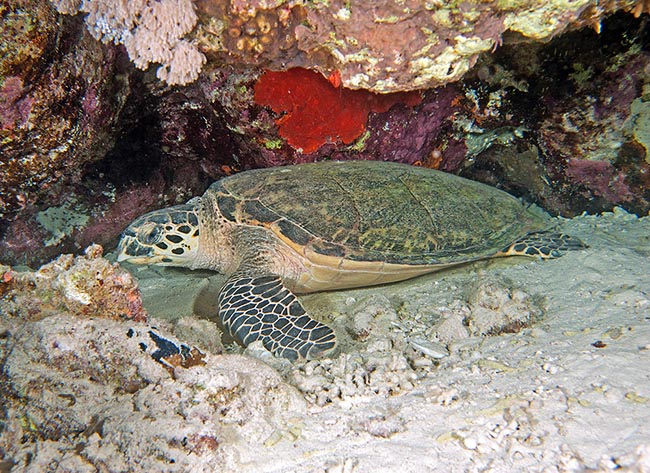 Usually by day the animals prefer to swim close to the surface and breathe often, whilst by night <br />they love long dives. The duration record is of 215 minutes and the deepest of 135 m © Gianni Neto

The hatchlings leave the beach when just born and it has been hypothesized that they meet an “oceanic” phase as happens for Caretta caretta.

Passively transported in this phase by the oceanic currents the animals limit to grow up until when, after several years, they are capable to overcome the currents and to swim till when they reach again the neritic waters.

In this moment of their vital cycle the young turtles have a CCL of about 50 cm (CCL: this is a typical measure for monitoring the marine turtles and for figuring out the age of the animal, it consists in the length of the carapace taken from the head up to the tail measuring the whole extension of its dorsal curve).

Once the coast regained, the specimens of green turtle begin to feed of weeds and of marine phanerogams, reaching in this area the sexual maturity, that occurs in an age estimated between the 25 and the 40 years.

When the adult reaches the maturity it goes looking for its coupling area. The females, depending on the populations, go back to the beach where they were born every two-four years to lay about 140 eggs in holes of depth varying from the 30 and the 50 cm. After about two months of incubation come to life nestlings of 50 mm of length and of about 25 grams of weight.

The male/female ratio is temperature-dependent, where the temperatures are lower than the 26 °C they produce only males, whilst when over the 30 °C the brood is skewed towards the females.

Usually, the peak of births occurs between late spring and early summer. The nestlings getting out from the nests reach the water crawling on the sand with the strength of the legs they move alternately. Strangely, the modality of movement on the mainland changes in the adult, who moves in unison both fore legs, leaving behind an unmistakable furrow, mark of its passage. 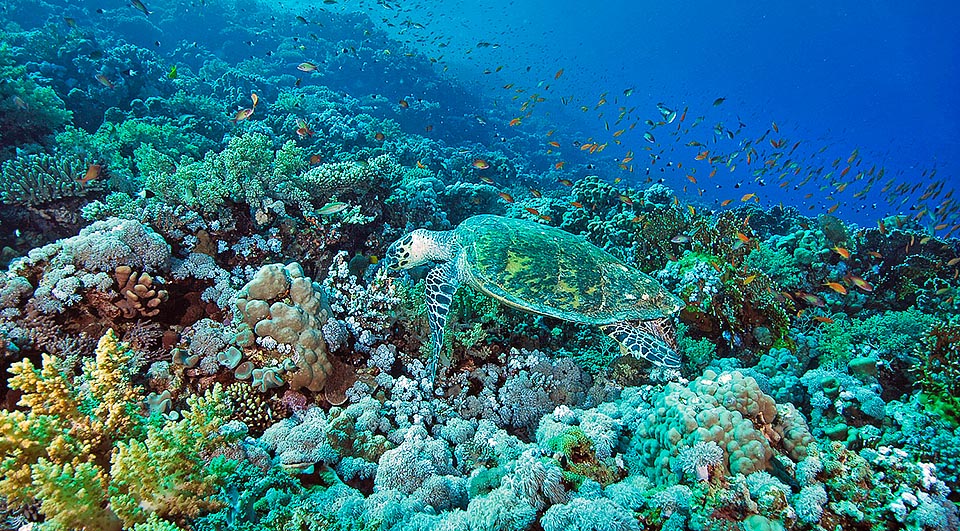 By the end of the mating season the adults go back to their foraging areas, whilst the young are carried offshore by the currents.

Chelonia mydas was last modified: May 3rd, 2022 by Giuseppe Mazza