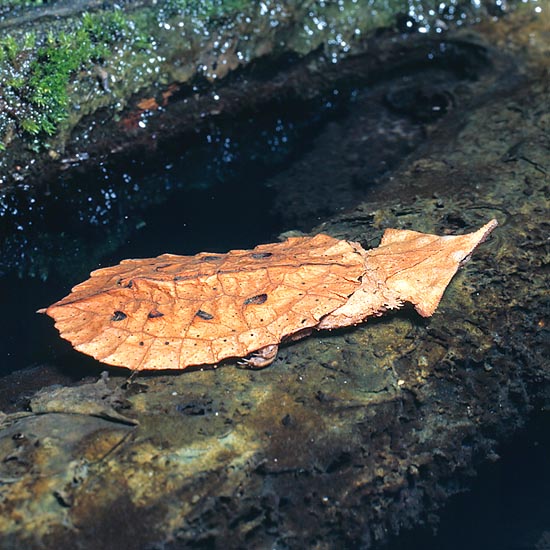 The Matamata or Leaf turtle or Fishing turtle (Chelus fimbriatus Schneider, 1783) is an Anapsid (Anapsida), afferent to the class of the Reptilians (Reptilia), order of the Chelonians (Chelonia), suborder Pleurodires (Pleurodira), family Cheliids (Chelidae), genus Chelus.

It is one of the most curious turtles as it resembles to a dead leaf floating on water, camouflage useful for escaping predators such as the caimans and the alligator snapping turtles, but also for catching, in ambush, the preys.

The IUCN declares for this reptilian a status of locally common.

It is present in South America, northern and central; it is found in the Amazon and the Orinoco Basins.

It is also present in the Island of Trinidad, even if with a low density. In the past they have tried to import it in Florida for breeding it in the wild, but the efforts to adapt it in this region seem to have failed.

This chelonian has a specifically nocturnal activity. It mostly lives in the bottoms of the slow flowing waterways, where it catches its preys, consisting mainly in fishes, from where it gets the name of fishing turtle. It stealthily seizes the preys approaching them quite slowly. Once close to a fish, it suddenly opens completely the wide mouth, creating an inward movement of water faster than the fish itself. It is also present in the watering lakes, pools and ponds. The matamata rarely ventures on land, and when it does so, it never basks in the sun. 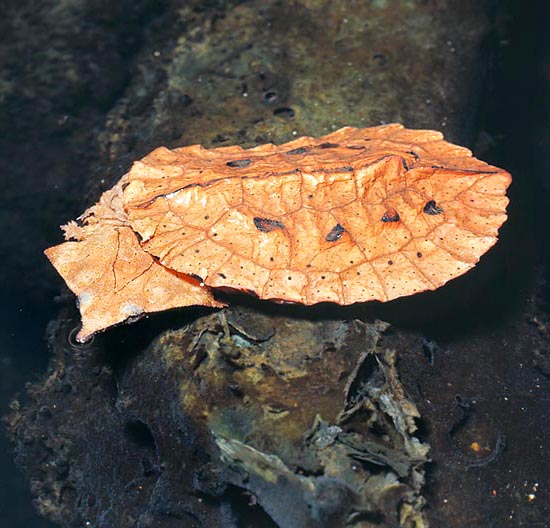 The Chelus fimbriatus, as already briefly said, is perhaps the oddest turtle known to the Biology.

It is a lateral necked turtle. It has a wide olive-brown carapace, with three rows of keels and a long and pointed neck. The triangular, or arrowhead-like, head has some sensorial fringes and skin flaps through which it may perceive, in the water, the presence of the preys and predators in the proximity; it is covered, in the upper side, by thorny tubercles.

The eyes are small, the eardrums are external and big, and the snout ends in a small thin trunk which it uses as if it were a “snorkel”, breathing while keeping the head underwater.

The females, although slightly, are a little bigger than the males, the lengths vary from 30 to 40 cm; apart this somatic difference, the males, at the same age, have a longer and more robust tails, as well as a concave plastron, whilst the females do have a longer neck.

Actually, these differences are not so much clear, therefore, also for a biologist, it is not so easy to distinguish the sexes, without doing first a careful observation.

Obviously, this is an oviparous species. The moment of the spawning is one of the few cases when this turtle leaves the water for the land; as a matter of fact, also the mating takes place in water. The female digs a 20-30 cm deep hole, a few metres away from the shore, in order to avoid the destructive effect of a possible flood. Therein, it lays 12-28 cleidoic eggs which have an incubation time of about three months. The newborn, as soon as out from the shell, behaving as an apt-presocial offspring, move independently and individually towards the water.