The species is native to Arunachal Pradesh, Assam, Bhutan, Darjeeling, Java, Nepal, Laos, Myanmar and Thailand where it grows on the deciduous or semi-deciduous forests, often at the margins of water streams, up to about 600 m of altitude, in zones characterized by seasonal climate, warm humid from spring to autumn, cooler and drier in winter.

The name of the genus is the combination of the Greek substantive “χεῖλος” (cheilos) = lip and of the adjective “σχιστός” (schistόs) = divided, notched, with reference to the labellum of the type species; the specific name is the combination of the Latin substantive “luna, ae” = moon and of the verb “fero” = to carry, with reference to the semi-lunate callus (fleshy growth at the base of the labellum).

The Chiloschista lunifera (Rchb.f.) J.J.Sm. (1905) is a monopodial epiphytic species, normally without leaves, with extremely reduced stems and greenish roots quite flat that perform the chlorophyll function; at times, if the light is not sufficient, can appear 1-2 leaves that fall in short time. Racemose inflorescences up to 20 cm long bearing 5 to 20 scented flowers, of 1-1,6 cm of diameter, with ovate-elliptic petals and sepals, about 0,8 cm long and 0,6 cm broad, of brown red colour edged of pale yellow, and trilobed labellum, 0,8 cm long, with saccate median lobe and curved lateral lobes on the sides of the column, of white or yellowish colour with brown red spots. 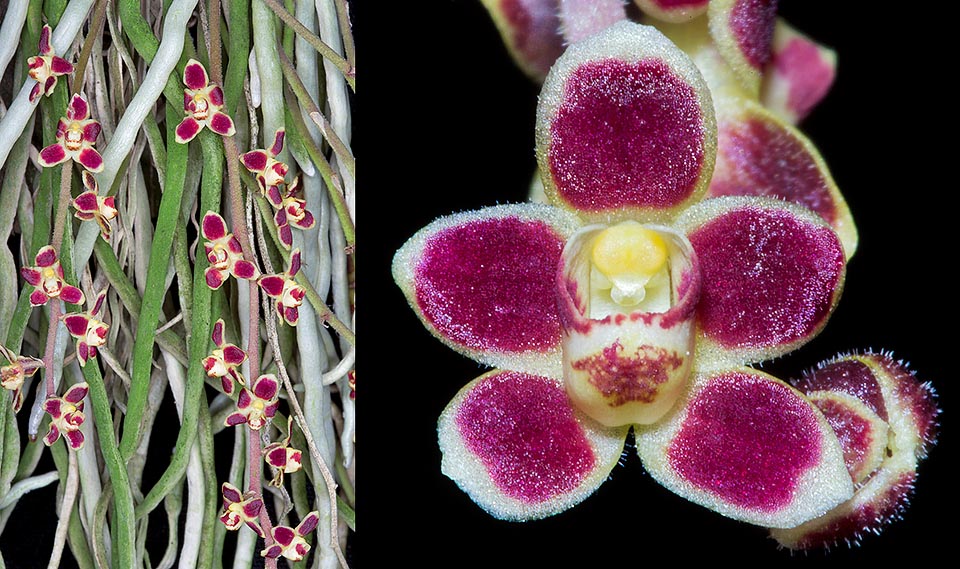 Native to the deciduous or semi-deciduous forests of South-East Asia, Chiloschista lunifera is a small arboreal epiphyte, usually with no leaves, with extremely reduced stems and greenish roots quite flat that care the chlorophyll function. A miniature orchid with showy scented tiny flowers of 1-1,6 cm of diameter © Giuseppe Mazza

It usually reproduces by seed in vitro. The seeds have a particular behaviour, they present, simplifying at the maximum, at one extremity like some microscopic tentacles formed by compressed filaments spirally wrapped, when the seed is moistened these stretch to reach a length of some mm, it seems that this will serve to facilitate the anchorage to the bark of the trees (Barthlott, W. & Ziegler, B., 1980).

Miniature orchid of particular appearance, floriferous and of easy cultivation, needs high luminosity, but not direct sun, medium-high temperatures, 24-30 °C, during the vegetative period, whilst in winter is good a high daily thermal excursion, around the 8-10 °C, with night values of 12-14 °C. The waterings and the nebulizations must be frequent during the growth period, but allowing the roots to dry up before giving water again, sligthly more spaced during the resting period, high ambiental humidity, 70-85%, and constant ventilation. Monthly fertilizations from spring to autumn utilizing a hydrosoluble balanced product, with microelements, at ¼ of the dosage, or less, suggested by the producer. It is to be mounted on pieces of trunk, of bark or cork or arborescent ferns roots rafts, bare rooted, in way to receive without any hindrance the light necessary for the photosynthesis.