The species is native to China (Fujian, Gansu, Guangdong, Hebei, Henan, Jiangxi, Shaanxi, Shanxi, Sichuan and Yunnan), Japan, South Korea and Taiwan, where it grows in the forests and thickets, mainly along the water streams, from the sea level up to about 3000 m of altitude.

The name of the genus is the combination of the Greek substantives “χιών” (chion) = snow and “ἄνθος” = flower, due to the abundant white blooming of some species; the name of the species is the Latin adjective “retusus, a, um”= obtuse, blunt, with reference to the rounded apex of the leaves.

The Chionanthus retusus Lindl. & Paxton (1852) is a shrub or deciduous tree usually dioecious, but some male individuals can have also hermaphrodite flowers, up to more than 20 m tall in the old specimens in nature, much lower in cultivation, with smooth bark of brown grey colour tending to flake and fissure with the age. 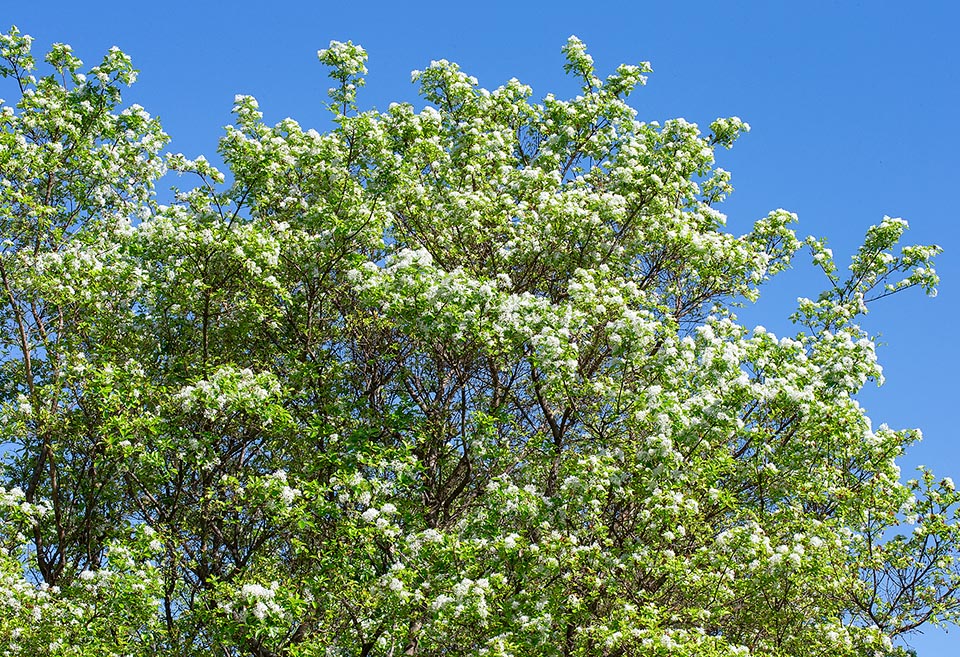 Native to China, South Korea, Japan and Taiwan the Chionanthus retusus is a shrub or deciduous tree, generally dioecious, that can reach the height of 20 m. Some male plants have also hermaphrodite flowers. It often grows along the water streams, in forests and thickets from the sea level up to 3000 m of altitude, bearing the -20 °C © Giuseppe Mazza

The leaves, on a 1-2 cm long hairy petiole, are opposite, simple, oblong-elliptic to obovate with acute, obtuse or emarginate apex, entire or slightly serrate margin, hairy along the veins and slightly pubescent below, 4-12 cm long and 2-6 cm broad, of glossy dark green colour above, paler below.

The inflorescences are terminal panicles, 5-8 cm long and 5-10 cm broad with numerous flowers, on a 0,5-2 cm long pedicel, of pure white colour, that emanate a sweet fragrance; the male plants usually have a more abundant blooming, but less perfumed than the female ones. Calyx, 1-3 mm long, with 4 lanceolate lobes, corolla with 4 linear-oblanceolate lobes, 1,5-2,5 cm, merged at the base in one 2-4 mm long tube, 2 stamens and bilocular superior ovary. The fruits are ovoid drupes of blackish blue colour and covered by waxy patina, 1-1,5 cm long and of 0,5-1 cm of diameter, containing only one seed.

It usually reproduces by seed, having low rooting percentages by cutting, that easily germinates after warm/cold layering (at 20 °C for 2-3 months, at 10 °C for 2 months); the varieties are propagated by grafting. 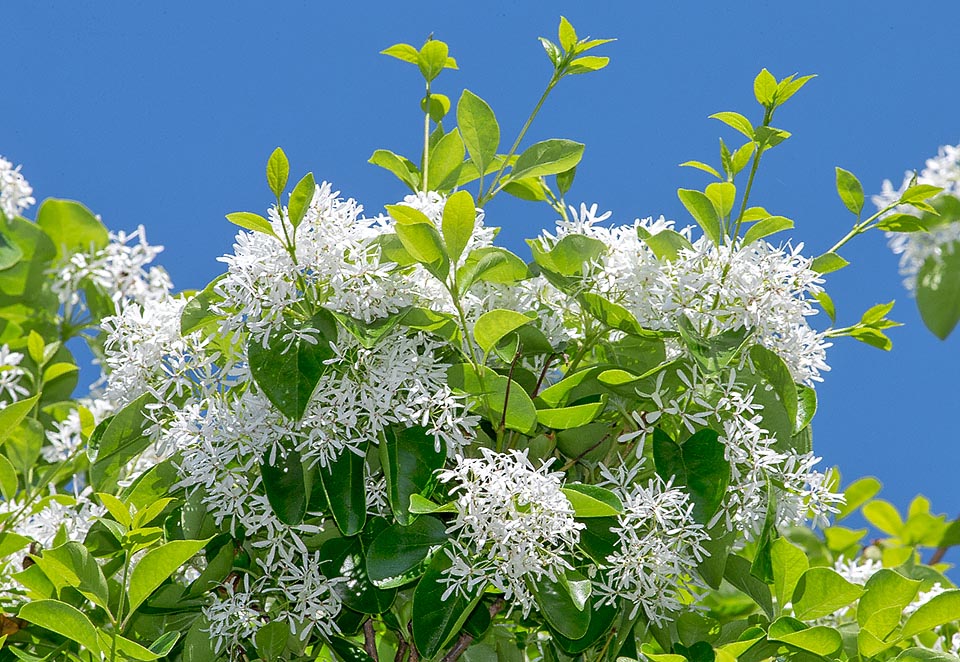 The copious and perfumed blooming in late spring-early summer can even hide the foliage. Of slow growth. It bears the drought and the urban pollution © Giuseppe Mazza

Among the most ornamental shrubs or trees for the temperate zones, where it can bear temperatures up to about -20 °C, for the abundant and perfumed blooming that in late spring-early summer may even hide the foliage, utilizable as isolated specimen, in group or as road tree, having proven resistant to urban pollution.

Various varieties have been selected that distinguish for abundance of the blooming, posture and shape and colour of the leaves. Of relatively slow growth, requires full sun, for a richer blooming, or slight shade, and is not particularly demanding about the soil, provided draining, even if it prefers the fertile, deep, acidic or neutral ones, maintained almost constantly humid, as it does not bear long dry periods. It can be cultivated also in capacious containers and is an excellent subject for bonsai. The fruits are a source of food for the avifauna.